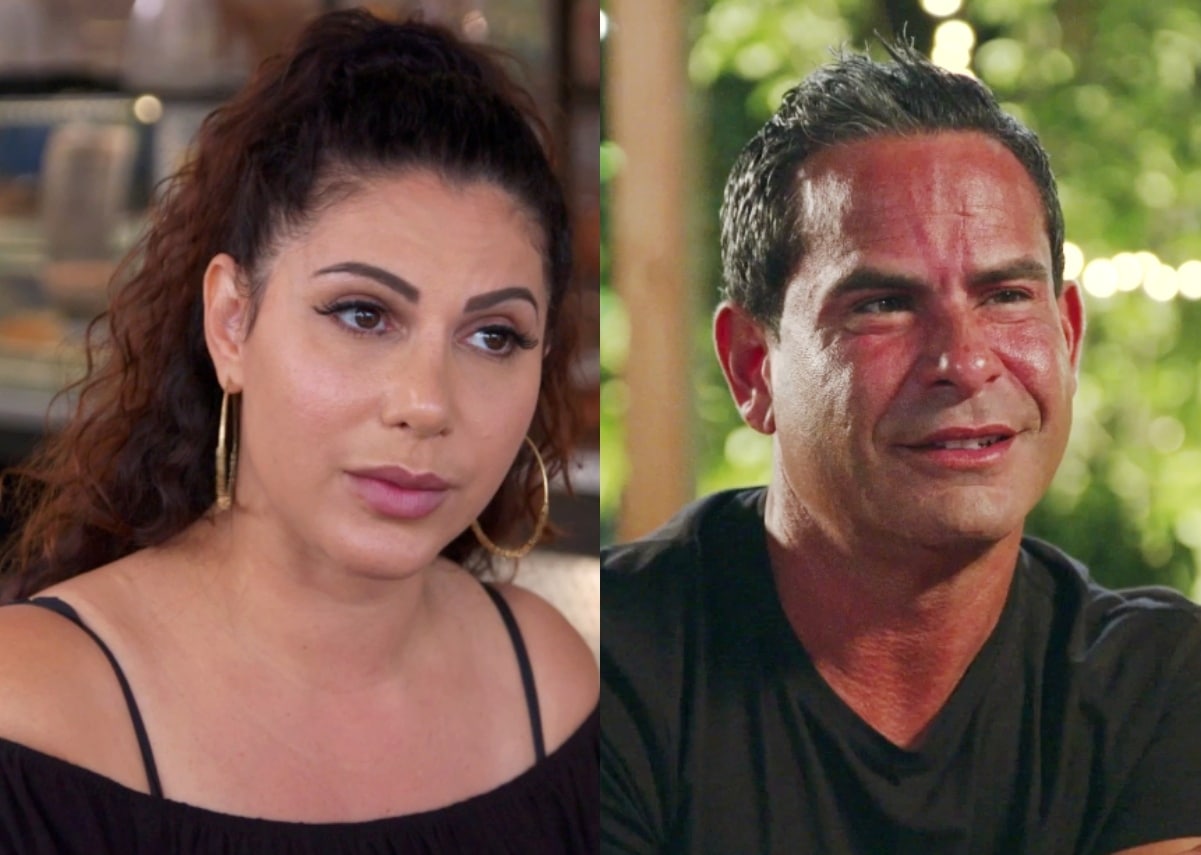 This week on the Real Housewives of New Jersey, Bill and Louie are both in the hot seat. How will they handle the scrutiny of the dog pack of rabid b*tches? Let us watch and see the drama unfold, shall we?

Frank goes after Bill to try to get him to come back to the table and be interrogated by these posers. Evan sees Bill as an accomplice when Jennifer was digging for dirt on him. I do not agree with that since Bill tends to stay out of this nonsense since he obviously had his own affair to hide.

Bill tells Frank they have all crossed a line. He does not want to stay anywhere where he is not wanted. Bill defends Jennifer saying she was just asking questions about the Evan rumor that Teresa spread. He does not understand why Jennifer is now the last bad guy standing. I agree with Bill thinking she is the only one being held accountable while greasers Frank and Teresa are held harmless. Frank comes back to the table and gives them the details that Bill has taken it as a personal attack on his wife. He does recognize that most men would defend their wives.

Louie, who always comes in hot and sweaty and smacking on his gum, joins the group. Teresa calls within moments of Louie sitting down. Does she feel the need to monitor the electronic leash that is attached to him? Joe G. tells Louie what happened with Bill. He also whines about them staying over after they were tossed from Bill and Jen’s house. Louie then kind of apologizes for sleeping with the enemy.

Joe G. and Tiki want to ask about all the rumors about his past. They want clarification on the allegations that have been made on social media. Louie is willing to address the rumor about him allegedly smacking his girlfriend around in front of her children, and he whips out his rehearsed speech. He first denies the allegation and then decides to bash her by saying she pulled a knife on her ex-husband and tried to stab him. Louie chose to give her the benefit of the doubt. Tiki wants to clarify that there was no physical violence since all the women have heard this story. Louie claims most of his exes are very thirsty for attention and these stories have no merit. He sounds like a total douche-nozzle when he refers to grown a*s women as girls.

Louie thinks he stayed in that relationship since he was not strong. He also chose to still propose to her even though she allegedly tried to stab someone. Louie, who is a total buffoon, thinks Teresa is his perfect match, and I must agree on that one. Teresa, if she still had any brain cells left, would have listened and appropriately paid attention to all the red flags that were shoved in her face. Joe G. tries to play like he is the big bad brother and will seek him out if he does not treat his sister right. He obviously is going to keep quiet on his true feelings for this guy.

The next morning, the very hungover husbands are getting grilled by their wives on the men’s night. Joe is concerned that Louie is going to be his brother-in-law. Melissa is worried that Teresa will be blowing up her phone since they asked Louie questions. Teresa is now getting the story from Louie, and she resents Traci and Tiki getting involved in trying to pop her love bubble. Evan and Jackie think that Jennifer is the real disaster and Bill is not a bad guy. They can all agree that Louie has defended his past by blaming the victim and that does not sit well with any of them.  Side note: When did Jackie take off Evan’s muzzle and allow him to speak with her rehearsed script? Evan kept his mouth shut last season when his affair rumor was front and center, and he chose now to come for Jennifer when she is spiraling?

Jennifer and Bill decide to chat about the disastrous guys’ night. She is thankful that Bill stood up for her in front of the guys. Jennifer thinks his silence speaks volumes when they have been around the entire group. She admits that the affair still troubles her, and the fact that Bill shows no emotion makes her feel isolated.

Dolores can now finally evict her adult children from her townhouse since the reno project is done. She is really concerned about losing her mom. David has been a huge help and has been advising them on Valerie’s condition. Dolores is willing to put her feelings about David aside since he is doing so much for her mom.

Marge calls Dolores to check on Valerie’s status. Dolores shares how Frankie Jr. was rubbing his grandma’s feet and doting on her. Marge wants to invite Dolores to a spa day to take some time for herself. She does not want to invite Jennifer since she defeats the whole purpose of stress relief.

Teresa, in her messy bathroom, tells Gabriella and Gia that she and Louie are celebrating their one-year anniversary. Gia admits she was skeptical about Louie. Teresa tells her girls that she is so fortunate to have a man who accepts her past and the fact she went to prison. She refers to herself as smart since she scored this greasy prize of a man. Gia assures her mom that it’s not like she is a psychopath but more of a delusional fool. Teresa thinks her parents sent her Louie when she prayed for a good man. Gabriella, who is my favorite, looks genuinely perplexed about how Tre birthed her.

Melissa and Antonia discuss her sweet 16 party. She was never able to have that celebration since her dad had a fatal accident. Antonia is unhappy that she was moved to a different school in the middle of high school. She is not able to cheer anymore since she tore her ACL and wants to give it up. Melissa is upset that she is giving up something she is good at. She is dealing with a surly teenager and obviously using Antonia this season as a storyline.

Teresa is now going on her anniversary date with Louie. He has planned a boat trip and has a sax player. Teresa thinks that Louie really listens to her since he remembered she used to play the sax.

Louie whips out this long a*s scroll full of random lines from Brooks Ayers Hallmark cards. He even claims to like her nails on a chalkboard voice. Louie is spoon-feeding this fool all this nonsense, and Teresa is gobbling it up. Excuse me, Tre is authentic and bashful? Has he watched her on this show at all? Louie calls Tre his soulmate, and he wants to spend the rest of his life with her if she does not increase the number of brain cells she barely functions on.

Melissa, Traci, Jackie, Teresa, and Dolores show up for Marge’s spa day. Teresa shares with the other ladies what Louie did for their anniversary. Marge hilariously thinks that “delusional” should have been on that scroll. Teresa resents Traci commenting on Bill and Jennifer’s marriage. She thinks the newbie needs to take a seat. Dolores shares that her mom cannot be left alone since she is in danger of a heart attack. She won’t admit that dealing with all of this is making her miss David. Dolores is a tough woman and will not allow them to see her crack.

Melissa tells the other ladies what is going on with Antonia and her injury. She thinks she is depressed and has checked out. Melissa mentions going to Boca Raton High School and being bullied for looking like a Jersey girl. I know this high school, and she must have been like a fish out of water there.

Dolores shares with the ladies that Jennifer had buried this affair and the wound has been reopened. She tells them that Jennifer is not doing well and could really use their support. Teresa is the only one who is willing to do that.

Jennifer and her brother Steven get together since she is aware that she is being iced out. She asks Steven what is happening with his love life. I really enjoy watching their relationship since it seems genuine and loving. Jennifer tells Steven about their mom’s reaction to Bill’s affair. Steven then asks Jen about her wellbeing. Jennifer shares that they don’t talk about the affair — almost like it never happened. She would like to go to therapy with Bill, but she is fearful that if they open Pandora’s box, it cannot be closed. Jennifer is afraid she is going to end up like her mom, who is miserable with her dad. She looks vulnerable in this scene when she recognizes things will most likely never be the same again. Jennifer, in her ITM, is questioning her marriage and staying together.

We then get a midseason trailer where the drama continues! Teresa and Marge continue to go at it, and it appears to get very contentious. Jennifer’s wounds are now on full display, and she is being forced to deal with something she tried to bury 10 years ago and Marge dug up. See you all next week in NJ, and have a happy hump day!