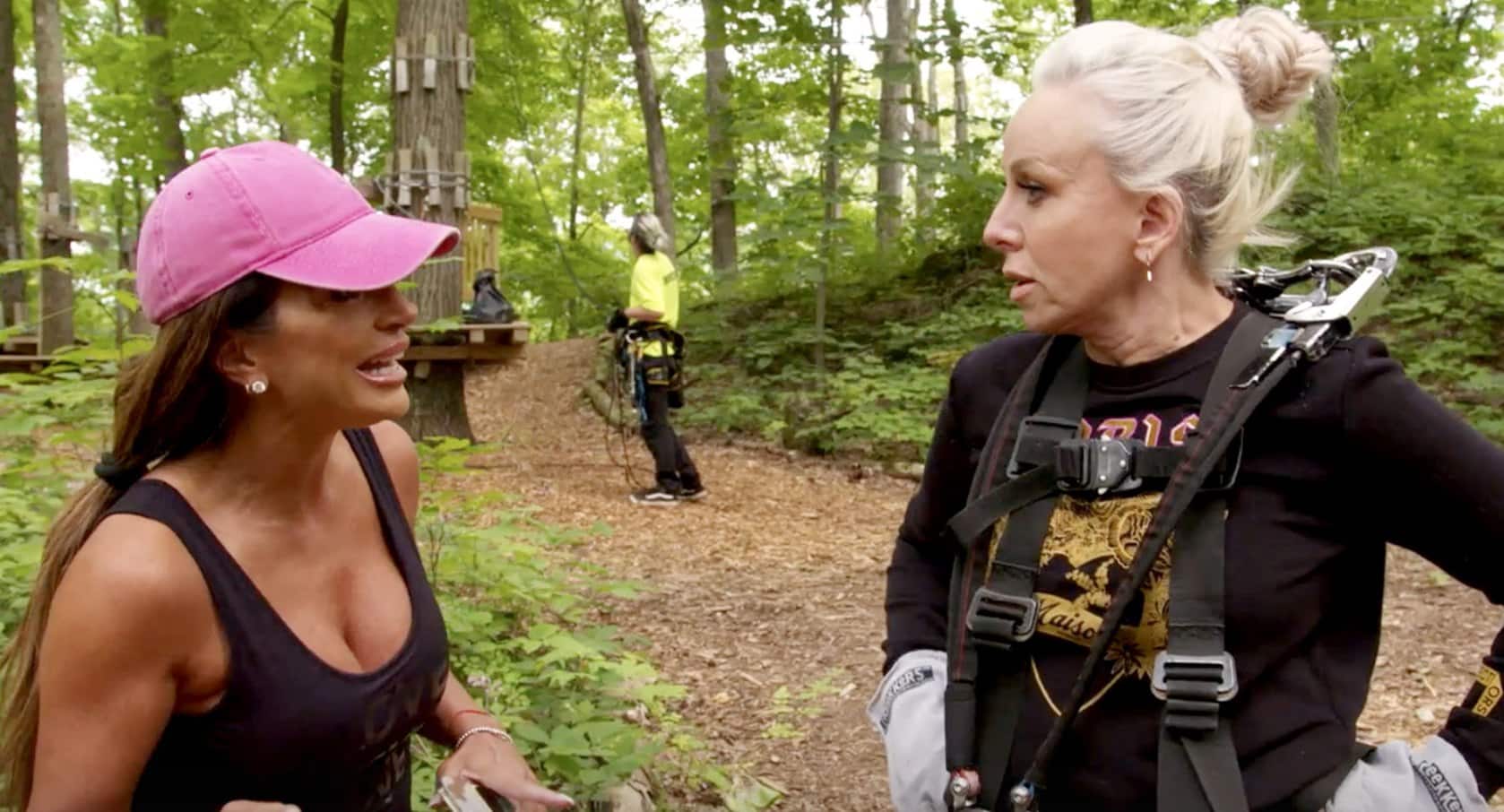 This week on the Real Housewives of New Jersey, the episode is aptly titled “Forest of Fury.” Teresa and Marge are literally on a collision course to determine who is the real dictator on this show. Who will prevail between the pudden-head OG or liquifying Marge? Let’s watch the playground battles begin, shall we?

Jennifer, who is visibly nervous, gets a call from Bill, who informs her he is not coming home for dinner. She informs Bill that she is meeting up with Margaret to find some resolution. Jennifer is expecting Margaret to own her part in opening wounds that honestly have never healed. Marge and Joe B. discuss this meeting, and there is an absurd expectation that there might be some accountability at this meeting. They both have high expectations of each other, but they might want to lower the bar since these two strong personalities might not be able to have a ‘come to Jesus’ moment.

Jennifer looks relieved because someone will film with her when Marge shows up for coffee. She feels that Marge exposed a secret that has affected her children. Jennifer is devasted that she is forced to deal with this infidelity again and feels Marge issued the gut punch. Marge holds Jen’s hands and tries to tell her how sorry she is that she is so hurt. She assumed that Jen’s family was informed about this.

Jennifer regrets that she has been so cool about the affair for 10 years. She is terrified of therapy and to find out if there may have been other women. Jennifer tried to be perfect and treat Bill like gold, but she was devasted when it was not good enough to keep him happy at home.

Jennifer is incredibly hurt that Bill has not stepped up to the plate and defended her. She claims that this lack of defense has hurt her more than the affair did. Jennifer wants Bill to fight for her and her marriage, and she is angry he has not done that. Marge defends Bill by saying he is a good man and father.

Jennifer, who truly looks broken down, needs all the friends she can get now. Marge is sorry that she cut Jen to the core, and she does regret it. Jen admits that Marge did not cause the affair and she has hit below the belt with her comments to her and Marge Sr. She also wants to make amends with Melissa, but she thinks that Jackie is misdirecting her anger. Jen kind of suggests that Teresa was also calling around about the Evan rumor and no one is calling her out. She is the reason that Teresa is not being called out since she believes that Teresa is her friend and has been protecting her ticket to fame.

Jennifer is now backpedaling and not willing to admit that she was asking around for Teresa. She refuses to talk to Teresa about Louie’s red flags. Jennifer will only agree that Louie may have been a little assertive. Teresa believes people are just coming at her because of who she is. She really needs to stop looking at it like that since this shady fool is now getting himself involved in civil litigation. Teresa just wants to stick her blockhead in the sand then whine in that horrifically nasally voice about how no one ever warned her about her beloved love bomber Louie.

Dolores and Frank are shopping for Valerie, who is still at the hospital. Valerie’s procedure went well, but her eating habits really need to be changed. But all she wants to do is eat carrot cake. Frank tells Dolores that David is heartbroken over their breakup. He knows Dolores is a serial monogamist and won’t be banging hookers like he did to get David out of her system.

Jackie and Evan talk about her medical results from Renfrew. They recommended that she go for intense in-patient treatment. Evan wants her to follow through with it. Jackie is not willing to do what they recommend because she claims that it will take time away from her family. She worries about the time away from her family, but her health is far more important right now.

Melissa and Joe G. talk about Antonia and how she is upset over not being able to cheer. She wants to push her to be her best. Melissa wants Antonia to deal with this setback just like she did when her dad died. She tells Joe that she is going on the team-building exercise. Joe thinks Jennifer has been getting karma for all her bad behavior. Karma is about accepting there are consequences for our actions and learning from them on our path to enlightenment. These shows are not about acceptance and enlightenment!

Jennifer shares with Bill the details of the conversation with Marge. She mentions how they never dealt with how painful the affair was for her. Jennifer confronts Bill on why he did not defend her at the BBQ. She wants Bill to stop being so passive. Bill does not forgive them for discussing the rumor. He does not want to be around the group anymore and really seems checked out.

Marge, who looks like she forgot to put her face on, visits Jackie to talk smack about the other ladies. Jackie shares how she cannot commit to anything that requires a huge commitment when she mentions Renfrew’s recommendations. Marge wants her to take this seriously, but she remembers when she spoke up last time and how it did not go well. She tells Jackie what went down with her meeting with Jen. Jackie cannot get over Jennifer digging for dirt after everything that had happened. She cannot believe that she would do that after she had the most to dig up.

Teresa and Jennifer go over to Dolores’ house, and they discuss who is going to care for Valerie. David has offered to care for Valerie. He was by her side when she went under anesthesia. David sounds like he is really a great friend and doctor, but I could never see Dolores as a candidate for a doctor’s wife. She should just appreciate that he stepped up to the plate for her family and just let it go since they were never meant to be a couple. Jennifer shares with them what went down with Margaret and how they were able to talk through their differences.

Teresa is going to make Traci answer some questions about how her relationship started with Tiki if she keeps coming for her Louie. She does not think Louie has to prove himself to anyone and especially not Traci. Teresa is going to stick up for her boyfriend and no one is going to challenge her over him. She is on a collision course with this guy and no roadblocks are going to stop her from ruining her life. Teresa at least got four kids out of Joe Giudice, but this snake oil salesman is going to cause even more damage.

We have now arrived at the team-building exercise that allegedly helps to build trust since you must rely on your partner while blindfolded. Melissa is concerned about who they will all be partnered with. Traci has picked the teams with productions influence so this will be interesting. Marge shares what was discussed with Jennifer. Marge apparently called Tenafly to find out about Jennifer’s call. She found out that Teresa was the puppetmaster and stuck her hand up Jen’s a*s to control her. Dolores warns the ladies that Teresa is coming in hot, and they better gird their loins.

Melissa pulls Jennifer aside to talk through their differences. She feels bad that she is hurting and wants their storyline to have some resolution so they can film together again. Teresa comes bearing gifts from her workout line. She is not in a good mood and hopes she is not paired with anyone who pisses her off since she will throw them down.

Traci, of course, wants to partner with Teresa. She might as well do it blindly since Teresa wants to throw her down for trying to burst her love bubble. Teresa is a walking misery, and she has a huge bug up her a*s. She refuses to partner with Traci since Tiki talked about Louie. Teresa is just talking smack about the whole event and is basically heckling the rest of the group. Melissa offers to guide Traci since Teresa is literally throwing a temper tantrum.

Dolores is doing a great job being guided by Jackie so at least someone is taking this exercise seriously. The ladies are all pairing up to talk about each other, and Marge is peeved that Teresa has done all the digging and left Jennifer out to dry. Jennifer pretends that she likes Teresa’s company and is willing to accept that she does not go to bat for her. She bizarrely says that Teresa gives her comfort since they share the same old-school values and more importantly job security. Jackie accurately sees Teresa as a dictator in her friendships.

Teresa is almost like a UFC fighter who is prepping to jump into the ring. She is circling and hears Dolores and Jackie talking about Jennifer. Teresa then decides to pick this time to go after Marge and Traci. She tells Marge she looks like sh*t, and Marge tells her she looked like sh*t all last year. Teresa then jumps into the ring, and we get a to-be-continued!

Next week, we will see the conclusion on who will prevail and be the true Jersey warrior! I will see you Blurbers next week for the big attraction!