Home Real Housewives of New Jersey News RHONJ Recap: Teresa Body Shames Margaret During Another Confrontation and Melissa is Caught in the Middle of Their Feud

RHONJ Recap: Teresa Body Shames Margaret During Another Confrontation and Melissa is Caught in the Middle of Their Feud 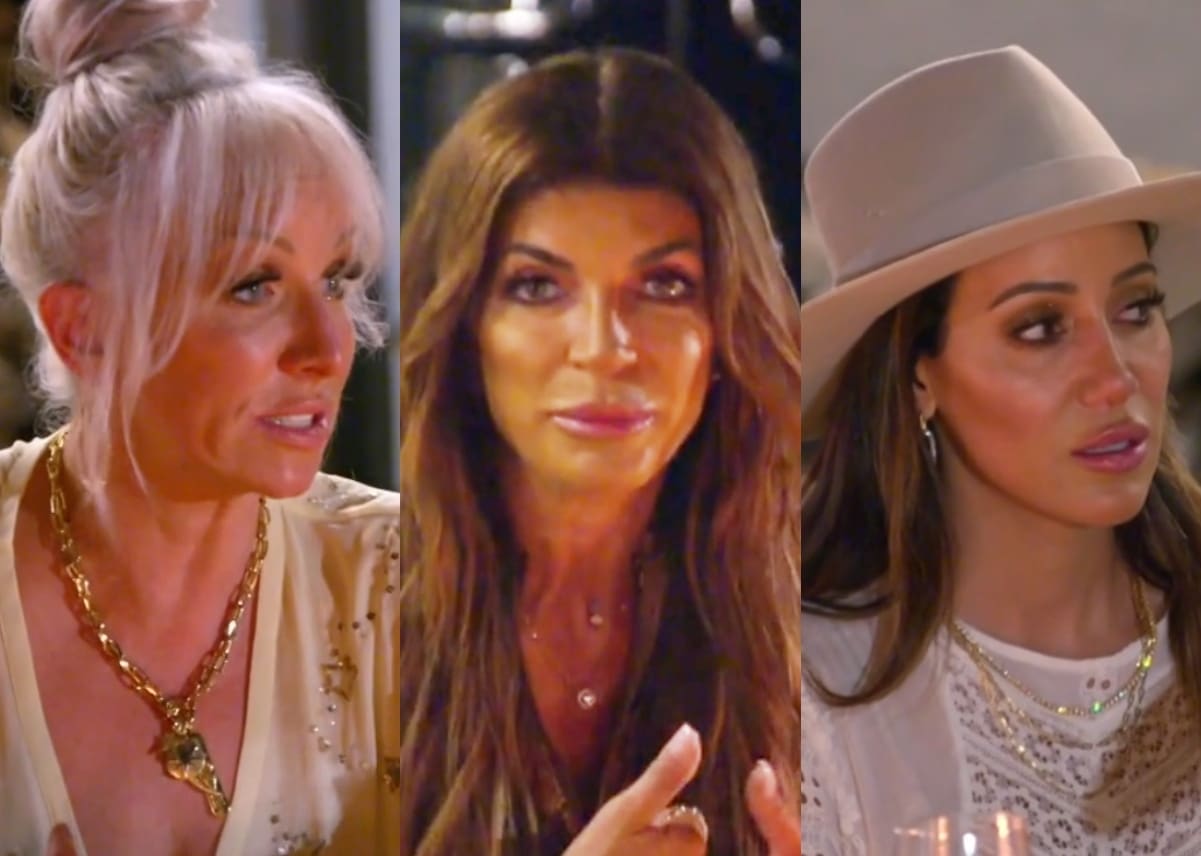 We are back this week to join our Real Housewives of New Jersey as they play a game of Survivor. Who will be able to outwit (M), outplay (M), and outlast (T) each other between Tre and Marge and be the true Jersey queen? Let the games begin!

Dolores admits to Frank that she had problems sleeping the previous night since everything was out of control. She concludes that Margaret has been way too involved in what Louie represents to Teresa. Frank, who just slept with a bunch of stuffed animals rammed into all kinds of inappropriate places, thinks that Margaret is just being inquisitive. Margaret and Joe B. are discussing how disgusted she is with Teresa clearing a table on top of her and then threatening to kick her a*s. She cannot see Teresa as anything other than being psychotic.

Jennifer finds it hypocritical that Marge felt pushed by her, which forced her to reveal Bill’s affair. She thinks Marge is doing that same thing by pushing Teresa so far that she acted like a total barbarian at a restaurant. Bill is worried that Tre is not namaste anymore and wondering how he can distance himself from the characters of this show. Melissa thinks that Teresa is “fustrated” since she cannot be in control of the narrative and of the other housewives and get them to willingly accept Louie’s subterfuge.

Dolores and Frank make breakfast for the Jersey crew. Marge gleefully took Teresa’s room and hopefully her HBIC title since she hit the road the previous night. She thinks the attack was unprovoked, but I am sure that Teresa does not see it that way. Jennifer recognizes that Teresa went too far this time when she threw the plates and glasses like a toddler during a tantrum.

Dolores, who is in her own little solitary love-less bubble, has planned a genuinely nice, beautiful dinner complete with authentic barbecue. She is concerned that the BBQ is not the only thing that will be coming in hot to dinner. Margaret cannot believe that you cannot ask Tre questions without her losing her sh*t. She finds it bizarre that the family finds this behavior to be acceptable. Marge refuses to dance around the crazy person and will not tiptoe around the Tre-lips.

Joe just wants Teresa to be happy, and if it means keeping his yapper shut, he will do it. He will have to follow the Caroline Manzo creed that certain Jersey families are thick as thieves and will protect each other until the end. Dolores compares Teresa to a battered dog who has experienced a first moment of kindness. She thinks Teresa has been treated so poorly that the fact that Louie is kind to her alleviates any concerns that she may have. Marge wants a major apology from Teresa, and she better not be holding her breath for that one. Joe G. assures everyone that he will grab his sister if she acts up again and show her the door.

Dolores calls Teresa and makes plans with her so they can talk out what happened the previous night. They agree to go shopping and she is hopeful that she can diffuse the situation. The rest of the ladies are heading to a recording studio. Melissa, who is still in her own little oblivious bubble, cannot figure out if they are in the west or the south. Side note: Did you all see the WWHL where Melissa could barely answer one question on geography and claims to have a degree in elementary education? Jackie looks like she is addressing her eating disorder and looks much healthier.

Jackie, Marge, Jennifer, Melissa, and Traci arrive at the recording studio and need some liquid courage to be able to sing. They have professional songwriters at their disposal, and they are asking for some guidance on the lyrics. Melissa cannot wait to show off what she believes to be good singing skills. They decide to call their song “Lady Drama.” They poke fun at their fake lips and fake t*ts. Jackie is so happy that they have not had a fight in hours. Melissa just wants a chance to belt out her part of the song, but Marge prefers that they are autotuned. Side note: Why do we have two franchises that think we want to hear a soundtrack of their distorted warbling?

Frank has planned a fun trip for the guys on a pontoon, which is decked out with a bar and a slide. He knows how to have some fun. Joe cuts off the penis from the strap-on he bought and gives Frank some balls since he believes he is ball-less. They are doing shots out of the penis, but Dr. Bill wisely will only drink his shots out of the bottle of Tito’s. I do enjoy the guys’ juvenile antics and how they do not let the previous night ruin their trip. Louie arrives, and it looks like Teresa’s makeup has rubbed off on him and probably made their hotel room sheets look like they had incontinence issues. He admits that Teresa was a little scary last night, but he thinks the ladies are not giving him a fair shot either. Louie sees Tre’s rage as showing him love and protection, and you have to question his perception of things.

Dolores and Teresa go shopping at a boot store. She is happy to get out of the singing crap, but she knows she is fighting a losing battle trying to tame this beast. Teresa compares herself to a bear who has been poked and is now biting back. Dolores wants her to learn to control her rage. She wants her to behave like a lady, but Tre will only apologize to the group. Teresa expects an apology from Marge for dragging Louie through the mud. Never-going-to-happen…

Tiki is enjoying his quiet time back at the house since he had to legitimately work. He then gets recruited to make the ladies a pot of coffee. The other guys come back belching and obviously inebriated. Bill has his shirt on backward and his hair looks like he is a mad scientist. Frank stumbles around and passes out upstairs. Dolores goes to check on him and wants to know why he had a cock and balls in his mouth. Frank blames that on Joe G. since they were behaving like their little frat boy selves. Joe shares with Melissa what Louie said about Teresa. Louie sees Teresa’s outrage as just being protective.

The table setting looks impressive for their BBQ. IMO, Bill and Jen win best dressed in their matching outfits. Melissa at least has a rocking body going for her but not much upstairs, and she looks cute with her white dress with boots. Marge thinks her gown has earned her a spot at the CMAs — in 1980. LOL. Dr. Bill is sleeping in a chair and looks like a cowboy who has just spent the day at a saloon. He hilariously sidles up to the bar and requests a drink fit for someone who has been overserved. Evan is ready to continue the party and drink till he is oblivious to what he has signed up for.

Teresa arrives in a snakeskin bodysuit with white boots, and let me just say, it is not very flattering. Maybe she is dressing like a metaphor — but wait, she is not bright enough to come up with that! Louie looks like he did not get the memo on the theme of the night and arrives wearing a glittery skull shirt. Teresa already is eyeing Marge and wants to throw another drink on Marge’s outfit. She obviously has not learned anything since she got kicked out of the house for her bad behavior — allegedly. Dolores has hired an adorable guy to teach this crew line dancing. They all try to line dance, but there is little rhythm among this group — especially with the Gorga siblings, who cannot follow instructions.

While at the beautifully set dinner table, Teresa apologizes to the group but claims she was provoked. Marge sees this as a non-apology and is mumbling about how anyone can find this drivel to be acceptable. Tre then demands that Melissa tell Marge to shut the f*ck up. She also threatens her brother if he does not show her loyalty — she is done with him too. Melissa tells Marge that this non-apology is the best apology that she is ever going to get out of her sister-in-law. Teresa is now shaming Marge again over never missing a meal. She really needs to stop this crap since she is trying to market her line of clothing and body-shaming women is not the best approach. Jackie, who clearly is provoked by any mention of weight and eating, does not like how Teresa treats her friends. The night ends up again with no resolution, and it pisses me off because it is a waste of good BBQ!

Next week, on the season finale, Marge and Teresa are back in the UFC ring housewives-style, and no one is ready to tap out. Louie again gets confronted on his past and storms out Teresa-style. I hope everyone had a good holiday weekend, and see you next week for the finale!