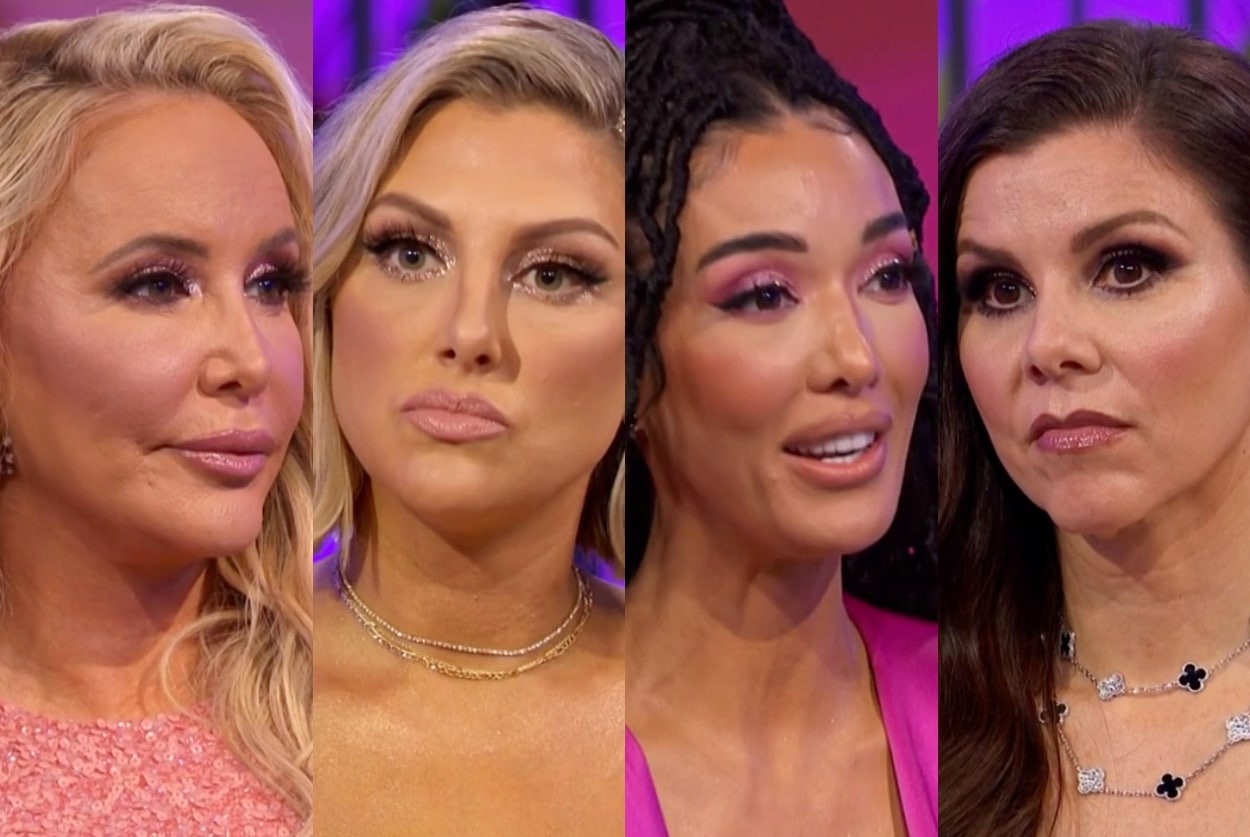 The Real Housewives of Orange County reunion wraps up, but not before insults get slung and old issues get brought back up. At the end of the day, *most* of the ladies hope to mend relationships and have positive things to say about each other… it just takes a long time to get there.

Picking up right where part one left off, the Gina and Shannon saga continues. Shannon believes that she has gone above and beyond for Gina time and time again, and she is hurt that Gina asked if Shannon had any friends. Shannon calls Gina “mean spirited,” and Gina turns it, saying John, Shannon’s boyfriend, is mean spirited by saying “f*ck her” about Gina. Gina attempts to clarify the friend thing once and for all, and Shannon believes that despite their past issues, the ladies can get along and have fun. Shannon has also apologized on behalf of John, and so, Andy is able to “put a pin in it” (phrase used properly as opposed to Shannon’s usage) so we can move on.

It’s time for Noella vs. everybody… well, except for Shannon, since Shannon has been team Noella from the start. Jen gets the floor first to try and explain the drama. Noella believes that Jen was a sh*t stirrer, and Jen states that Noella just makes things up. Noella was also irked because Jen tagged her in a post about her med spa where she thanked her patients, but Noella never went to the spa. Petty stuff.

Heather makes it clear she does not hate Noella but does not back down from calling Noella out. As Heather repeatedly calls Noella a liar, Noella cries out, “don’t make me say it.” Noella finally blurts out a scoop about Nicole’s lawsuit. Apparently, Nicole’s surgery was botched, courtesy of Terry, and a large lump of money was paid to Nicole. Heather claims that she would have remembered writing a check if she actually GOT SUED. The Nicole case was dropped a long time ago, which would explain why Heather would attempt a friendship with Nicole in the first place.

Noella continues to state that Heather pushed people against walls, which never happened. To be clear, Noella first stated she saw this happen with her own eyes and then changed her story to say someone TOLD her it happened. Insert eye roll here… The “pornographic” card game Noella gave to Heather’s daughter is the next hot button issue. Noella is annoyed that Heather essentially called her a “sexual predator” and tries to move past it.

Emily gets called out for pushing Noella too far, but Emily is not apologetic. She explains that Noella interrupting to talk about her own divorce while Jen was spilling her guts about her marital issues was just too much. Emily had to put an end to it, and although it may have come across as abrupt, in Emily’s eyes, someone had to cut Noella off.

Gina explains that she jumped in too fast and too hard with Noella. Noella becomes emotional telling the women that it was a sisterhood for her as she leaned into the new friendships. When asked what she would change if she got the chance to redo the season, Noella states that she would not have done the show if it meant she would have to share her situation with the world again.

A lighter topic gets brought up: the work the ladies have had done. Shannon shares that she had a facelift five weeks ago, and Gina’s done cool sculpting. Heather had a colonoscopy to look thin, and Emily just works out the old-fashioned way. Imagine?!

Andy calls out Shannon for embracing her new life and this new chapter. Shannon reminds the viewers that there is life beyond and that you don’t have to accept your life if you are unhappy. Heather, who has known Shannon the longest, applauds her for picking herself back up. Shannon is proud of her daughters but continues to feel guilty about her failed marriage. She is hopeful that all her kids will get to a positive place and is in zero rush to get remarried. Everything is better (wink, wink) in Shannon’s life these days thanks to John. Therefore, she has no interest in a threesome or a hall pass.

After rewatching the Jen segments, it is 100% clear that Ryne loves Mr. Puppers way more than he loves Jen. The relationship between the duo is a bit fishy, especially as she tries to explain Ryne’s newest business venture. Heather jumps in to clarify that Ryne was very personable when she spoke to him about a vacation rental, and they all agree that he seems to clam up around the cameras. I’ll say!

Jen spills about the seven engagements but explains that it was love at first sight with Ryne. The issue is that they started as a light and breezy relationship, but when kids were added to the mix, things got heavy. Even though Ryne moved out for a short amount of time, Jen is hopeful that things could turn around for the couple.

The topic turns to the Vermont trip. Noella’s claim about deserving the biggest room since her dad died gets thrown back out, but Noella is not embarrassed about it even now. Room fights have always been a BIG issue with housewives.

Noella believes that Heather was so controlling of friendships that no one could be friends with her. But it’s awfully funny how, after the cameras went down, Noella wanted to start over with Heather. Andy brings up Heather calling Noella’s karma out, and Heather repeats that she feels horrible for everything Noella has gone through, but she was brought to a fighting position thanks to Noella.

Who would ever think that Shannon would be the peacekeeper here? She reminds the group that Noella’s dad had passed away only four days earlier, and Gina’s “sh*t happens” comment was distasteful. Noella explains that she really only had a relationship with her dad when she began modeling. Jen jumps in and lets Noella know that she was upset to hear about the passing of Noella’s father, especially because she lost her dad and it still stings.

Let’s start a petition to stop housewife songs in all franchises, shall we? Apparently, Richard Marx was happy with the way the song that he composed turned out, and the women claim they owned the cheesiness and just had fun with it.

Andy wants to end the reunion on a positive note and asks the ladies to say one positive thing about someone else in the group. Emily starts and compliments Heather — she was flattered to have someone take a true interest in her life and her family. Heather goes next and tells Noella, “If we were to meet again” (seems like Heather is banking on Noella being a one-season and done kinda gal) she has hopes that she can get to know Noella and vice versa. Noella repeats that this group is like a sisterhood, and she respects Jen for going through all the hardships and pain that she has withstood. Jen appreciates Noella’s words, but she tells her, “If drama was a drug, you’d be a pharmacy.” LOL.

Shannon tells Gina she is very proud of her and is excited about her new business venture. Gina sends it right back to Shannon and calls her “resilient” and teases her about her button-pushing. Heather and Jen compliment Emily for being an articulate mother, and all seems well in the OC. Heather leads the pineapple toast and proudly states whilst holding her pineapple high, “stand tall, wear a crown, be sweet.” Cheers to sweet 16.

TELL US – THOUGHTS ON PART 2 OF THE RHOC REUNION?