RHONJ Reunion Part 2 Recap: Andy Cohen Loses It, Plus Teresa Apologizes to Joe and Tells Margaret to Shut the F**k Up as Jennifer Brings Props

We are back with the Real Housewives of New Jersey to subject ourselves to part two of the reunion! How will Andy the Circus Ringmaster tame the wooly mammoth Teresa this week and get some control back? Grab your libations or whatever suits your fancy, and let’s watch this Jersey toilet overflow, shall we?

Melissa is still trying to crack into Teresa’s damaged frontal lobe and convince her that Joe Gorga is sick of being put down. While backstage, Joe G. tells Louie that he is sick of Tre humiliating him, and you can almost see Louie’s greased wheels in his head working overtime trying to process what he is marrying. Joe is done with Teresa calling him a b*tch boy and p*ssy.

Andy tries to tell Teresa, who almost has spittle spooling out of her inflated lips, to apologize to her brother because she is demeaning to him. Teresa then springs from her seat and waddles like a Weeble backstage to pretend that she behaves like a loving sister. Joe tells Teresa that Louie is going to have to face this when he goes out, and if he cannot manage it, he needs to stay backstage. Side note: I have three brothers and two sisters, and nothing would make me humiliate them like that on TV — EVEN if they had hurt me behind the scenes. Just saying. 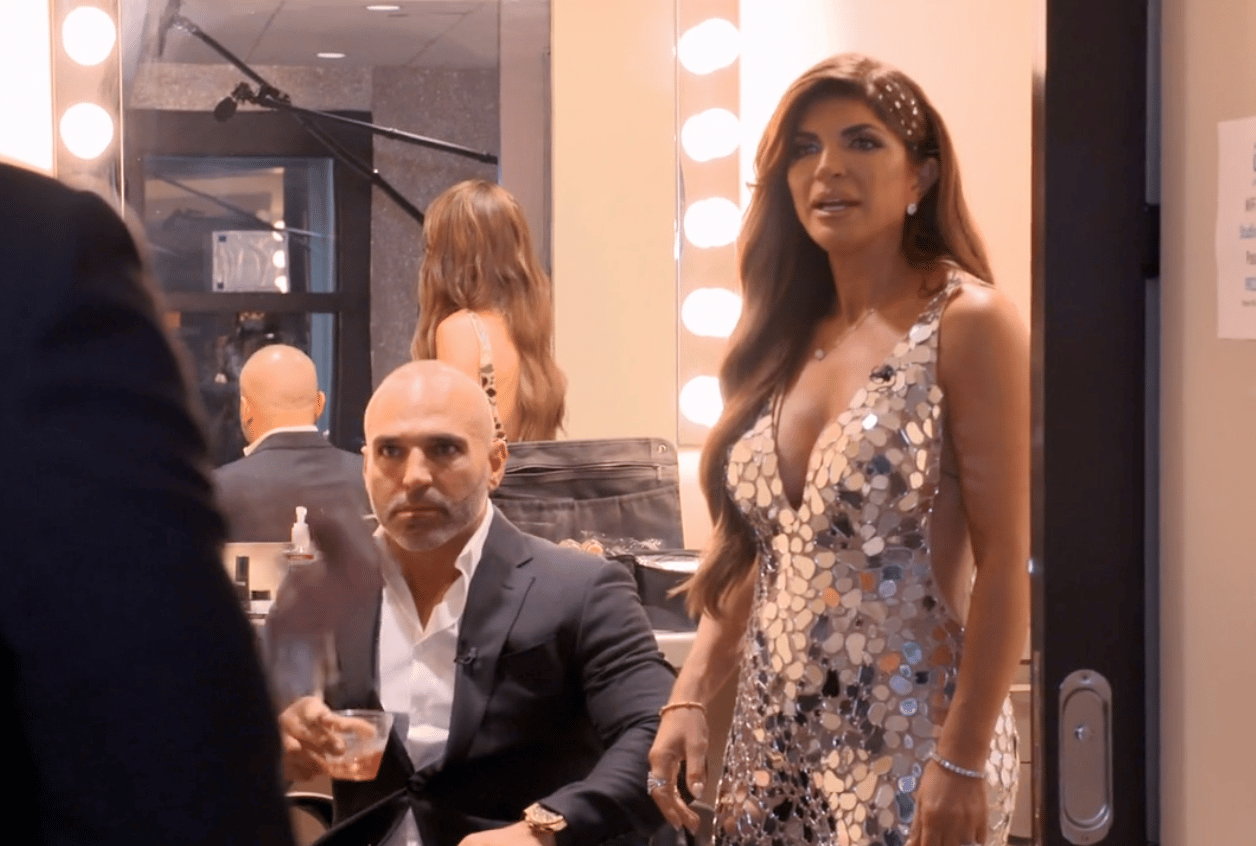 The other ladies take their final chance to talk directly to Jennifer and convince her to join the “We hate Teresa club.” They tell Jennifer that when Teresa is not there, she is a different person with some soft moments, and there is an opportunity to have a friendship with her. Jackie cannot understand why Jennifer would shift and investigate Evan when her own husband was messing around.

Margaret thinks Teresa is a dictator in her relationships. Jennifer acts like Teresa is a saint in her eyes and should be canonized. Marge also believes that the show can survive without Tre and some would not agree. Teresa thinks she is the Jersey queen, but not in my housewives’ book. The queen of all housewives, LVP, knows when it is time to go and not deal with this nonsense. Tre is no queen even though she fancies herself as one, and she is not in the same category as LVP — EVER. Sorry, I had to digress since I have never gotten over LVP being chased off by the coven.

Louie looks stunned by his future bride of Frankenstein coming across like a deranged lunatic. Andy, who tries to be the voice of reason and Teresa’s boss, tells her all they want for their family is a resolution after being on the show for 11 years. Well, Andy lost me at that comment since you know he loves this family discord. Teresa gives Joe a halfhearted hug and reluctantly tells him, “I am sorry.” She tells Louie that she is not trying to hurt Joe’s feelings. Louie can clearly see what Teresa is saying to her brother is triggering him, and he wisely tells her to stop it or he will be forced to send her to camp so she can be reprogrammed!

Dolores, who is in constant renovation in every sense of the word, calls her Irishman, Paulie, and Andy chats with him on the phone. She shares that Frank is shacking up with David in the house that she designed. Andy wonders if Frank is a glorified couch surfer without any income, and Dolores denies that he is broke disbarred lawyer. Dolores admits that Paulie and Frank do not see each other often. David is dating one of Louie’s exes, who he ghosted after meeting Teresa, and THAT was glossed over quickly. I am so happy to see Dolores recognize that she deserves more than she has settled for.

Teresa loves hearing that Rihanna gave a shout-out to her for her parenting. Frank Catania’s inappropriate behavior is discussed with his children. Andy asks Melissa why she put the boys’ sports over Antonia’s school. Great question, but she pretends that all is well in the Gorga household, and Antonia still hates her. Margaret gets asked about her kids and the therapy comment to Jennifer. She admits she got slammed over that insensitive comment.

Andy asks Teresa if Gia was skeptical about Louie, and Tre denies it. Production rolls the tape where Gia clearly sees this player for who he is. Andy tries to tell Teresa he was hearing this stuff about Louie long before filming even started. Teresa is convinced that Margaret has put out all that tabloid nonsense. She thinks these women are coming after Louie because he is dating Teresa Giudice, and she correctly sees herself as the evil queen by saying, “Who is the fairest of them all with the mirrored pants?” Teresa thinks if he were dating Marge, this would not be happening. Margaret looks at Teresa with disgust and calls her pompous. Andy says, “This is more exhausting than normal.” Now that is an understatement!

Jackie discusses how sharing her eating disorder was challenging, and she has gained weight and looks much healthier. She thought telling her truth would help remove some of the shame associated with having this disorder. Melissa noticed that Jackie used to say she ate before she came out with them, and Jackie admits she would allow herself only two meals out. She admits it was embarrassing to share this, but she does not want to go back to her previous self. Andy asks Jackie about Teresa fat-shaming Margaret, and she is disgusted by that comment. Jennifer, aka the sycophant, must of course jump in and defend her friend. Teresa apologizes to Marge if she took it that way, which is a bullsh*t apology.

Thank God Andy takes a break since Teresa cannot stop saying, “Shut the f*ck up!” to Marge in her guttural snarl. Teresa then loses any credibility that she still might have when she denies being stupid. I agree she is not just stupid — she is a woodenheaded simpleton that has hair that is eating through her forehead.

Andy mentions the discord between Jennifer and Marge, who shared the affair story about Bill. He asks Jennifer if Bill was mad this was brought to life. Bill was embarrassed and feels he was guilty as charged. Jennifer has forgiven Bill for what he did. Margaret tells Jennifer that Bill’s affair was common knowledge. Jennifer thinks her kids are following her example by forgiving Bill. Teresa thinks infidelity is the end of a marriage??? Did she not see the episode where Joe was calling her his c*nt wife while talking to his mistress ON CAMERA, and she remained married to her Juicy Joe for several years???

Andy asks Jennifer why she was calling Melissa fake and the Gorgas crooked. He thinks this is like an episode of Ted Talk on Instagram when Jen whips out her posterboard. Jennifer and Melissa had a social media war over Jen’s plastic surgery post, and she felt attacked. She decides to retaliate since they were not sympathetic to her elective surgery and called the Gorgas crooked.

Andy then asks Margaret a viewer question about how cheating on your spouse and getting cheated on are two vastly different things. Margaret believes that Jennifer blames women for men’s behavior. Jennifer is disgusted about how Margaret would talk about Joe B. having to wash her foul stench off his body before he returned home to his wife. I am sorry, but hearing that again makes me want to blow chunks. Jennifer is asked about living in her glasshouse, thinking she can escape her past and it not being brought up on reality TV.

Margaret gets called out on the comments about Jennifer’s sister-in-law being a mail-order bride. The lip liner comment about Jen’s lips looking like a monkey’s a*shole is mentioned again. I happened to think that was one of the funniest comments Marge made and really could apply to several of this crew. Marge thinks it was wrong of Jennifer to try to get Bill’s side piece fired, but Melissa even thinks Jennifer was justified in doing that. Jennifer asserts that Marge talks to Joe B. in a degrading way, and I must agree with her on that one. The screaming gets out of control between these two shrews and Andy must scream out, “Shut up!” I think Mr. Cohen is getting his panties in a wad at this reunion, but he created this monster franchise, so he better learn to deal with it!

Next week, the guys join the group, and Louie’s past is brought up for HIM to finally answer these questions. Well, this episode was a lot, so I hope you are all well sedated with whatever you partake in to get you through the day! Take care, everyone, and see you in Atlanta on Sunday!