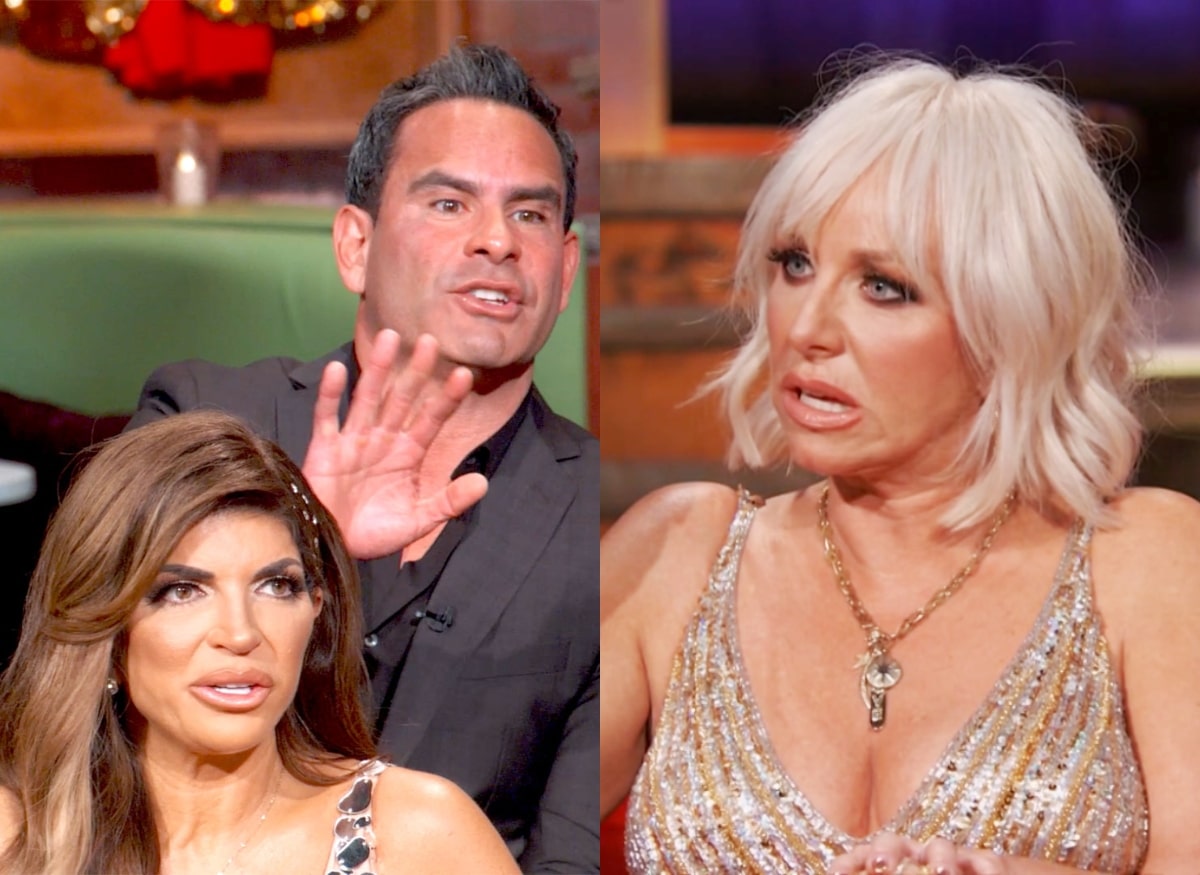 Let us watch the final episode after Tre-Kong was unleashed on the other cast members of the Real Housewives of New Jersey. Will everyone survive the rampage and be able to be on the next season of RHONJ? Let us watch and see, shall we?

Andy Cohen, who has had enough of these vicious shrews, must pick at his panties since they have become more wadded than usual. He shouts at them, “Shut up, I have a dinner reservation!” Marge grossly says, “Yes, Daddy.”

Jennifer shares that Bill’s affair went on for two months and Bill did not want a divorce. She followed him to Miami, and Bill was turned on by her showing up. Dolores thinks the Aydins have a chance since Bill was remorseful and Frank was not. Frank would not break up with his Trixie since he is a total a*s clown.

Jennifer was not allowed to cry since she had to hide it from her family because no one knew about Bill’s affair. Margaret believed Jennifer behaved like a villain for the last four years and pretended she lived a fantasy life. Teresa’s eyes are rolling back into her blockhead, and she’s annoyed by Jen and Marge trying to talk this through.

Melissa reads the situation correctly and reasons that Jennifer enjoyed that Bill had to suffer the consequences of his affair. She believes Jennifer felt it was vindication since she suffered in silence all those years. Side note: I agree that Jennifer wanted Bill to feel the pain that she suffered, but I do not believe that she wanted the world to know about it.

Jennifer and Bill have decided to try to save their marriage. Marge regrets what she did since Jen’s kids got hurt and “she cut Jen to the core.” Jennifer has gotten over it despite Teresa demanding that she hold her ground since she does not want to be mad anymore. She does have trust issues with Marge after what she did. Tre-Felon eyerolls again, and she looks like she has been constipated this entire reunion. Maybe she smelled a fart, but more likely it is just her own foul, repugnant body odor.

The Real Househusbands join the clown show, and we witness how they had the best time all season. Joe B. had some plastic surgery on his eyes — since he is married to Marge. Evan is proud of Jackie’s progress in dealing with her eating disorder. Bill talks about the affair aftermath. Andy congratulates Louie on the engagement.

Frank shares that David was hurt by the Dolores breakup since he is not one to talk about his feelings. He describes Dolores’s new guy Paulie as a Buzz Lightyear type, and Dolores calls Frank a son of a b*tch. Frank believes they are not able to get along completely since Paulie rightfully does not understand their relationship. Andy surmises it would take a special person since it is not normal to live with all your ex’s boyfriends. Amen.

Frank falsely claims to just want Dolores to be finally happy and that is all that matters to him. He gets defensive about their relationship, and he tried to have dinner with Paulie, but it never happened. Dolores thinks he should let them get established in their relationship before dealing with Frank, who is a lot to manage. Frank, who obviously has his Captain Underpants in a wad over Dolores finally being with a guy who treats her well, pretends he expected more from superhero Paulie. Frank is behaving like a jealous boyfriend instead of an ex-husband, and Dolores is really irritated over his comments.

Louie discusses how he can communicate with Teresa, but she chose to tune everyone out. Is he using flashcards with pictures? Andy FINALLY asks Louie about the alleged break-up video where he proposed to his ex. Louie immediately calls this relationship toxic. He shares that his business partner invited him to his retreat, and he must clarify that he was not naked on the beach. Louie was “made to settle tension” in his relationships. He made his intention to the woman he was dating whom he allegedly was trying to break up with.

Louie was made to commit to her and stop making excuses. He did just that and came home to her demanding a prenup for one mil. Joe G. gives Louie a standing ovation and tells him that is how you explain the video. Side note: Louie is claiming that he was pretending and was made to commit so he was able to participate in the video. Hmm, what about the other love bombing videos that have since surfaced #dirtylouie?

Margaret alleges that she was just trying to help Louie to flip public opinion because she did not want him to look bad. Melissa says that Margaret does get into people’s business, but Teresa accepts no criticism. She recognizes that Teresa cannot understand nor process that Marge is going to help her. Margaret says, “She could have made him look like a superstar.” She believes whoever (Tre) was coaching him to deny everything was wrong. Teresa told him to not answer to anybody except when the Feds and the IRS show up.

Andy then delves into all the press articles. Louie has a lot of women that he dated who have unkind things to say about him, which include road rage incidents and wanting sex on demand. He has also been accused of being emotionally abusive, slashing his girlfriend’s tire, and being physically abusive in front of her kids. Andy then asks, “Is any of it true?”

Louie attributes his bad luck in relationships to the toxic women he is involved with. He tells Andy he cannot even physically have sex four times a day. That does not answer the question, Louie, about your sex addiction — just saying. Louie attributes the domestic violence record to just arguments with his wife. He thinks because he is on a platform with Teresa Giudice, who is a perfect human being, that they want to take him down. Are you sure she is human?

Upon finally hearing Louie’s bullsh*t excuses, Margaret thinks his story song and dance makes a lot of sense. Louie believes Marge when she says that she was just looking out for him. Teresa, who looks like she just ate a lemon, attributes Louie’s acceptance as him just being a nice guy.

Andy asks Louie, “What is your dream wedding?” Louie sees himself as Mr. Big in Sex and the City and wants to have a wedding in the courthouse and just rent out a diner. Andy tells Louie that would not fly with his “extra” girlfriend since she is wearing a disco ball jumpsuit at this reunion.

Jackie, who spent a lot of the season discussing her eating disorder, is happy that she has been more open with Evan since her therapy began. She thinks it is great that it is happening on the show and hopes she will be held accountable now that it is in the open.

Dr. Bill is next on the hot seat, and he mentions that his kids were worried about their parents getting divorced. Bill’s parents were concerned because now the world knows their personal business. Andy reminds these two that your skeletons are exposed when you join a reality show. They did have an agreement if this conversation came up, they would just deny it, but he acknowledges that the truth always sets you free. Bill wants to assure everyone that he does love his wife even though he remained silent about the issue. He admits that he was angry at Marge for disclosing the story, but he was angrier at himself. Bill acknowledges that if he did not cheat then none of this would have happened, and he is not going to deflect like Teresa has this entire season.

Bill gets called out for allowing Jen to throw the Gorgas out of the house. He does not want his loyalty to his wife questioned. Bill thought the fact that security was called meant the situation was out of control. Jennifer questions Evan about calling Bill an accomplice. Evan felt that Bill did not stand up to Jen when she was spilling the information on the Evan rumor. Jennifer now wants to clear the air and be vindicated. She demands Bill tell the truth about what Frank Catania told him. Frank had said something about knowing what this woman looked like. Jennifer wants everyone to know that she was not digging. Was she just researching a story so Jackie could be on the series Snapped when she found this out?

Louie shares that he lost his job because of all the bad press, and you can see Tre does not like him sharing this. Teresa blames Marge for Louie losing his job and for spreading the rumors. Andy tries to ask Louie if he blames Margaret, and the two blithering idiots cannot stop interrupting, and he tells them both to shut up. The guys are then excused. Louie reminds everyone that he has to go home with Teresa, and he tells Tre that if she loves him, she should calm down, and she is making a mistake by the way she is behaving. Teresa is furious when Louie is shaking the men’s hands. Margaret and Louie finally talk to each other while Teresa looks like she may go full-Kong and what is left of her brain matter will explode.

Andy then talks about the altercation between Margaret and Teresa. Andy tells Teresa that she owes Marge an apology. Teresa is claiming she was provoked, and she is upset with herself for getting to that place. She pretends like she was all namaste all season but reached her breaking point. Teresa wants Marge held accountable for antagonizing her.

Margaret reminds everyone that Teresa wanted her hair pulled, flipped an entire table on her, and called her every nasty name in the book. Andy must shut these shrews down again and goes to more viewer questions to fuel this fire.

A viewer calls Teresa out on ending relationships with family members and asks if she ever thought she is the common denominator. Andy then asks Teresa if she is capable of self-reflection, which made me spit out my drink at this absurd question. Andy then apologizes to all the ladies for screaming at them since they were a raving group of banshees. He liked seeing some soft moments between Marge and Jackie and Jennifer.

We then get some final thoughts on the season where Jackie says the show saved her life but not her job. Dolores is grateful that she was able to raise a lot of money at her softball charity event. Margaret was thankful to be able to celebrate Marge Sr.’s birthday. Jennifer wants to evolve and learn from her mistakes. Melissa is happy that Antonia is doing better, and she is tumbling again.

Teresa acknowledges that she had the hardest season, but she met the love of her life. Andy brings in champagne, and Dolores cheers to health, happiness, and making amends. Well, this season looks like it has caused irreparable harm to the Gorga family, but the show must go on or they all will be broke. Happy hump day, Blurbers, and thanks for joining me for RHONJ!