Home Real Housewives of Atlanta News Sheree Whitfield Shares What Happened After Being Stood Up by Boyfriend Tyrone on RHOA, Plus Are They Still Together?

Sheree Whitfield Shares What Happened After Being Stood Up by Boyfriend Tyrone on RHOA, Plus Are They Still Together?

In a newly released sneak peek of Sunday’s upcoming episode of The Real Housewives of Atlanta, fans will finally get to see how Shereé Whitfield reacts after being stood up by her boyfriend, Tyrone Gilliams, after driving two hours to Philadelphia to see him.

Avid viewers will remember that we previously reported that cameras caught Shereé dining alone outside of a Philadelphia restaurant after Tyrone stood her up. He cited legal issues with his house arrest at the time, and eventually, he even threatened legal action against Bravo producers over footage involving him. Now, it seems that may not be the full story.

In the new clip by Bravo Insider, Shereé is looking miserable as she makes up her bedroom and chats with her daughter, Tierra, about the aftermath of the failed reunion that was supposed to happen four days earlier.

Shereé tells Tierra that she’s taking things “day by day” and “that [it] was a lot.”

Cutting to her confessional, Shereé explained, “Tyrone left me in a city that I’m not familiar with. Not a text, not a call. He chose to call me the next day.”

When Tierra asks what the issue was, Shereé explained that he called, and the first thing he said was, “Hey, how you doing? Like nothing happened.”

Shereé continued, “The first thing you should have said to me was, ‘bae, let me explain.’ SOMETHING. So, I said, ‘Hey, let me call you back,’ and I just never called him back.”

According to Shereé, Tyrone has texted and called several times, but she feels she drove all that way for him only to be stood up, which left her feeling humiliated, and she doesn’t feel the need to speak with him.

“I ain’t really left the house since I’ve been back,” Shereé told a shocked Tierra. “Yeah, like it’s f***ing humiliating.”

Yet, it seems like Shereé is not quite ready to let go of her relationship just yet.

“I don’t know if this something I’m ready to give up on. I don’t know. Am I doing this because I invested so much time?” Shereé stated. “I think when you love someone just don’t stop loving them overnight… It’s just not that easy to move on.”

Things haven’t been any easier for Shereé since rewatching this season’s footage. And if her Twitter posts offer any indication as to where she and Tyrone stand today, it’s not looking good for the couple. 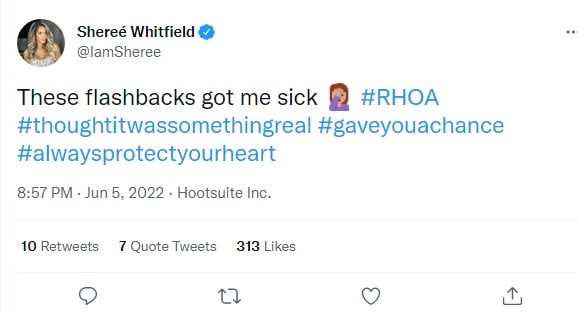 This was followed by a tweet urging women to go with “[your] gut.”