RHOA Recap: Drew Calls Sanya “Unstable” Amid Fight as Marlo Accuses Kenya of Lying and Gets Emotional After Call With Sister 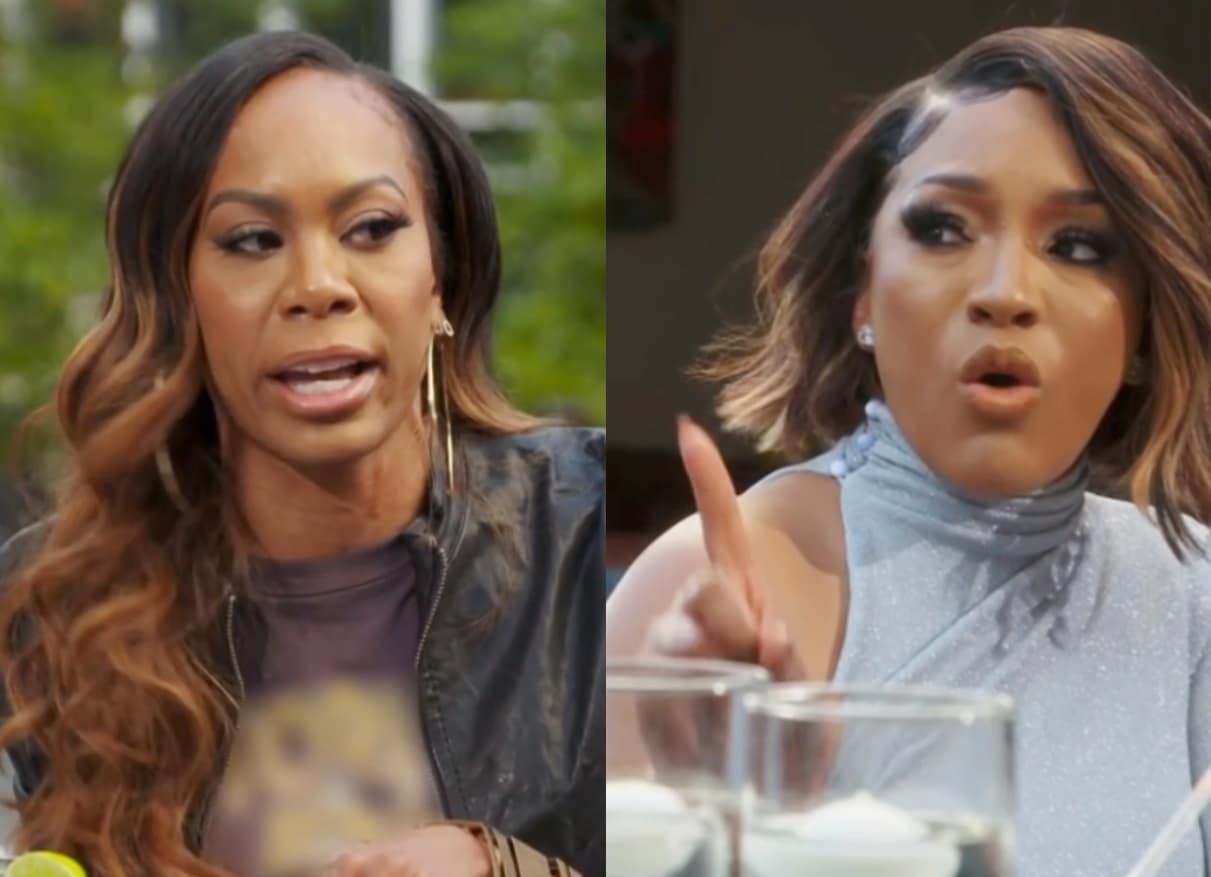 This week’s episode of the Real Housewives of Atlanta is titled, “Who gonna check on me, Boo?” Sheree is still reeling from Tyrone standing her up and Kandi not being there for her. Also, will Drew and Sanya be able to at least pretend they were ever friends? Watch and see!

Drew trudges in and looks like something the cat just dragged in from outside. Sanya pretends that she is happy that Drew showed up for dinner even though she did not partake in cooking it. Drew then suggests that Sanya did not pay her makeup artist and assumed it was a freebie. Sanya resents the implication that she does not pay her bills. Mama Joyce comments that they are fighting over something nonsensical, and I could not agree more.

Sanya then questions Drew’s business and its authenticity. She probably thinks the app is a link to Drew’s surgeon, who is the one who really drops/cuts it! Sanya gets annoyed by the faces that Drew makes, and so does Mama Sharon, who will take that b*tch down if she does not show her daughter some respect. Drew calls Sanya a “clout chaser.” Sanya proclaims she is an Olympic gold medalist and she better bow down to her greatness. Drew is annoyed that Sanya is making this a fight in a group session. Sanya then whips out her Olympic medal, and Drew in her ITM thinks that she is trying too hard. She is going to give a prize for the best Dutty wine dance. Marlo wins the gold medal for her Jamaican dance since we all know she likes to get down and dirty, and most likely there is wine involved!

Kenya shares with Kandi that she found the vibrating panties to be an inappropriate gift. Mama Joyce pipes in that no one controls her vagina but her. Side note: Can you imagine what tea Mama Joyce would spill if she were in a moment of ecstasy? Sorry, I digress, but I would like the even more uncensored version of Mama J. Kandi is not buying Kenya’s prim and proper act, and neither are we. I cannot forget the image of Kenya with her legs spread open when Bolo was in attendance in SC. Kandi knows that Miss Kenya has slept with half of Hollywood and needs to stop clutching her pearls. She mentions Kenya’s movie role in the film Trois, which is a sexy thriller about a couple who engage in a Ménage à trois.

Marlo is now attending the Women’s Expo, and she wants to promote her foundation, Glam It Up. She is hoping to inspire foster children — to emulate her? Marlo mentors them and takes them out to fancy restaurants. She thinks that showing them a kid who has made it out of the foster care system and succeeded by very questionable means will give them something to aspire to. Did this expo do any research on who was speaking at this event?

Sanya and her family talk about the clout chaser comment. She also questions Drew’s role in the show The Game. Sanya gets a chuckle just thinking if she was even in the show. She believes she was called out since everyone did not get an invite to her Mommy Nation video. Sanya has deemed herself the clout, and she resents the implication that she needs to hang on anyone’s coattails.

Drew calls Marlo, and she shares that she is using her app to find Ralph’s location work out. She thinks that Sanya is betting on the wrong team. Marlo does acknowledge that Drew does make a lot of faces, which tends to provoke. Marlo then calls Kandi out again about not supporting Sheree when she needs a friend. She is really being a pot-stirrer this season, isn’t she?

Sheree has her life coach, Jack, come over for a pep talk. She shares how Tyrone stood her up at the restaurant in Philly. Jack tries to get her to see that Tyrone saw her as a fantasy since he was locked up in prison. He then grossly tells her that Tyrone was jacking off to her image!?! Did he just say that he is using her image for his spank bank? YUCK. Sheree cannot say for certain that she will not talk to him in the future. Jack wants her to pour herself into She by Sheree. He wants her to focus her energy on the business and stop dating jailbirds. Could Jack have just led with that advice instead of the nasty visual he gave Sheree?

Kandi and Todd discuss donating some things to Marlo’s charity. Todd is going through her collection of clothes, and he is dissing her choices. He wants to know more about the TV show she is doing. Marlo calls and tells Kandi that she does not want her hand-me-downs. She is offended that Kandi wants to bring a trash bag of clothes to her event. IMO, Kandi looks like she does not buy her things at Target, so why would someone not appreciate her designer pieces even if they were a little dated?

Sheree and Kenya are meeting up and eating a “womelet,” which is an omelet made in a waffle maker. Kenya shares that she did not meet her product deadlines with Walmart due to supply chain issues. She does not have a team to help her get out of this situation. Sheree shares that she is struggling with her one-woman show. She claims she is hit on by the men she has asked to help her.

Kenya is also upset that Marlo is saying that she is not sick. She is not trustworthy, and Kenya will watch her back. Kenya tells Sheree that she would have been there if she had not been sick. Marlo is trying to convince the other ladies that Kenya is a liar.

Drew, who looks a little too dewy, and Sanya both arrive at the restaurant at the same time, and the awkwardness is palpable. Marlo arrives and manages to divert the attention to herself. She shares that her sister is refusing treatment for her mental disorder. Marlo thinks her sister needs the in-patient treatment, and she is hoping that she and her nephews can convince her to do that.

Kenya and Sheree then join the group, but Kandi will not be joining them since she is filming her TV show. Marlo then shades Kandi again over not wanting her hand-me-downs for her foundation. Kenya does not think she should let them think their value is in their clothes. Marlo then slams Kenya, and she believes she must be sick since her wig is jacked up and looks like she pulled it out of a trash bag. She is almost gleeful to see Kenya like this since she promotes her haircare line but decided to slap on a wig today and looks like a Mary Kay saleswoman. Yikes, Kenya must be really sick since she let that one slide!

Sanya then admits she felt bad that she did not invite everyone to her event. She has another consolation prize for the second tier, which is a collaboration with Nike. Drew then wants to know if she will be invited/uninvited to this event too. Sanya loses it and tells Drew she is, “Driving me crazy, and I don’t like when you keep talking over me, seriously, it’s very frustrating!” She is resentful over the implication that she does not pay people and how it would hurt her reputation. Drew then tells Sanya that she is unstable. Well, things then deteriorate and Drew’s chubby hands are a flailing! Kenya then sees it is getting ugly, and she tries to pull Drew’s chair away from Sanya but cannot move it. Drew must need to drop a little more!

Drew and her loose nipple, which is falling out of her poorly fitting dress, must leave since the conversation got too heated. Kenya then tells Drew that she was cutting Sanya off when she tried to talk and that set her off. Sanya then tells Marlo and Sheree that she will uninvite them if they piss her off too. She thinks an invite to a promotional event is a hot ticket for some crazy reason! Sanya does not yet understand that they only want to come so they can earn some coin while they are being filmed.

The final scene involves Marlo making a call to her sister, who is incarcerated. She has the boys present so they can talk to their mom. Marlo’s sister is yelling at Marlo, and in a rage, she threw a chair at the jail TV monitor. I found that scene to be very troubling and sad for those two boys who had to witness their mom like that…

Next week, Drew tries to show the ladies her app is a real workout program. Kandi, Marlo, and Kenya continue to be at odds with each other. I hope everyone who still has their dad 😢 was able to celebrate Father’s Day! Be well, Blurbers, and see you next week for hopefully a more exciting episode than this one!