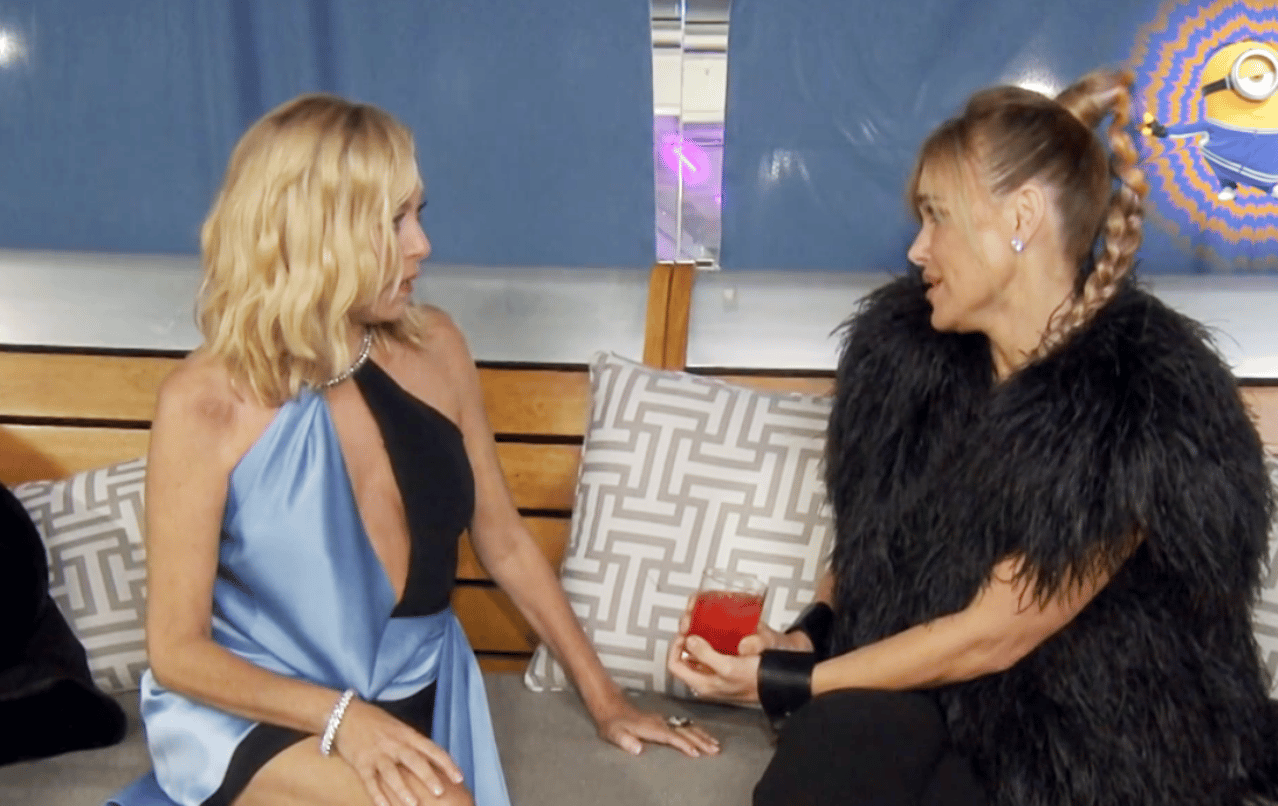 Diana is certainly making a name for herself (and not a very good one) on this episode of the Real Housewives of Beverly Hills. Garcelle’s 55th birthday party is meant to be a lively celebration, but it takes a dark turn when a conversation goes south between Diana and Sutton.

Garcelle meets up with her friend, Sheree Zampino, and they catch up like old friends do. Sheree was married to Will Smith and has a son with him. Sheree and Will have done a fabulous job co-parenting and have even been #goals for Garcelle. Garcelle clarifies that she dated Will Smith AFTER Sheree’s divorce and that she didn’t even know Sheree at that point… so it’s all good in girl code world. Garcelle discusses her upcoming birthday with Sheree, and she shares that all of her sons will be in attendance, including her oldest son, Oliver. She has high hopes for this party, so all the ladies better behave.

Crystal and her housekeeper, Lucy, making Instagram videos about cocktails is everything. Luckily, she wraps up the filming before her husband, Rob, comes home. Crystal explains that her brother is still living with her family and it’s great having him around, considering Rob is busy working on a new movie. Once the kids head off to bed, Crystal talks about Diana and how she had a rocky first girls’ trip. Crystal explains that when you “jab at Diana, it’s nuclear.”

We learn that Rinna will not be at Garcelle’s party cuz she has to go out of town for Harry’s work function, but Kyle is hopeful (I mean, she practically begs) that her husband, Mauricio, will be there. One thing’s for sure — Diana won’t be at the party. Over a text message, Diana explains that she has been bleeding for eight weeks straight after her miscarriage and the trip + flying really put a lot of stress on her body. Therefore, she is being put on bed rest by her doctor. In the text, Diana states how she wouldn’t normally relay this information in this manner, but, “Garcelle, misspelled, might think I’m rude, so there it is.”

Erika is busy getting ready for a shoot for Pretty Mess Hair. She explains that this has been a great distraction from all the heavy sh*t that’s been going on in her life. While getting glammed, Erika reminisces about her grandmother and feels like her grandmother believes she should continue persevering despite the hardships occurring in her life.

Sutton heads over to Dorit’s house and we are graced with Dorit’s mother, Rachel. She, too, has a strange accent that you just can’t pinpoint. Sutton talks about an upcoming doctor’s appointment, and she explains that she is getting a pellet to help balance her hormones. Sutton swears by this and believes that she is a totally different person since the procedure — even if the Mexico trip was a stressor.

Sutton is happy to report that things are better with Crystal, but she is less than thrilled with Diana. Sutton tells Dorit about how Diana shunned her on the PJ and wouldn’t let her sit with them. Sutton swears it is Diana’s form of punishment, and she does not appreciate Diana spelling Garcelle’s name wrong in the text to the group. That’s a true friend right there! Sutton wonders if Diana is more of a “sniper,” and she questions her true character.

Garcelle’s got a full house of sons. She explains that The Real threw her a birthday party, and when Oliver surprised her, it put her right over the top. Garcelle is so excited about her party and is in such a great mood for the event… But don’t forget that Denise will also be at this party, sooo things might take an ugly turn.

Over a FaceTime call, Sutton tells Kyle that Diana is, in fact, planning on attending the party despite the doctor’s orders. Interesting… Diana AND Denise?! What did we do to deserve all this messiness?

Garcelle’s party is a star-studded event, and the birthday girl arrives in her beautiful white dress ready to rock! As she is making her rounds, Diana rolls up, despite her recent health issues, because she wants to “honor” Garcelle’s birthday… aka, her attendance is a way for no one to call her rude. Diana comes bearing the famous book, Room 23, and it is even signed by Diana herself. Interesting to see Diana ready to party after claiming to be on her death bed, but I digress.

Garcelle explains that Kathy sent her a beautiful cake, but she could not attend. However, Sheree can swing it. Sheree meets all the women in the group, and they all learn how Garcelle got Sheree’s sloppy seconds with Will Smith. LOL. In the meantime, Diana is busy showing off her diamond clasp Birkin bag to Kyle. AND bragging about how during the fires a few years back, she chose to save her bags and diamonds. Does she think this is a good look?

As Kyle hangs on every word that comes out of Diana’s mouth, Diana explains that she doesn’t “jab,” but rather, she brings it full-blown. Diana thinks it’s funny that Sutton is trying to beef with her and tells Kyle, “You know how I have her in my phone? Bacon-eating-vegetarian.” Diana thinks she is a real comedian and brags about her destructive personality. Luckily, Garcelle’s cake-cutting interrupts the sh*t-talking session before Diana can get herself in more trouble. The night wears on, and the women are busy cutting up a rug on the dance floor…and doing splits. Kyle needs to bring it down like 17 notches, and it is very clear she is a one-trick pony.

During a quiet moment, Sutton pulls Diana aside to try and figure out Diana’s diagnosis. Sutton talks about miscarriages with Diana, but Diana repeats “bring it on” to Sutton and calls her fake. Sutton reminds Diana to be nice, and to that, Diana retorts she would head-butt Sutton back in Bosnia. Look at her trying to be scary! She calls Sutton boring and lets her know how little she appreciated Sutton chiming in about her father’s suicide after learning about Diana’s brother’s death. Diana refuses to let Sutton talk, and this doesn’t seem like the best place to have this conversation, especially because Garcelle is team Sutton and it’s her BIRTHDAY.

At this point, Diana is not even making sense. When Garcelle gets involved, Diana continues to push it. Garcelle tells Diana she has a chip on her shoulder, and Sutton spits out that “the bed rest” did Diana “good.” Ooph. Diana won’t let Sutton off the hook for eating bacon and calling herself a vegetarian. This conversation gets off the tracks really fast.

Sutton tries to redirect the chat, but Diana starts picking at Garcelle. Diana muses if Garcelle is Sutton’s bodyguard. To that, Garcelle tells Diana that she is not gonna mess up her birthday party, and she walks away from the “b*tch.” Sutton calls Diana an “as*hole” to her face, and the only one trying to stick up for Diana is, of course, Kyle, who for some reason, has inserted herself right smack in the middle of this fight. Classic.

As the night goes on, Garcelle realizes that Denise never showed up at her party. TBH, I totally understand why Denise wouldn’t want to be around this group of women! I mean, take a look around this event. Erika takes it too far and curses left and right about Denise. Garcelle tries to diffuse Erika’s anger. Speaking of anger, it is evident that Sutton and Diana’s anger will not be over any time soon. Sutton and Diana are still going at it, and it doesn’t help that Kyle is the drunken referee.

Sutton is not backing down and tells Diana, “How dare you question my empathy? You’re a soulless person.” Kyle stops Sutton right there, but Diana doesn’t seem to mind. In fact, I feel as though it is fueling her attitude further. This is a to-be-continued kinda episode, but Diana and Sutton are going nowhere good… FAST.