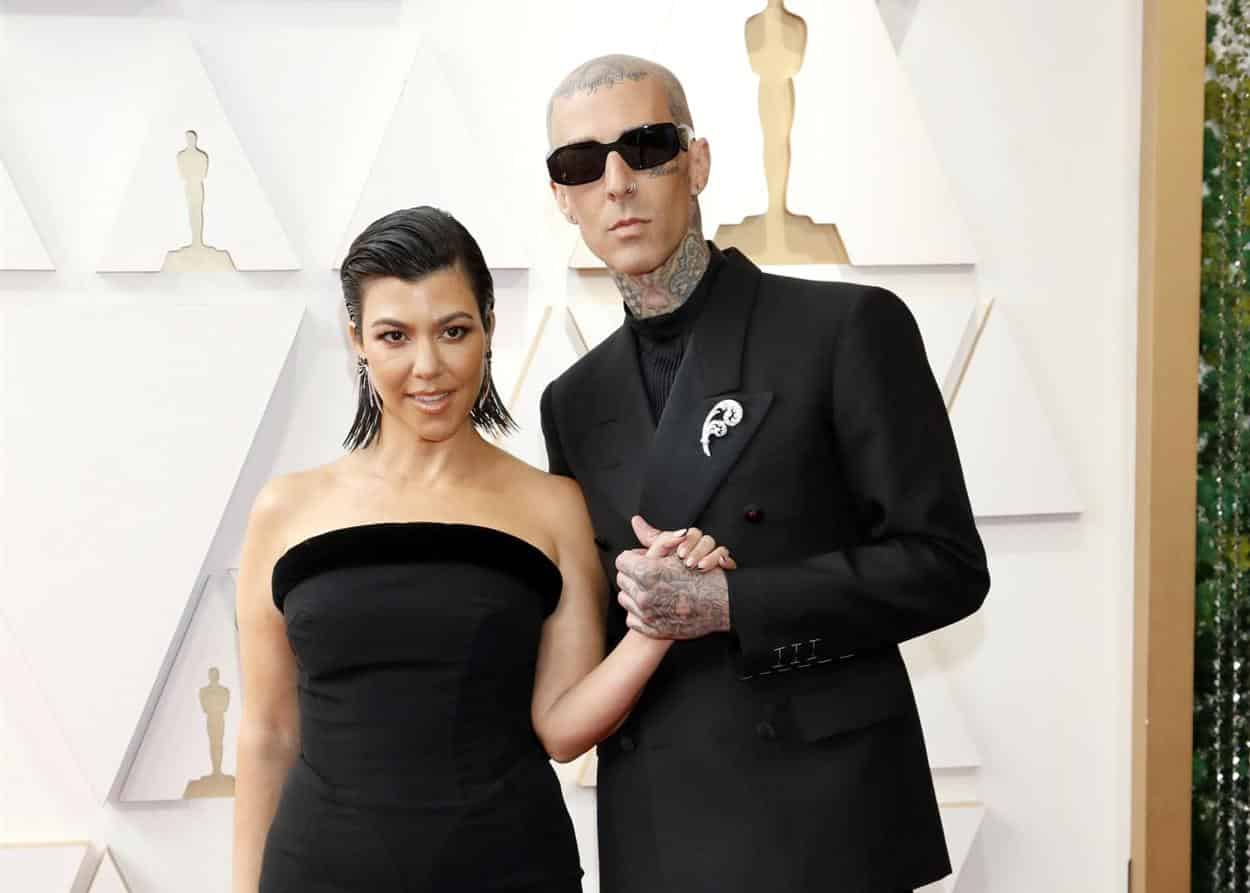 Blink-182 drummer Travis Barker is breaking his silence on his recent hospitalization and confirming reports that he was rushed to the hospital due to pancreatitis.

On Saturday, July 2, Travis took to his Instagram Stories to let fans know what exactly led to his “life-threatening” condition.

“I went in for an endoscopy on Monday feeling great,” Travis began. “But after dinner, I developed excruciating pain and have been hospitalized ever since.”

Continuing, he explained that during the endoscopy he had a “small polyp” removed in a “sensitive area.” He said that the procedure was usually “handled by specialists,” but unfortunately, the procedure “damaged a critical pancreatic drainage tube. This resulted in severe life-threatening pancreatitis.”

Thankfully, Travis said he is feeling “much better” due to “intensive treatment.” 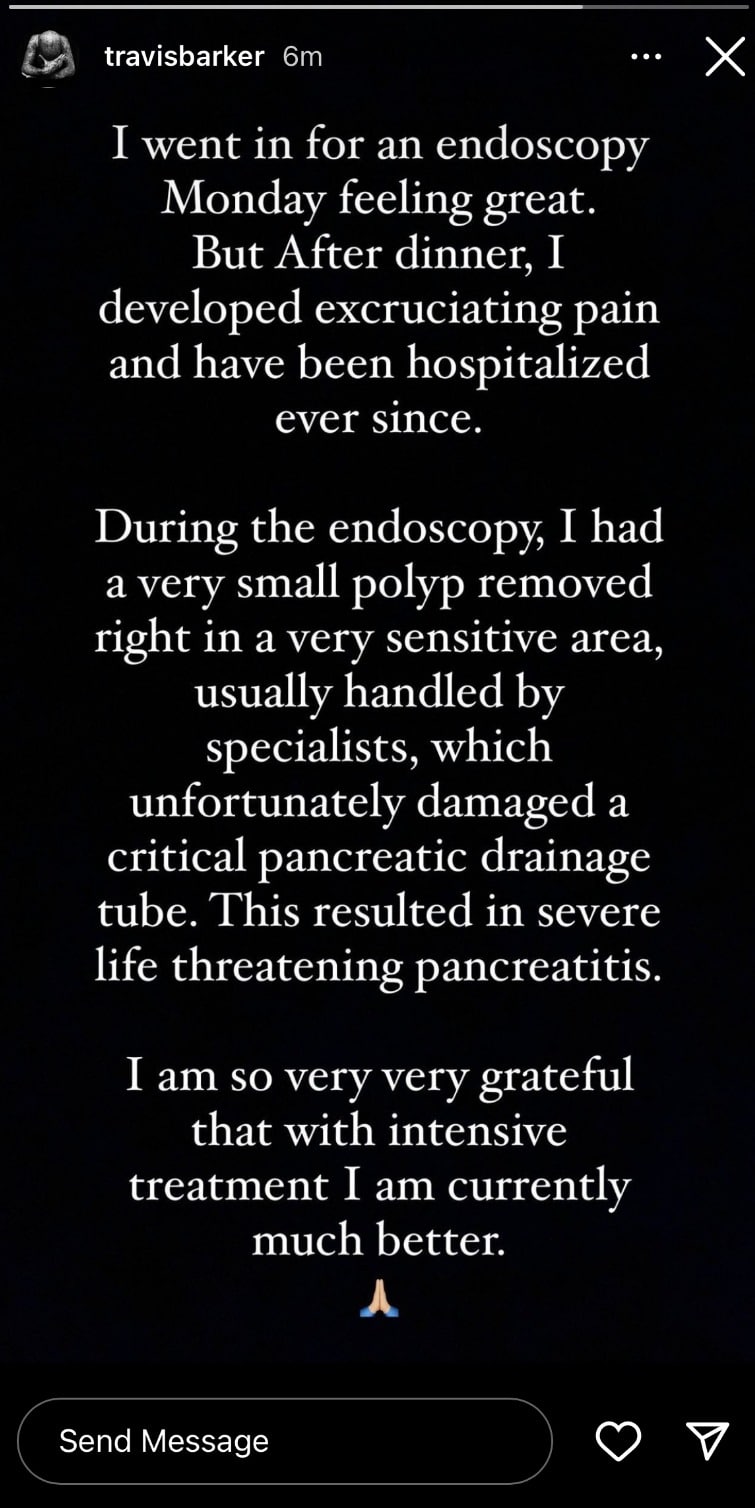 Travis’ wife, Kourtney Kardashian, also took to her Instagram and revealed that she too had an endoscopy, and she thanked the “doctors, specialists, and nurses” who cared for the couple during their “scary and emotional week.”

Kourtney posted, “Oh, what a scary and emotional week it has been. Our health is everything and sometimes we take for granted how quickly it can change.”

The Kardashians star continued, “I am so grateful to God for healing my husband, for all of your prayers for him and for us, for the overwhelming outpouring of love and support. I am so touched and appreciative.” 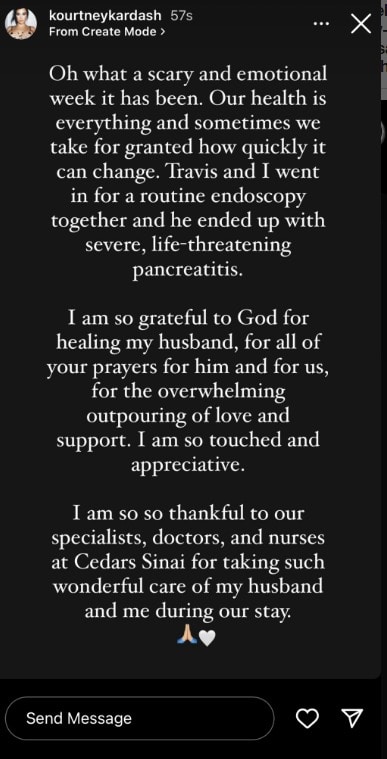 However, Kourtney did not have any kind words to say about the paparazzi, who she called out for “monetizing” their “nightmare” and selling photos of Kourtney. The photos insinuated that while Travis was in the hospital, she was “out and about” rather than staying by his side — an accusation she vehemently denied as she confirmed the photos in question were taken weeks ago.

Taking to Instagram again, she blasted the paps viciously, posting, “A new level of low, monetizing off our nightmare.” She added, “Savagely uncool when I actually didn’t leave his side…shame on you.”

Kourtney continued in the post, “And to the paparazzi who sold pictures of me ‘out and about’ while my husband was in the hospital fighting for his life…these photos were taken weeks ago…I didn’t forget about you.” 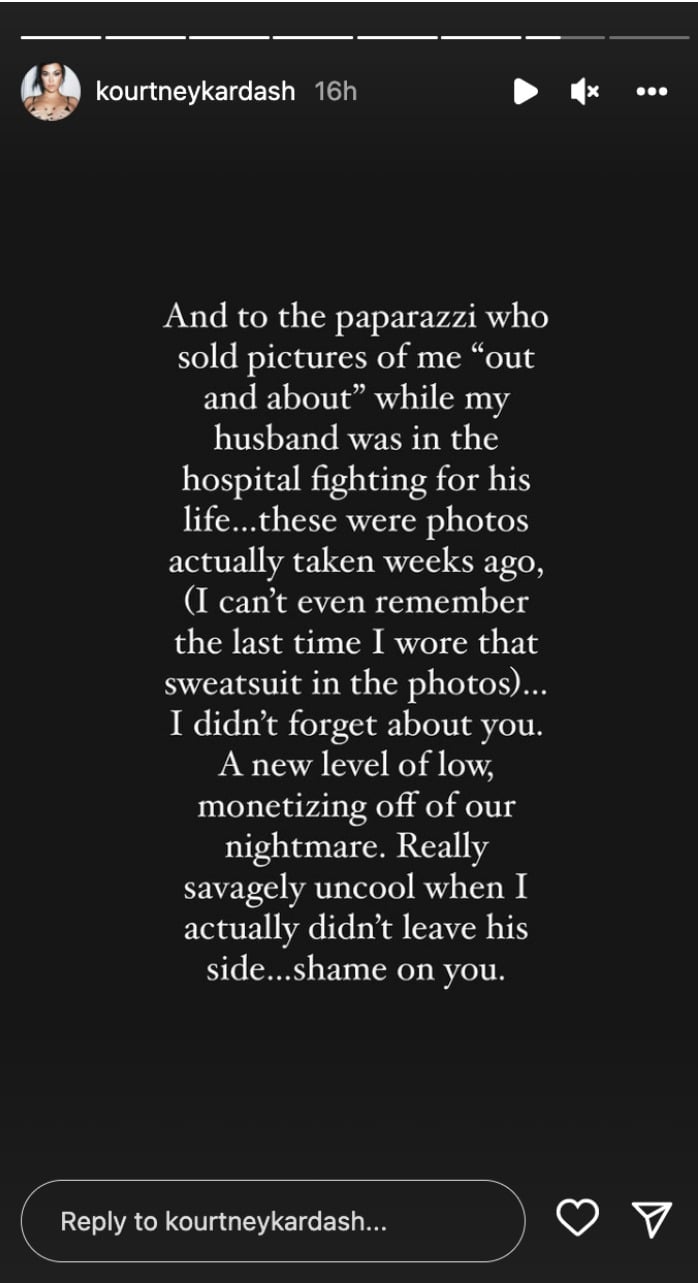