RHOBH Recap: Garcelle Confronts Erika for Cursing at Son and Calls Out Kyle for “Jumping Ship,” Plus Sutton Calls Diana Delusional Amid Feud 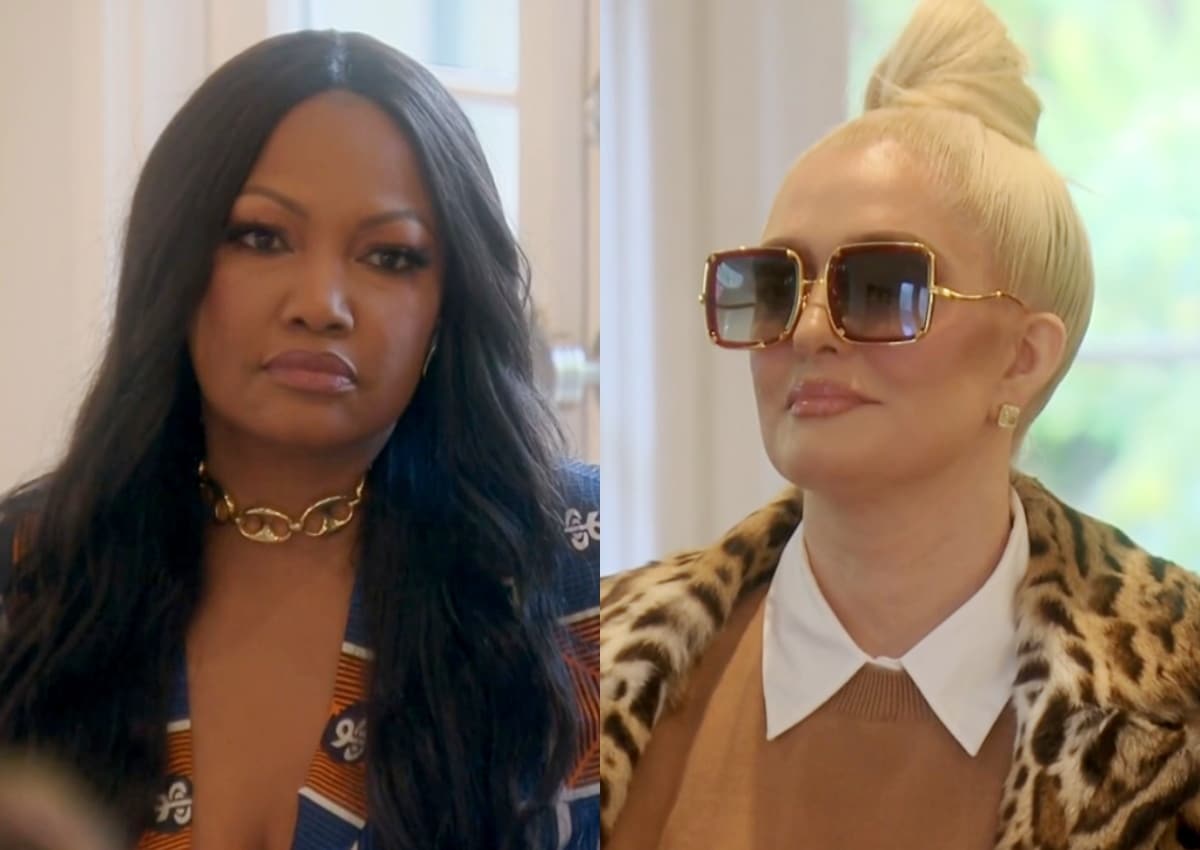 Erika apologizes for the way she spoke to Garcelle‘s sons, but it doesn’t look like Sutton will be getting an apology from Diana any time soon. On this episode of the Real Housewives of Beverly Hills, it’s going to take more than a one-on-one lunch date to mend this relationship… and honestly, will Diana and Sutton ever be able to move on?

It’s Sutton’s housewarming party, but Rinna doesn’t understand that you should treat the hostess with respect. She comes right at Sutton, asking her if she called Diana a “mother f*cker and soulless,” which leaves the rest of the women staring aghast. Loving Garcelle reminding Rinna that she wasn’t even at the party. Rinna claims she is only reiterating what Diana spoke to her about, but Sutton is perplexed considering she left her rocky conversation with Diana in a good place… she thought?

Kyle butts in, and Garcelle tells Kyle she “jumped ship real quick” the night of the party. Kyle adamantly believes that she stands by her own decisions and disagrees with Garcelle’s comment. Riiight.

The women trek back inside Sutton’s house after the awkward conversation only to peruse Sutton’s dating apps. They act like 17-year-old girls browsing and shriek with glee when they FaceTime Sutton’s Bumble match. The poor guy probably got scared away from this crew, and Sutton is playing damage control…again.

While these shenanigans unfold, Garcelle sits quietly watching “One-Drink-Erika” turn to three… and she decides that now should be the time to have THE conversation. Garcelle makes it clear that under no circumstances should Erika ever disrespect any kid, especially HER kid. Erika takes full responsibility, but she attempts to say her lingo didn’t come from a bad place. Nevertheless, it was wrong.

Garcelle calls Erika out for her imbalance of meds and cocktails, and when Kyle jumps in again, Garcelle states, “This is what I mean by jumping ship, Kyle.” Garcelle makes it clear that she is NOT talking to Kyle. Kyle simply wants to explain how fun it is to see this new side of Erika, but I think Kyle has a weird idea of “fun.” Erika does a fabulous job puffing up Garcelle’s ego by complimenting her mothering, and it wins Garcelle over a bit.

The next day, Garcelle is out shopping for shoes with her kids in what must be the biggest sneaker store I’ve ever seen in my life. She is happy to spoil her boys (within reason) since she worked hard for her money, and she raised kind, compassionate people. Two thousand dollars later, her sons are happy, and Garcelle is sticker-shocked (me too).

Happy Hannukah in the Umansky household! They are hosting the Kemsleys (minus PK) since Dorit is trying to keep things as normal as possible since the home invasion. Kyle also greets her in-laws, and it’s a full house to celebrate the holiday. Dorit’s son knows the entire history of Hanukkah, and it is quite impressive. Kyle is thrilled to share in these special moments with the special people in her life.

Like Kyle, Diana loves having a full house. Therefore, her son and his girlfriend have decided to move into the home. Interesting to see her 22-year-old son next to her 22-year-old boyfriend. JK. He’s not 22. Her boyfriend is 33. They decide to FaceTime Diana’s daughter, who is busy living in Spain and pursuing her horseback riding dreams. She shares how she is riding for the U.K. now, but she will be riding for Bosnia in a few months. It’s almost like they never check in with her and they are learning all about her competitions for the first time. Awkward.

Garcelle, Sheree, and Kyle get together for some drinks and catch up. Garcelle gets right into it and focuses on her conversation with Kyle and Erika at Sutton’s. Garcelle explains that she just wanted to have the chat with Erika, and Kyle butts in again to remind Garcelle that Erika’s messiness only happened “two times.” You would think, as a friend, you would notice Erika’s behavior is self-destructive… unless you’re Kyle. Then it’s just FUN! But it is so interesting because if Erika acted that way towards any of Kyle’s children, I bet Kyle would not be calling Erika’s behavior freeing!

Kyle tries to spin it as if Erika is just letting her hair down, but Garcelle questions if that type of behavior could lead to alcoholism. Kyle calls that a “very dramatic statement,” but Garcelle is not backing down. Garcelle sees it as more of a “let’s figure it out so it doesn’t happen again” kind of behavior because she has seen her son go down a dark path, and she does not want that for Erika.

Diana’s stylist is there to help clean out her closet. Diana explains, “I have a lot of friends, and a lot of them are very famous people,” which would explain the million-dollar wardrobe. Diana is planning on donating many of these pieces, so, enter Erika. Erika claims to not know why she is there and is absolutely salivating over her clothing. But don’t forget — according to Erika, she HAD all of those things. Erika claims she is not jealous, but I think I see her turn green with envy.

Erika tells Diana how Sutton told the table what happened at Garcelle’s party. Erika explains that last year, Sutton pulled the worst out of her. Erika is certain that things are not good between Diana and Sutton, so she advised Sutton to start back at zero with Diana and try again. Diana wonders how Erika could even be peaceful with Sutton after last year, but interestingly, she does not agree with Erika’s advice to start over.

Kyle is busy bringing snow into her house for her upcoming charity event (why doesn’t she just go to Pasadena to get some??). Meanwhile, Diana is on her way to have lunch with Sutton, which can only mean one thing: DRAMA. Sutton phones Garcelle on the car ride over for some moral support, and Garcelle does a fine job of that. Sutton explains that she is a very complex person, and Garcelle wonders where this beef is gonna end.

At the restaurant, Diana gives Sutton a stiff hug (maybe so her perfectly placed baseball hat doesn’t fall off her head). Diana suggests that they start from the beginning, so Sutton brings up why Diana would say Sutton is “being clumsy with words.” Diana states she stands corrected. She actually doesn’t believe Sutton is clumsy, but rather, Sutton means exactly what she says. Diana believes that Sutton was provoking her at Garcelle’s party, and Sutton owns that and states she was a bit sarcastic.

Sutton wants Diana to say that mocking her about her miscarriages was not right and apologize — the way that Sutton apologized for the things she said. Sutton tries to explain that she was trying to bond with Diana, but to that, Diana says, “I really feel like I need professional help with communicating with you.” Well, this sit-down is going well…

Sutton explains that she doesn’t share the stories of her miscarriages with many people, but Diana thinks that Sutton just threw it out there to try and one up her. So twisted to even think that. Diana asks Sutton if she’s alright, and she repeats to Sutton, “Are you hearing yourself?” Sutton brings up how she thought all was well between them, but Diana admits to being fake and phony. Therefore, she’s the fake one here. Sutton tells Diana “shame on you” for outwardly being fake, and Diana questions for what. She feels like Sutton abuses her and that Sutton cut her deep. Diana wonders how to move on from here.

Sutton admits to being a reactionary hot head, but she’s also a good friend who is loyal. To that, Diana retorts, “so you say” over and over, and it’s enough to make Sutton’s head pop. Sutton excuses herself and leaves since she feels as if she is just playing ping-pong with Diana at this point, but she hopes they can be pleasant at Kyle’s upcoming charity event. Fingers crossed.