RHOA Recap: Kenya and Marlo Fight in Blue Ridge as Sanya Invites Ladies to Jamaica, Plus Marlo Reels After Sending Nephews Away 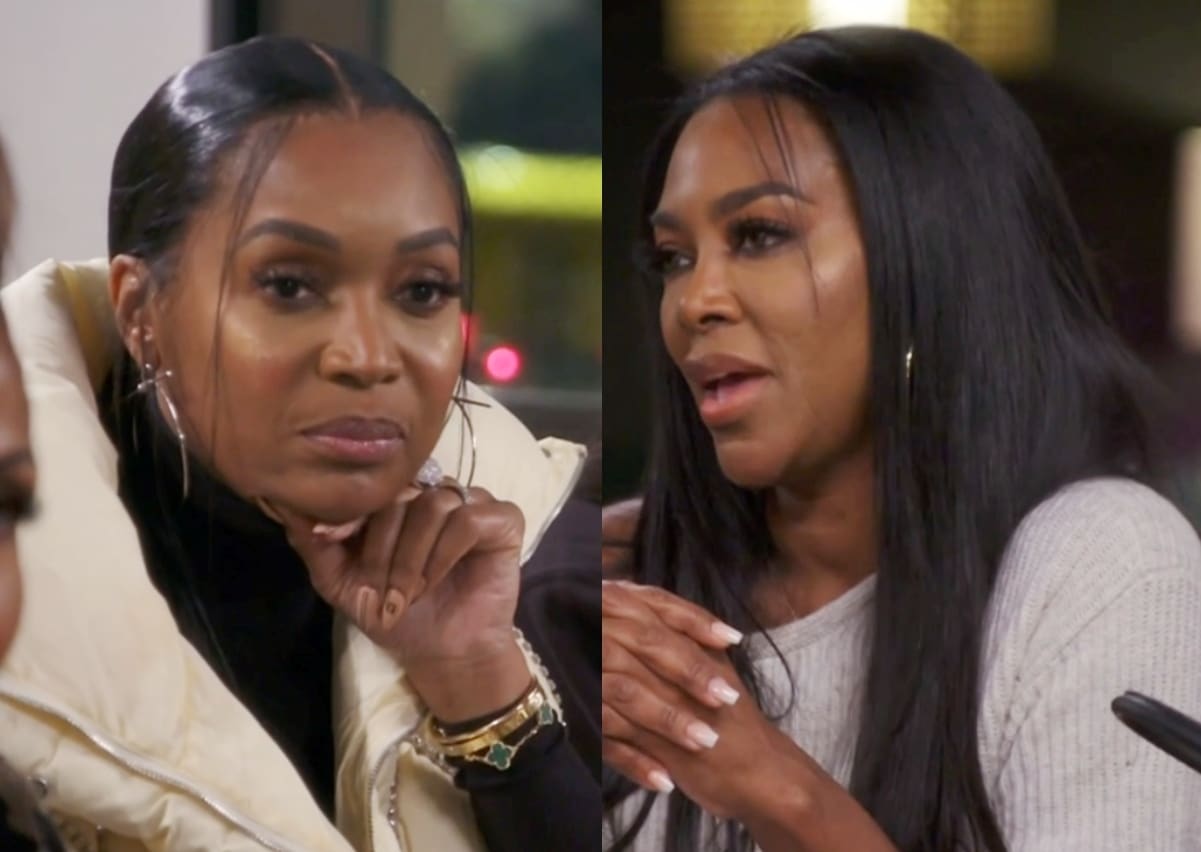 This week on the Real Housewives of Atlanta, the ladies are headed to the Blue Ridge Mountains! It is a terribly slow climb up the mountain/episode, but try to stay awake for the last five minutes when Marlo and Kenya meet at the top!

Kenya brings Brooklyn to play with Kandi’s baby, Blaze. Kandi is so thankful that they can share this time together just enjoying their adorable kids. They chat about how much fun Kenya was when she was overserved the night before. Kenya shares with Kandi the struggles she has been having with her supply chain. She is looking for a local supplier, and she has hired a COO to help her navigate the challenges.

Kandi then pivots and changes the conversation to Marlo’s nephews. Doesn’t it seem like Kandi cares more about those boys than Marlo does? Side note: Did you catch how Kandi did not seem to even watch Blaze in the play gym while Kenya was watching Brooklyn constantly? Maybe having multiple kids make you a little less of a helicopter mom. Sorry I digress, I was a helicopter mom so I can recognize the signs…

Kandi is now packing for the “camping trip,” and she decides to call Marlo to check on her. She tells her that Kenya is allegedly not coming on the trip, and Marlo is not the least bit disappointed. Production is going to keep adding to this narrative throughout the episode so they can make the final scene more dramatic.

Marlo is going through the boys’ room and checking for snacks that may be hidden away. She does find some frosting cans hidden in there, and I had to laugh since my sister and I used to do the same thing in our room. Marlo’s sister Crystal comes over to see the mess that normal teenagers can leave. She shows Crystal the hole that Michael punched in the wall when he got upset with her. Crystal thinks they just need structure and some follow-up with them to see if they are doing their chores. She thinks Marlo is only strict about their schoolwork and lets them get away with keeping their room clean.

Marlo is asking for a 30-day break, and she thinks the boys are better off with her. She is going to give Crystal some money for taking care of the boys. Crystal is concerned about the message the boys are getting now that they have been relegated to her house, which does not offer the luxuries that Marlo’s house does. Marlo is going to try and work on talking nicer to her nephews and not behave like their mom did. She will save her sh*t-talk for Kenya and try to be better for the boys. IMO, Crystal is the one who needs a break! She has four kids of her own and a full-time job, and now she also has two teenage boys who are struggling. Crystal needs to head to the mountains, and Marlo needs to suck it up and be there for the kids.

We are now heading to the mountains. Marlo and Sheree are traveling in style in a Rolls-Royce Ghost, and Kandi, Monyetta, and Drew get the Aston Martin. Kandi gets some OLG wings delivered to her house from Marlo, but she is not allowed to eat them in the car. Marlo knows how much Kandi likes to eat — why would she put her in the car that does not allow eating? Sheree is chowing down in the Rolls-Royce, so I guess the rules, as usual, do not apply to Marlo? Drew seems to be on edge wondering if Fatum is going to sneak into their trunk and announce she has found some more aliases for Drew and Ralph. She pretends that she sees Fatum as some annoying stalker, but I think she has hit a nerve with Drew.

Marlo and Sheree arrive at the gorgeous lodge, which is no cabin in the woods! WTF is Drew wearing? She looks like she stripped off Sasquatch’s arm fur and sewed it on her jacket. Sanya and Ross are working on the iFit trainer program, so she will not be arriving until later.

The ladies take a van to go out to dinner, and they chat up some other locals in the restaurant. Marlo informs them that she chose this location since it is a fun place to visit. She wants to get Kandi drunk like Kenya did, and Kandi assures her it is not going to happen. Drew then asks Marlo about the boys and what she is going to do. In their ITMs, the other ladies are concerned that Marlo has given up on the boys.

Kandi then gets texted by Kenya, who is outside and wants to know if anyone is missing her. Kenya drove there herself so she can have her dramatic entrance and earn her per episode check. Marlo looks like she just got indigestion seeing Kenya walk in. She is hurt that Kandi knew Kenya was coming and did not tell her. Kenya is going to stay somewhere else since she brought Brooklyn with her. She then gives some convoluted story that Brooklyn is not even there yet and is unsure where she is even staying. Does she expect Marlo to beg her to stay at the house? Not going to happen…

Sanya then arrives after Drew tells the group that they are not in the best place. She shares with the group that they are all invited to Jamaica and iFit is paying the bill. Woohoo, I love Jamaica and have gone there four times, and that trip should liven up this season! Kenya is being evasive about where she is staying that night. Marlo tells Kenya if she does not stay at the house she is not allowed to hang with the group. She is being petty about this, and Kenya is being evasive over where Brooklyn is.

Kenya wants to be direct with Marlo and share with her what is on her mind. Marlo keeps interrupting when she tries to explain her feelings. Finally, Marlo gives Kenya the floor and she releases all her true feelings about Marlo.

Kenya goes on about Marlo not being happy for the other ladies and pretending that she is a loving friend. She has not gotten over Marlo saying that she did not carry Brooklyn, and she finds that comment to be unforgivable. Kenya questions her sincerity and calls the type of love she offers toxic. She does not appreciate being called a liar — specifically over being pregnant with Brooklyn and being sick for Sheree’s party. Marlo does the whole “I hate that you feel that way” bullsh*t non-apology. She tells Kenya she will never be the friend to kiss your a*s, but she will call you out on your hypocrisy.

Marlo then says they have remarkably similar upbringings and lots of insecurities as a result. She mentions having big feet as being one of them, which is bizarre — as if that is her only insecurity! Marlo resents that Kenya claims her wealth comes from prostitution. She is not educated and as well-spoken as Kenya, and she envies Kenya for that. Side note: I do not think that Marlo will ever be able to accept that Kenya was able to overcome a rough childhood and make something of herself. Marlo had to be scrappy and look for opportunities and sugar daddies to help her to overcome her past. The resentment lies there, and that is the choices that they both made to get where they are today. Marlo gets criticism for her choices, and Kenya has gotten accolades, and that has put a divide between them that cannot ever be bridged IMO.

Marlo does compliment her on being an amazing mom. She acts like she wants all the ladies to help each other out and be a support system. Marlo is asking for respect from Kenya and wants her to play along with the rules that Marlo has created for this trip. And if she will not comply, then get her a*s back on the road to Atlanta.

Well, the battle lines are drawn, and we will have to see how the battle of the Reality Titans will commence next week! Let us hope they stay away from the mountain edges so no one gets pushed off! See you next week back in the Blue Ridge Mountains, and I hope you all have a fabulous week!