Home Real Housewives of Atlanta News RHOA Recap: Sheree and Drew Butt Heads Over Fatum and Kenya Loses Her Cool on Sanya, Plus Kandi and Todd Argue Over Estate Planning

RHOA Recap: Sheree and Drew Butt Heads Over Fatum and Kenya Loses Her Cool on Sanya, Plus Kandi and Todd Argue Over Estate Planning 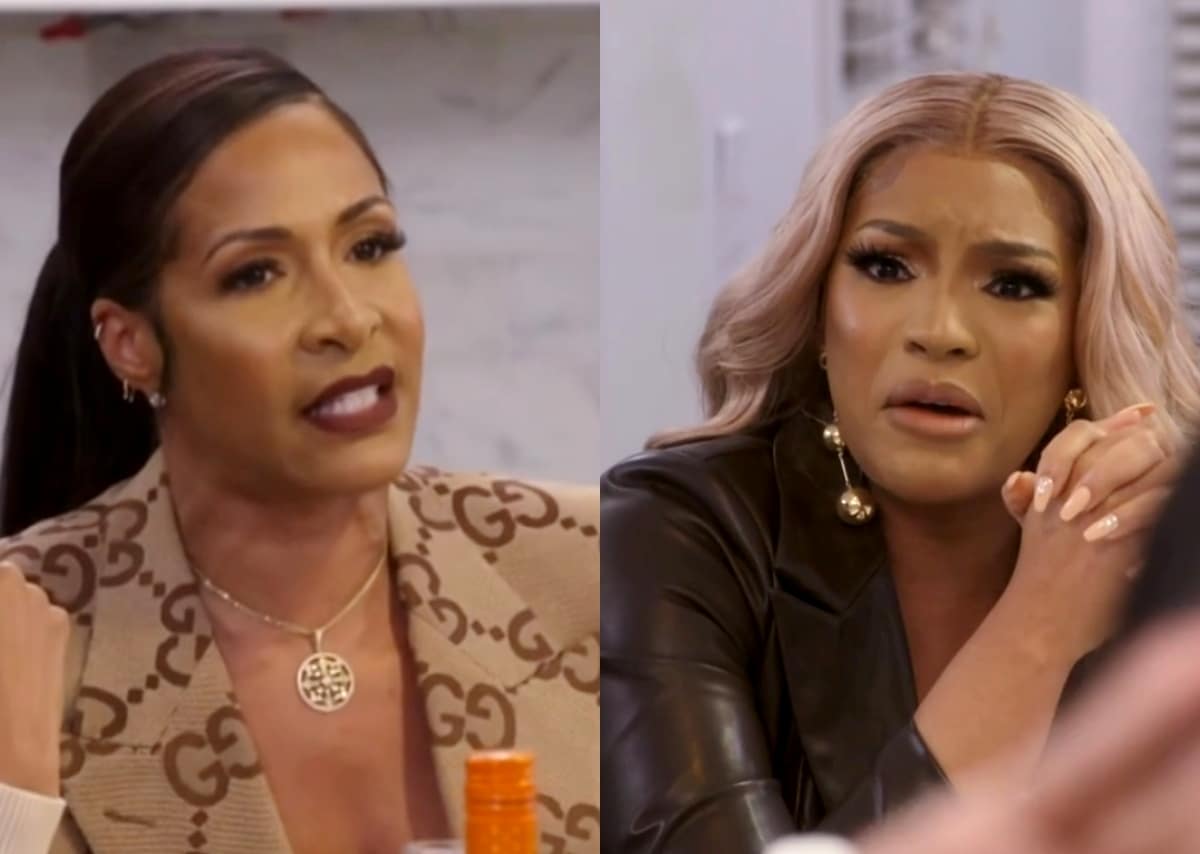 We are back this week for another snoozer of the Real Housewives of Atlanta! The episode is titled “Trust Planning Issues,” and boy do we have trust issues to unpack! Will the very handsome Dr. Tart help Marlo reunite with her nephews? Throw me a bone, or even better, an edible, and let us watch!

Sheree is chatting with her handsome son, Kairo. He is making music now, and he is a perfect model for her collection — if she ever creates it. Sheree is allegedly putting her designs on paper, and I recall a previous season where she already did that. I do not think I can recall another housewife other than Sonja Morgan (toaster oven) that has not taken advantage of having this platform to launch their products.

Kandi and Todd are having a birthday party for Ace, and she has invited Drew and Kenya to bring their kids. Ace is just such a cutie, and how precious is his excitement over his birthday party? He gets a gaming truck, which is a cool thing to have for his birthday party. Kandi then shares that her play had to be shut down due to COVID. Now that is a shame since it seemed like she could have had a real hit with that one too. Kandi gets emotional in her ITM when she describes what this project meant to her. She wanted to even the playing field for African Americans who would like to make it on Broadway. You must give it to Kandi — she really is a boss lady and does like to empower her community.

Marlo and Sheree are chatting at Le’Archive, which is basically Marlo’s closet. She lets her know what is going on with Michael and William. The boys are missing her and want to come home. Sanya then joins the ladies, and they chat about the discord among the group. She does not want the Blue Ridge nonsense to follow them to Jamaica.

Sanya calls Kenya to invite her to a prelude party to their Jamaica trip. Kenya cannot listen to Sanya repeating this is a couples’ trip, and she abruptly hangs up on her. Sanya should have just said, “It is you and a plus one.” She did not have to call it a couples’ trip since that suggests something different. Kenya feels like Sanya is purposely singling her out since she knows she is not dating anyone.

Marlo visits a Christian Psychologist to discuss what is going on with the boys. She tells the very handsome Dr. Tart that she threw the boys out since she got frustrated with them. Marlo admits she has not been consistent with the boys. She is afraid that she will fail them, and she cannot manage losing this battle. Dr. Tart agrees to see the boys and Marlo together to discuss their issues. Did you all catch how she hugged him a little too long? Was she checking for his wallet?

Kandi and Todd are chatting with Kaela and Riley, who are both doing well in NYC. They are getting their family trust documents finalized. Kandi’s asset list is considerably longer, of course, which Mama Joyce likes to remind Todd. They do have a few things that they own jointly. Todd wants to give out sums of money at certain ages instead of a lump sum. Riley is not liking this idea at all since she clearly has an open line of credit with her mom. She is afraid that Todd will be tougher to get money out of than Kandi. Riley does not want to move out of that expensive place where Kandi is now footing the bill. I am extremely impressed with Kaela, who has managed to take care of herself while living in that expensive city.

Kandi thinks Todd sees his mission as a parent as creating a teaching moment. Todd is proud of Kaela, who pays her own way, while Riley has a prepaid high rise in the city. He is offended that everyone is being disrespectful. Todd calls them ungrateful kids when he storms off, and you know what, I am siding with Todd on this one since he is trying to teach them responsibility.

Sheree is visiting a fabric store to look for fabric for her imaginary product line. She is planning a fashion launch and needs to purchase a lot of fabric to create her designs. Men have been asking for a VPL (visible print line) in their joggers. Now, Sheree, I would like to know, who are these men? Did Tyrone give you this idea while in prison? Sheree purports that she is revamping her line, and this time, she will make it happen. Side note: I do not think that I would want my son to model something that “advertises” his package. Just saying.

Kandi and Todd are discussing what happened when they talked about the trust. Todd is annoyed at the girls — especially Riley, who feels so entitled. Kandi is more willing to open her bag and give out more coins. She is still reeling over losing the play, but she was approached by another producer to see if she would be interested in producing another show. Todd is encouraging her to keep moving forward. Kandi feels like Todd is the perfect partner to encourage her. Todd jokingly says that, if it fails, it will just be more money that the kids cannot fight over.

Sanya decides to invite all the ladies over to celebrate Sheree’s birthday. Marlo looks ridiculous with her pointed shoulder pads, and it looks like she stuck a curtain rod knob under her blouse. Drew, with her mellow yellow tone due to all her bronzing, claims it took a while to get there. She outs Sanya by letting us know that she does not live in Atlanta. Kenya prances around the house and critiques her décor. Sanya decides to address the hanging-up issue. Kenya tells Sanya that her tone was very condescending. Sanya apologizes if she upset her, and she did not mean to offend.

Sheree arrives looking glamorous, and she looks astonished that they are acknowledging her birthday. She is touched by Sanya’s thoughtfulness, but then she sees that the party is severely lacking. Sheree is concerned that there is no white meat, alcohol, or a working photo booth. Kenya shames the dry food, and the only wine they have has screw-on tops. There is no shame in twist-top wine bottles!

Kandi asks if Drew packed her bones for their get-together. Drew pretends that she is always ready to throw a bone. She claims Sheree throws rocks and does not show her hands. Sheree pretends to throw tomatoes to attention-hungry Drew. She hilariously asks who she is talking to at this point with all her aliases. Drew suggests that Sheree’s age makes her forgetful, and that is some crap since Sheree does look fabulous. In her ITM, Marlo says Sheree looks good for 60, and a producer must let her know that she is 52. She is going to have to answer to Sheree for that one!

We finally get to the birthday portion of this poorly-thrown event, and Drew refuses to sing happy birthday to Sheree at first. Drew then decides to show off her talent, and she sings to Sheree. Sanya then takes the floor and becomes a total buzzkill when she tells them there are rules for the Jamaica trip. Excuse me, that is why I personally love going there since everyone is easy-breezy and down to party.

Sanya then tells the ladies they must pack their water-friendly hair. There will be no stand-offs and no props to attack each other with. Now, the real kicker is there will be no weed in Jamaica since she is not bailing anyone out of jail. Well, that just took the wind out of my sails hearing that after being there several times and getting high by contact in public places. I still have hope that this trip will liven up this dreadful season of RHOA. See you all next week in the Caribbean, and have a productive week!