Home Real Housewives of Atlanta News RHOA Recap: Marlo Claims Todd Badmouthed Kandi Before They Dated and Says Kandi’s Only Known in Atlanta as Kandi Fires Back Amid Heated Fight in Jamaica

RHOA Recap: Marlo Claims Todd Badmouthed Kandi Before They Dated and Says Kandi’s Only Known in Atlanta as Kandi Fires Back Amid Heated Fight in Jamaica 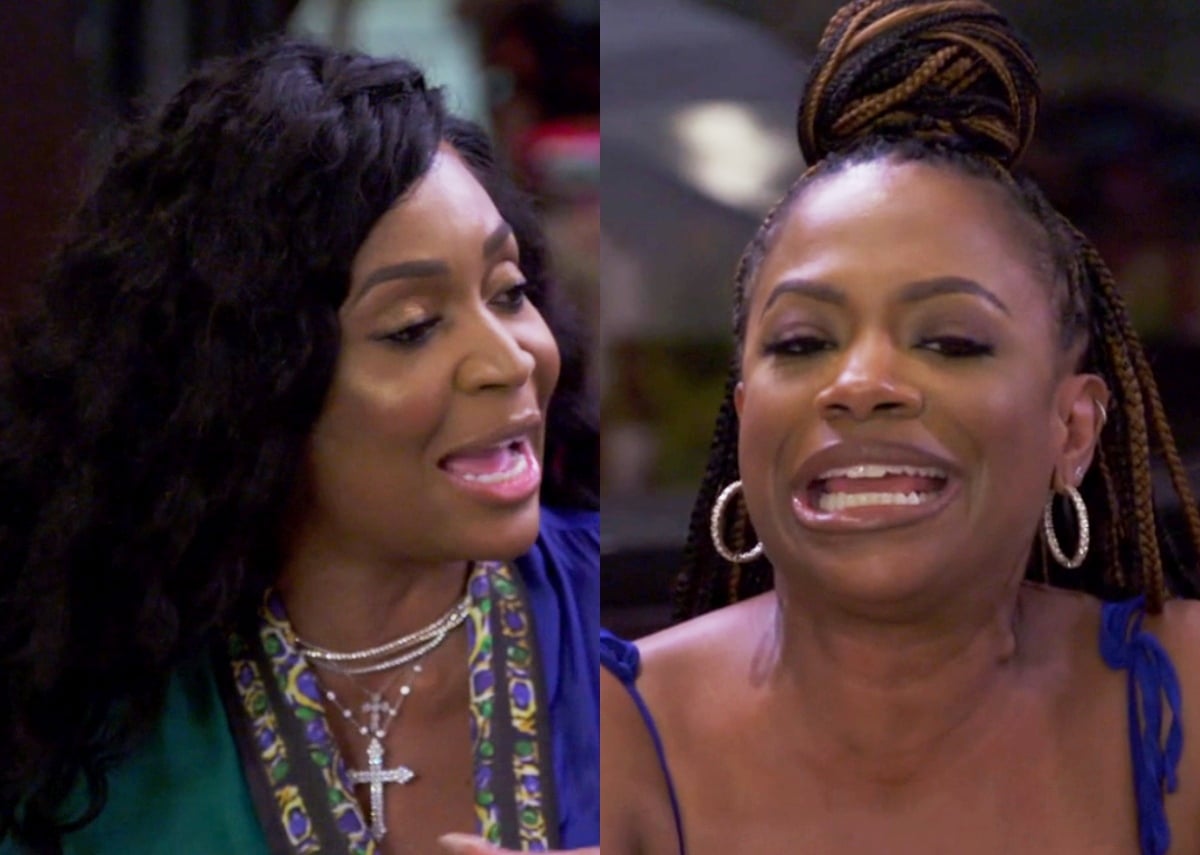 This week on the Real Housewives of Atlanta, Kandi Burruss has clocked in and is trying valiantly to pluck a sour peach because the RHOA peach tea has been tasting foul with Marlo going as far as to claim that Todd used to badmouth Kandi before he started dating her. More on that below. Will Kandi be able to resume her role as the ATL conductor and get our RHOA train back on the tracks? Let us watch and see, shall we?

Marlo is chatting with her “assistants” about the boys finally coming back home. She says her sister Crystal is glad to see them go back to her, and rightfully so. I cannot imagine how she was managing this plus her own four kids.

Kenya is packing for her Jamaica trip and throwing in some animal-themed options. Drew, who looks foolish with her eyelash tape, calls Kenya, and they chat about the “rules” for the trip. Kenya and Drew are shading Sanya’s party planning since food should not taste like ashy feet. How would Kenya know what ashy feet tastes like? Kenya then asks Drew if she and Sanya are in a good place. Why do all of the Housewives from all of the franchises use that term? Kenya tells Drew that her cousin that was going to be her plus one is not feeling well. She is going to stay longer in Jamaica and celebrate her birthday.

Sanya and the very debonair Ross are working out with her brother-in-law/trainer. They are preparing to shoot their iFIT series. Little Deuce, who is sporting some adorable dimples, gets into the fitness mood and completes some push-ups. Sanya’s body is hardcore, and you can tell that woman has some serious commitment to staying in shape. Ross mentions Jamaica, and he is going to do some activities with the guys to stay away from the girls’ drama. Now you all know why I love Ross, besides the obvious — he understands the show better than his wife does.

We are now at the Pittman residence, and Ralph is putting on the AC because he thinks Drew’s wig will lift due to high humidity. Ralph then questions Drew about her hair since it is obvious she has been hair challenged in the past. Drew wants Ralph to share with the others that he is drafting a book about step-parenting. Ralph spoke with Josiah’s dad, and he is now not going to adopt him. He has his publisher Audrey come over to meet his wife since he had an unpleasant experience over the assistant before, and he pretends that he wants to be transparent this time around. Drew resents being excluded from the process of authoring this book. Ralph wants Drew to write the foreword, but she is not willing to write about something she knows nothing about. He is unbelievably insensitive to his wife’s feelings about the adoption of her son, and his misogyny is on another level in this scene.

Sanya has planned to pick up everyone in a sprinter van, but Ross forgot his passport. Marlo brings Adrian, who is her florist. Times during COVID are tough for Marlo — she must be having supply chain issues for “marks” due to the COVID protocols for the elderly. Kenya shares that she is traveling solo, and you know that will be an issue. I am so jealous they are going to Jamaica, so I will have to live vicariously through them. Kandi and Todd are already at the airport to join the crew. Ross thankfully makes it in time since I need to make sure their fitness routine is working for him 😊.

Sanya is not buying that Kenya’s guest was sick. She pushes forward and asks everyone to introduce their plus ones. Kandi finds it amusing that Marlo never brings the “sponsors” who support her, and I LOVED her word choice! Sanya is a popular person in Jamaica and has needed security in the past. She is very proud of where she comes from and it shows. They stay at the Ocean Eden Bay, which has picturesque ocean views — and they all get suites. Todd, who is being hardcore about not drinking on this trip, foregoes the Bob Marley drink, which looks delicious!

While traveling to their rooms on a golf cart, Kenya and Sanya spot a handsome guy at the pool, and they chat him up. They invite John to help Kenya get her groove on — or at least get half a groove on. Kandi is getting hangry in the other golf cart. I love that about her since I am always looking for my next meal and cocktail too. Sanya and Ross have a great suite with killer views. Sheree asks to use their bathroom, and Marlo is making a big deal of her stinking up the room. She is annoyed that Marlo is shading her when she has polluted her air in the past. Sheree looks disturbed remembering the foul stench that she has been subjected to by Marlo. I gag just thinking of it.

Sanya is trying to make it up to them for the last party. She mentions that she is giving good rooms to those who are on her good side. Kenya is already getting texted by John, and things are looking up. Kenya’s room is decorated for her birthday honeymoon, and Sanya again has gotten the party vibe wrong. John, who is from England, comes to Kenya’s room, and she is giddy around him. Kenya claims that she is a good picker, but production super shadily reminds us of her terrible dating history.

Sanya, Ross, Drew, and Ralph meet up first for dinner. Drew is happy that she did not get shortchanged on her hotel room. Kenya brings her date, John, to dinner with the crew. She must not really want to keep him around to subject him to this level of scrutiny. Sheree likes this Kenya since she is all giggly having a man around.

Ralph shares what is happening with his book with the group. Marlo inquires about Ralph adopting Josiah. Ralph does not want to break his biological dad’s heart — but what about his wife? Kandi tries to stop hypocritical Marlo from asking questions about this since she gave up her nephews. See, I told you that Kandi woke up this episode, and she has decided to shut Marlo down finally.

Marlo tells Kandi that Mama Joyce comes before Todd, and everyone knows it. She tells Kandi to mind her own business about her nephews. Marlo then goes in deeper and tells Kandi she allows her man to be belittled by her mother. She really has her buttons pushed over the boys, and she is gunning for Kandi now.

Kandi is furious that Marlo is disrespecting her husband. She mentions all the other children that she has helped in the past and continues to. Todd then serves Marlo some reality peach tea and reminds her that she “bought” her way into this circle, and he knows this because he used to work in production. Marlo then desperately tells Kandi that she is only known in Atlanta and is not worldwide like Marlo’s wandering peach.

Marlo wasn’t done yet as she then claimed Todd badmouthed Kandi to her before he began dating Kandi. Yes, she seriously went there. According to Marlo, Todd wasn’t impressed with Kandi back then, and thought Kandi was a country bumpkin. Kandi’s reaction to the news was quite awesome as she simply couldn’t care less, citing that Todd married this country bumpkin after all. Todd of course denied Marlo’s claims.

John finally skulks away from the table after witnessing this scene. Sanya asks everyone to calm down and tries valiantly to gain control of the vacation. She should have whipped out one of her gold medals and given the MVP award of the night to Kandi. Phew, all I can say is it’s about time that this season is picking up, and Kandi has come out to play!

Next week, we visit the stadium where Sanya ran, and Ross stands up for his wife Sanya. Be well, Blurbers, and have a wonderful week!