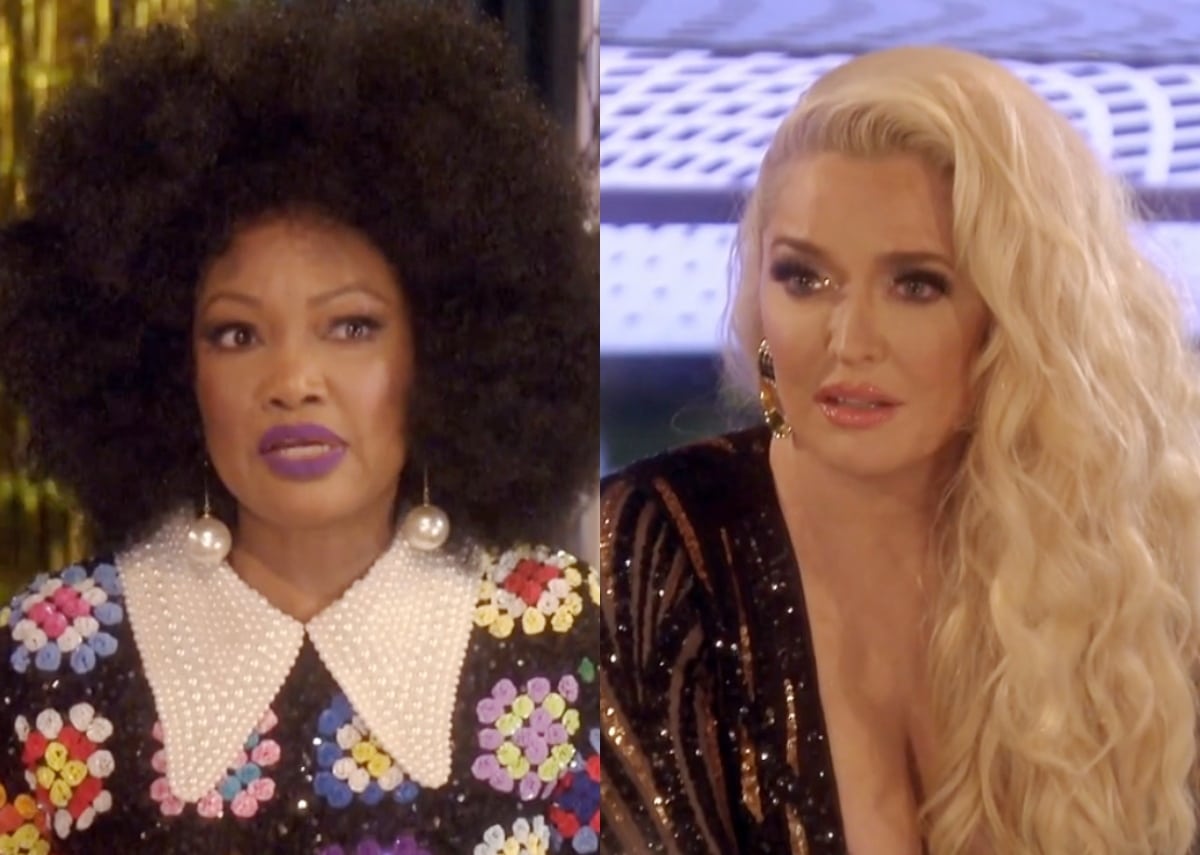 On this episode of the Real Housewives of Beverly Hills, Crystal addresses her eating disorder with the group and Sutton spills some legal news, which begs Erika to wonder, just who IS the true “liability” in the group?

After the serenade by Melissa Etheridge, Rinna has managed to get the attention of the entire group as she sniffles and attempts to squeeze a few tears from her eyes. Although Rinna wouldn’t mind talking about herself, er, I mean the passing of her mother, for the rest of the evening, Dorit takes control and directs the attention on Kyle as they prepare to sing happy birthday to her. How quickly Rinna can wipe away the tears to cheer on Kyle.

Rinna thanks all of the women for being there for her but claims that certain things… or people… set her off. Rinna believes that there are other issues going on within the group that are deeper, and once this conversation comes up, they sort of excuse the “outside” guests. Crystal takes this moment to address her eating disorder, and she tells the women that she has been dealing with this since she was 13. Crystal says that she is “on the journey,” and she addresses the ladies directly since they all have spoken about Crystal’s situation without her being present.

Sutton jumps to discuss being called a “friend with liability” by Erika. Sutton begins to tell a story about an actual friend with liabilities and comes out to say she got a letter from an attorney who is involved in a lawsuit with the Girardis. BOMBSHELL. Sutton goes on to explain that it’s not a subpoena because she hired a litigator to handle the questions, but Erika is seething. Erika claims she knows the reason why Sutton is getting dragged in, and Sutton states, “What I learned is that Erika has a lot of lawsuits in front of her, and to that point,” Erika is the liability, not Sutton. Boom.

Erika is annoyed that Sutton didn’t stop talking when Erika warned her to be quiet, but Garcelle reminds the group that Sutton wasn’t the only one questioning Erika’s legal issues. Suddenly Diana makes the chat focus on Garcelle. She calls Garcelle the “most guarded” and feels like she needs to work extra hard for their friendship. Diana has made little effort to get to know Garcelle, and Garcelle suggests that Diana “Google” her if she wants to get to know her. Rinna butts in and asks Garcelle if she “actually hears” Diana, and Garcelle does not appreciate that. Rinna believes that Garcelle has fear and that makes her defensive. Rinna talks about coming from “love” (LOL) after just screaming at Sutton, and Garcelle is infuriated that she never feels supported by the group. So, essentially, nothing gets settled.

Crystal catches up with her husband, and they recap the night before. Crystal addresses how the ladies question her eating disorder, and she doesn’t want a timeline pushed on her by the group. She gets upset and doesn’t want to answer to them, and her husband advises Crystal to seek help just for herself.

Kathy walks in right after the emotional moment and tells Crystal that she believes the girls are coming from a good place. She lets Crystal know that she is allowed to handle her issues her own way, and then, in true Kathy fashion, blurts out, “Do you have a cracker? Just something to nibble on.” In her defense, it is odd that a hostess does not offer her guest something… anything!!

It’s Kyle’s birthday, and her daughters don matching leopard jammies with their mother. Kyle’s daughter gifts her a pair of fresh new roller skates, and her future son-in-law bears a bouquet of roses the size of the state of California. Kyle begins to talk about wedding planning with her daughter, Farrah, and I just hope RHOBH airs that event!

Erika and Rinna visit a restaurant and catch up. Rinna brags about shooting for People magazine’s couple issue and tells Erika she is doing better overall, although she did not expect to have that breakdown at Dorit’s. She believes that Sutton is her trigger and wonders why Sutton needed to share that legal info about Erika in the midst of the fight. Both ladies say they actually like Sutton, but she is her own worst enemy.

In other news, Rinna is excited for her Rinna Beauty Launch, round II (lip plumper anyone?)… and she reminds the viewers that because there is a THEME this time, the event is “a little bit uplifted, but it’s the same f*cking people.” At least she hears how ridiculous she sounds…

Sutton meets up with Kyle, and she still won’t drop Erika calling her a liability. Sutton feels as though it is hypocritical of Erika to say that, considering all of her legal woes. Sutton explains that she was sent a letter where she would be called as a third-party witness, but Sutton won’t go into detail about which case it is. Sutton is most annoyed with the fact that it seems like everyone blindly defends Erika.

The subject changes to Sutton’s dating life, and Kyle gives advice to look “semi-poor” on a date. Sutton scoffs and realizes, “I’m difficult. I like to debate and I like to be right.” These traits might explain why things have never worked out with Erika, huh?

It’s the night of the Rinna Beauty party, and Harry Hamlin is not there. Interesting… The ladies are decked in Studio 54 gear and everyone is ready to get down. Garcelle talks about how she is normally not a theme person, but this one hit close to home since she remembers modeling in the ‘80s and ALL that comes with it.

Since all the women are at the party, Kyle invites them to Aspen. She explains that her house is “small,” but some ladies can stay at a nearby house. It seems like all is well within the group for a moment, but then Stir-the-Pot-Kyle gets involved. She asks Sutton how she is doing, and when Sutton says she STILL doesn’t understand why Erika called her a liability, Kyle blurts out, “Why don’t you ask her? Erika?”

Erika jumps right in and calls Sutton a “hindrance” to the rest of the group. Garcelle reminds Erika that she can’t treat her friend, Sutton, badly, and then expect to be friends with Garcelle. It just doesn’t work like that. Rinna calls Sutton mean and tells Sutton to “have your own f*cking back.”

In the meantime, Rinna still has very strong opinions about Sutton, yet she is the one who keeps saying she forgives Sutton. A little fishy. Rinna believes that she is trying to make things better with Sutton, but I don’t know if that’s true. Rinna is using her grief as a crutch and Sutton likens herself to a baby colt. As Sutton rambles on and on, Erika interjects and says, “And I have a drinking problem. Well, we can get to that one later, ma’am.” Her gaze falls right on Garcelle.

Garcelle explains that Erika has been out of control, to which Erika corrects her: It was merely three times when she was messy. She does not appreciate Garcelle pushing a “false narrative,” but just because Erika “doesn’t like it, doesn’t mean it’s false.” Erika tells Garcelle if she would have a problem, Garcelle would be the last to know. She believes that Garcelle went to different people in the group to discuss Erika’s drinking and does not like how Garcelle is going out of her way to make Erika look bad.

To this, Garcelle retorts, “Erika, I don’t have to make you look bad, you can do that on your own.” Erika believes that Garcelle has an ulterior motive, but Garcelle shrugs it off: “Blow off your life, it’s your prerogative.” Kathy wants the women to lift each other up, and so Sutton tells Erika she is going to call her tomorrow. To that, Erika says, “Please don’t.”  Woof. Things are NOT at all good, but let’s go to Aspen, shall we?