Last month, Real Housewives of Salt Lake City’s Jen Shah pleaded guilty to conspiracy to commit wire fraud in relation to a telemarketing scheme. Now, the star reportedly faces 11 to 14 years behind bars and must pay up to $9.5 million in restitution.

The plea deal angered many fans, who slammed Jen as a liar (after she repeatedly claimed her innocence both on the show and in interviews). Thus far, Jen has not spoken publicly about her decision, though her attorney released an apology statement.

Now, Jen recently took to Instagram to share a telling quote from Adam Grant. In light of recent events, the message seems to be directed at her critics.

“Being judgmental,” says the quote, “is not about how quickly you form opinions.”

“It’s how certain you are of them. Strong convictions from weak info reflect arrogance. Holding views lightly and revising them rapidly reveals humility.”

The post concluded with the line, “Wisdom often ends in a question mark, not an exclamation point.” 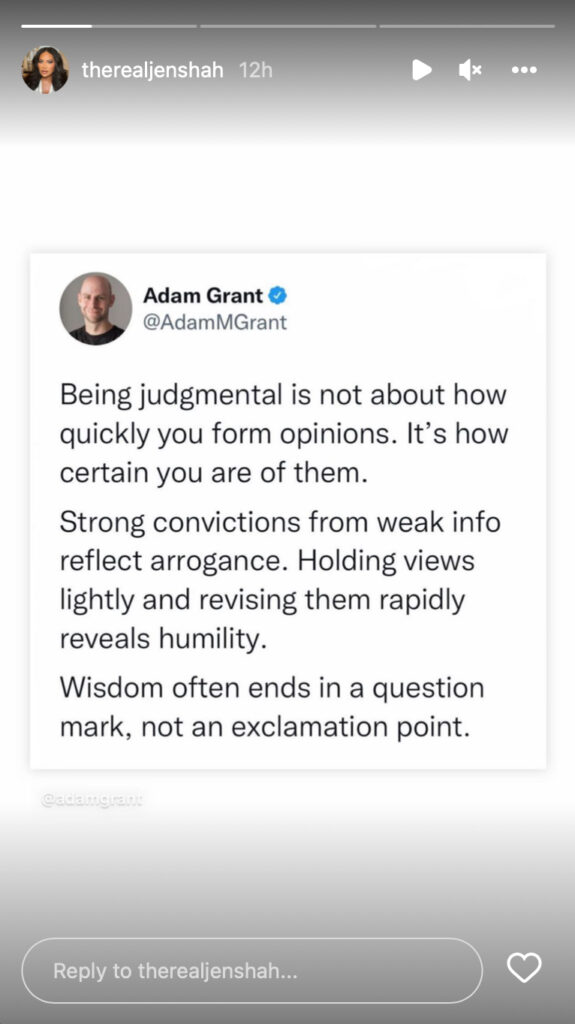 Fans, of course, have many question marks when it comes to Jen. What was her intention in sharing a quote about “weak info?” Is there more to the story than meets the eye?

Many viewers believe Jen is placing blame on others rather than owning her mistakes. Due to the plea bargain, however, she may be legally bound from talking about it – directly, at least.