Home Real Housewives of Beverly Hills News RHOBH Recap: Diana Calls Sutton a C*nt and Accuses Her of Shaming Her After Miscarriage, Plus Kyle Confronts Garcelle for Unfollowing Erika

RHOBH Recap: Diana Calls Sutton a C*nt and Accuses Her of Shaming Her After Miscarriage, Plus Kyle Confronts Garcelle for Unfollowing Erika 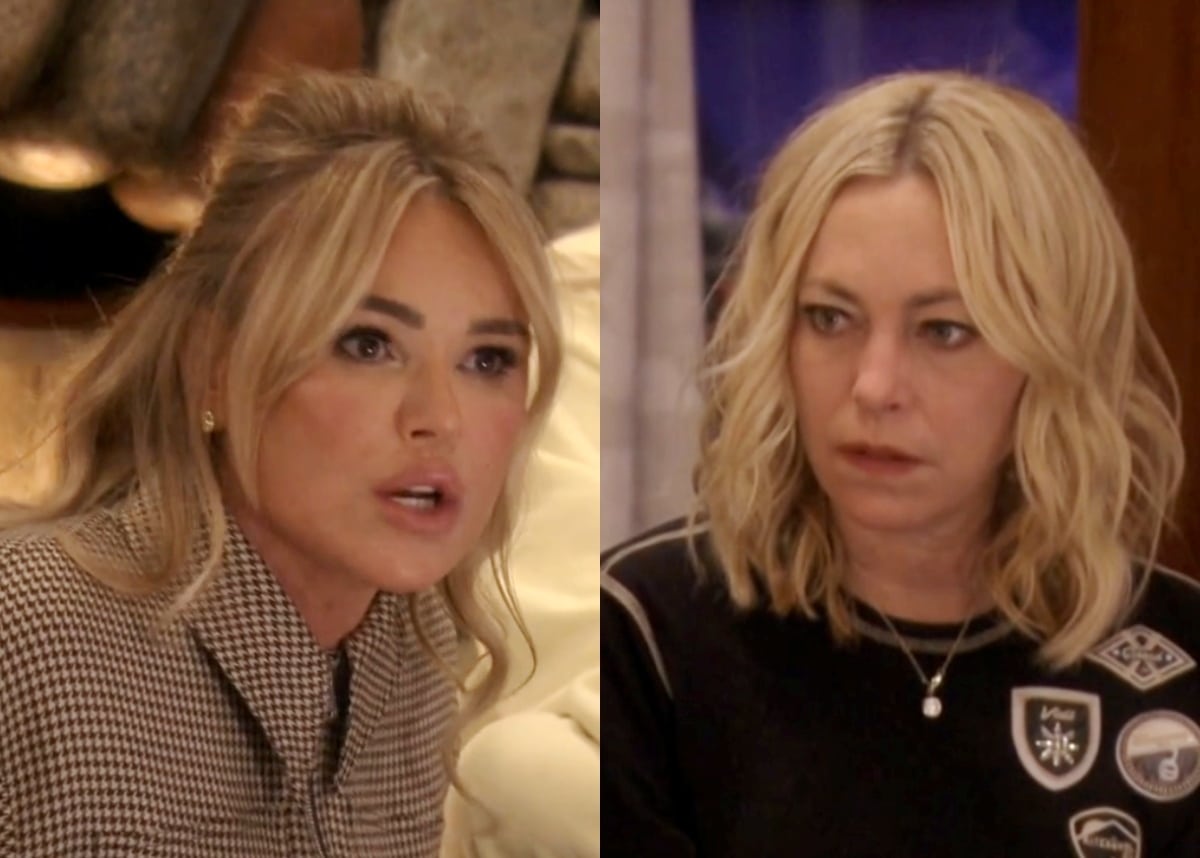 The Aspen trip kicks off on this episode of the Real Housewives of Beverly Hills. Kyle claims you can’t NOT be happy while in Aspen, but these women have a different agenda. Things continue to spiral and circle back to past issues, leaving Sutton wondering if this group will ever be able to move on.

Dorit and Kyle, in their matching perms from the night before, discuss the disco party. They are hungover and wishing that they did not continue to party and be “over-served.” Dorit believes that Rinna is having extreme reactions (I’ll say!!), and she feels like her emotions have built up so much, proving that she has not dealt with the death of her mother. Rinna’s all over the place, but Kyle feels like Sutton, especially, must give Rinna all the time she needs to get her emotions in check. According to Kyle, Sutton “says too much and sometimes she makes it a little difficult.”

Garcelle greets Diana with a “Bosnia!” yell before letting Diana into her home. Diana’s jumpsuit is on backward, which is incredible considering she has a TEAM of people helping her get ready on the reg. Garcelle and Diana also talk about the disco party, and Diana proclaims, “I think I’m gonna leave the country” after posting some pretty mortifying pictures of Kyle and Kathy.

Diana explains that she is backing away from Sutton to “see how she really is,” and Garcelle is really trying to see if there is a soft side to Diana. Regarding the upcoming Aspen trip, Diana states that it is for the best that she stays at a hotel because she “sends in Ghostbusters to cleanse the energy.” Stop it right now! Love that Garcelle calls Diana a straight-up nut job and doesn’t even try to hide the fact that it’s weird AF.

We get a glimpse inside Rinna’s house for once as she unpacks her late mother’s belongings with her husband, Harry Hamlin. They stumble across a book about the man who almost murdered her mom years back, and Rinna can barely look at the pages. Rinna is claiming she must just “feel” her emotions… or just freak out on all of her friends after a few draaanks. Either one…

Kyle and Mauricio are busy in their own backyard doing some putting practice. Ah, to be rich. They discuss Aspen, and Mauricio confirms that the plane is set and ready to go. Mauricio invites himself to go on the girls’ trip, which is fascinating because who would really want to insert themselves in this group? Kyle explains that her Aspen house is not that big, which is great because then she cannot have many guests. To be able to accommodate everyone, some of the women will be put up in a rental house… well, except for Diana, since she is going to be in a hotel (eye-roll). We also learn from Kyle that Garcelle and Sutton unfollowed Erika. Awkward. Mauricio predicts that this trip is going to be a doozy.

Dorit always stays with Kyle, but she has decided to take the high road and stay in the rental since all the ladies wanted to stay at Kyle’s. Dorit talks to PK about how she will be OK and is doing a lot of work to feel better after the home invasion. Dorit, much like Rinna, claims she wants to embrace the emotions to help her heal.  PK just hopes that Dorit won’t call him in the middle of the night to be picked up like she did while in Mexico…

With only two days before Aspen, Crystal is busy packing and hoping things go well on this trip, and Sutton is trying to shove a tin foil jacket into a small suitcase. In the meantime, Garcelle phones Sheree to touch base. Garcelle explains how she was hot about Erika at the disco party and how she wants nothing to do with Erika — “she could be on fire” and Garcelle would not help her. Fighting words, but that would certainly explain Garcelle’s unfollow for sure.

Crystal shares a new article about Erika with Garcelle. Apparently, Erika is refusing to hand over $750,000 earrings that were paid for by Tom Giradi’s company. Crystal believes that Erika needs to give back those earrings, and although this information is very public, she worries if this information could affect Erika. Things could get even more awkward, though, because Garcelle actually has to report the story for The Real. Luckily, the episode won’t air until after the Aspen trip.

Erika is filling us in on how ritzy Aspen is… how she flew there on her own plane a million times. Sigh. While on the (very cramped) plane to Aspen, Kyle gives a run-down of what events are planned, and she explains that it is “impossible” not to be happy in Aspen. Sounds like foreshadowing if I ever heard it.

I have a feeling that the most well-behaved on this trip is gonna be Kyle’s dog, Smokey. Van number one roles up to Kyle’s house while van number two arrives at THE Aspen house. Crystal, Garcelle, Sheree, and Dorit are living the high life, and it is very clear that Dorit wasn’t doing anyone favors by “volunteering” to stay in the rental. The girl made the right choice. I mean, a chef-made snack, orrr Kyle’s charcuterie board thrown together as Mauricio barrels in with some booze. You pick!

Kathy finally arrives in her slippers straight from the airport while Diana literally is getting dressed by one of her stylists to SIT IN KYLE’S HOUSE. Mauricio starts cooking ala Harry Hamlin as the ladies all come back together. Kathy is a helluva house guest (not sure I would call her high maintenance, Kyle — she IS sleeping in a bunkbed…), but Kyle is just happy to have mended her relationship with her sister, so she will take it.

After dinner, Rinna pulls out an Ouija board that she found in her room, and the ladies recoil. Rinna and Erika place their hands on it, and Kyle asks if all the ladies will be able to work out their issues on this trip. When that didn’t get a big enough rise out of everyone, Kyle tries again: “Why did Garcelle unfollow Erika on Instagram?” Oh, Kyle. Here is your spoon. You are the biggest pot stirrer!!!

Garcelle explains she did so because Erika called her a liar, and Kathy agrees. “Liar, thief, and pedophile” are the three things that anger her. Garcelle reminds Erika that they do not have to be friends, and it is clear that Garcelle is done with this conversation. Even Dorit can’t figure out why Kyle is working so hard to make a fight happen. Kathy tells the group that “no one is that important” to be worrying about Instagram followers, but this causes Kyle to raise her voice and lose it. Kyle claims she wants more honesty in the group (or everyone to agree with her), and Garcelle and Sutton didn’t unfollow because it was a joke, but rather because they were mad.

All of this fighting makes these women sound like middle schoolers. Who cares about Instagram that much?! Sutton reminds everyone that Erika called her a c*nt, but when Sutton unfollows her from Instagram, they have a problem with that. Sutton further states that she hadn’t heard one thing from the ladies about Erika calling Sutton a c*nt, and from the sidelines, Diana blurts out, “But you are one.” Of course, Erika shrieks because she thinks it is hilarious, but really, why is Diana inserting herself?

Diana lip licks through her cackling and says, “Not everybody can be best friends.” Diana wonders how Garcelle can be friends with Sutton, and she talks about Sutton as if she is not there. Diana questions if Sutton HAS feelings and continues to remind everyone that Sutton comes after people when they are at their weakest.

Love how Kyle tells Sutton she can “speak up and defend” herself after Kyle was the one that started it all. Sutton remains silent as Diana berates her and claims that Sutton knew exactly what she was doing when she was “hurting” Diana. The thing is, Sutton has apologized a million times to Diana!! Garcelle is beyond confused since Diana left her house saying she was going to give Sutton a chance. Kyle believes it is hard to speak your mind in this group and respects Diana’s honesty (ouch). And Sutton, well she just sits there in shock until Diana flees, and only then does she break down in tears. Great start to this trip!