RHOA Reunion Part 1 Recap: Marlo Opens Up About Traumatic Childhood and Sheree Accuses Kandi of Using Her for Clickbait, Plus Real Reason for Tyrone Split 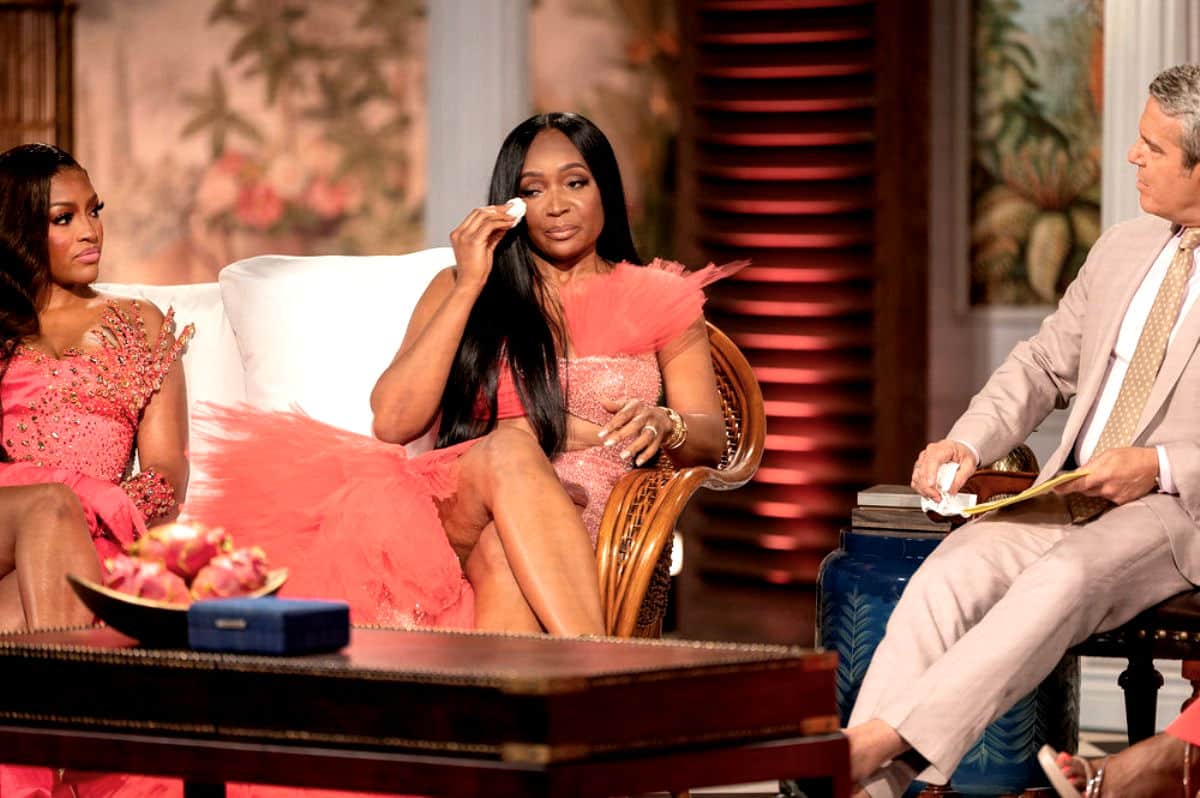 Let’s reunite with our Real Housewives of Atlanta peaches and find out who will be held accountable for this rotten season. They are shooting the reunion in NYC with a moat so no one will be able to escape the peach pits that will be tossed. Let us watch whose peaches get juiced, shall we?

Andy must first congratulate Sheree on finally having a fashion show with fashions. Let me first make some comments on the ladies’ fashion. They are all dressed in hues of peach. Kenya looks beautiful, and she picked a flattering dress and her hair is on point. Marlo looks like she is trying to look like a flamenco dancer with a bird stuck on her shoulder, and she is proudly perched… next to Andy? Sanya disappoints me since she has a hardcore body, and the dress does not do her any justice. She looks like she is wearing two different dresses that have been sewn together. Drew looks pretty, and her dress is flattering to her shape. Sheree, who is sporting her Lady Godiva hair, and Kandi have both decided to put their boobies on parade, which cheapens their looks instead of looking sexy.

Andy goes into a whole segment on bone collecting. Sanya is allegedly the new bone collector in training. She does not want that title. Drew then gets her feathers ruffled when the barking Fatum is mentioned. Sheree pretends that she did not instruct her chihuahua Fatum to attack Drew and Ralph.

Sheree now gets profiled in the middle of this dispute. She must live through the humiliation that Tyrone caused her. Andy wants to know if he can shop on her site yet, and she claims that it will go live when the show’s finale airs. The other ladies praise her fashion show, and everyone seems sincere when they tell her they want her to win — finally.

Kandi gets called out on making fun of Sheree’s line. Sheree thinks she is good clickbait, but bless her heart, since she really lives in an alternate universe of delusion. Kandi adamantly denies using Sheree for clickbait and will just admit to throwing shade. Kenya defends Kandi and tells Sheree that she does support her. When Kandi’s podcast is brought up, Sheree gets called out about her shading Kandi in her ITMs.

Sheree calls Drew out on her Drop it With Drew program. She is proud that she has used squats not shots to make her body look good and only had her boobs done. Drew gives us some sob story that was so meandering that she never really made a point — other than she had a mommy makeover and her workout program cannot be credited for it. Sheree then gets called out for not paying her bills. She pays people who need to be paid. Sheree is evasive about who she pays, and she looks super shady in this scene. Kenya tries to get her to understand that if you have a contract and you are not satisfied with a service, it does not absolve you from paying. It is then suggested that Tyrone may have paid for Sheree’s house. Now I wish that they delved into that topic instead of the direction they went in.

Marlo mentions a call from Todd about a show idea when she was not able to be a housewife. Todd AND Kandi were willing to help her get a show on another network, and she mistook who was helping her when Todd called instead of Kandi. Kandi gets pissed that Marlo insinuates that she does not help people when they need help. She is fired up that Marlo is telling millions of people this drivel.

Andy asks Sheree why she practiced abstinence with Tyrone. He wants the deets, and Sheree finally admits that Tyrone did not satisfy her. Sheree admits that she felt he was using her for deals and being on TV. She gets a little coy about her new man Martel after dating him for a few months. Sheree claims he is different with her, and Kenya lets us all know that he cheated on his wife and got his mistress pregnant. It is mentioned that Martel is a very handsome man, but Sheree claims she is not into looks — since she married Bob after all!

Sanya then accuses Drew of being only good at mediocrity. She tells her that she is different on camera versus off. Sanya insists that Drew lied about what happened with the makeup artist. She then gets called out by Marlo for clout chasing. Sanya denies this since she did include Drew, who has a small number of followers. She is gunning for Drew this reunion in hopes that it will help her to hang onto her peach. Talk about going for the low-hanging fruit!

Drew shares that she is collaborating with a doctor to help her deal with Ralph’s gaslighting her communication issues. Sanya then starts bizarrely crying because Drew is not being real. Andy wants to know if their disagreements were a friendship breaker. Sheree even calls Drew out to be a liar, and Drew’s eyes shoot daggers at her. Thankfully, even Andy is bored with this exchange and changes the subject. Side note: Did you all catch the birds in the cage chattering so loudly when the ladies were talking, and then in the next scene, they were gone? Fun fact: Birds tend to chirp loudly when they crave freedom and when they sense an attack. Those birds flew the coop to escape the boring reunion and the impending doom of RHOA!

Marlo’s season now gets profiled, and her story is now told. She started the season being a good mauntie. Marlo shares that her mom was able to connect with the boys, but it did not last exceptionally long. She admits she still needs her mom, but her mom does not recognize that. Marlo gets emotional as she states how she would like to have a mom who stands by her.

Marlo then tells her story about running away from home at the age of 10. She lived in various foster homes. Andy asks about the circumstances that compelled her to leave, and Marlo shares that her parents were abusing drugs, and she was subjected to beatings by her mother.

Marlo mentions one home where a teacher was fostering her. She thought she found her forever home, but the woman’s daughter felt neglected with Marlo there. Marlo intimates that she was abused multiple times by being in the foster care system. She is so proud to be sharing a stage with a media mogul (Andy), Miss USA (Kenya), Grammy winner (Kandi), original OG (Sheree), track star (Sanya), and singer and actress (Drew). IMO, Marlo realizes she screwed up this season, and she is doing some major damage control by blowing smoke up everyone’s a*s and praising her castmates.

Kandi acknowledges that she knows it was important for Marlo to finally get her peach this season. She always wanted to be accepted and not be known only as an ex-con. Kenya even had a good relationship with her at one point, but then Marlo weaponized anything Kenya shared with her about Marc. She then says, “Let’s not do the Donald Trump here today because we all saw you talk about my husband on multiple occasions.” Marlo resents being called a whore and a prostitute, but she challenges them to walk in her shoes and experience sleeping on a mattress on a floor. She admits to having major daddy issues since she never had a positive role model for a mother or a father.

To sum up part one, I suspect Bravo is giving Marlo a huge platform to redeem herself after her disastrous season. Marlo is sitting next to Andy, and Kandi is on the far end of the other couch seated where the newbies or soon-to-be ex-housewives sit. Sheree has been given prime seating next to Andy, so I suspect she will return next season and share her new romance.

There were no surprise revelations in this episode, and I hope it picks up over the next two, or I will be flying the coop like the birds did! Be well, everyone, and see you next week for part two of the reunion!