RHOP Recap: Candiace Blasts Ashley Over Claims Chris Was Flirty With Friend, Plus Robyn Accuses Wendy of Lying About Fight 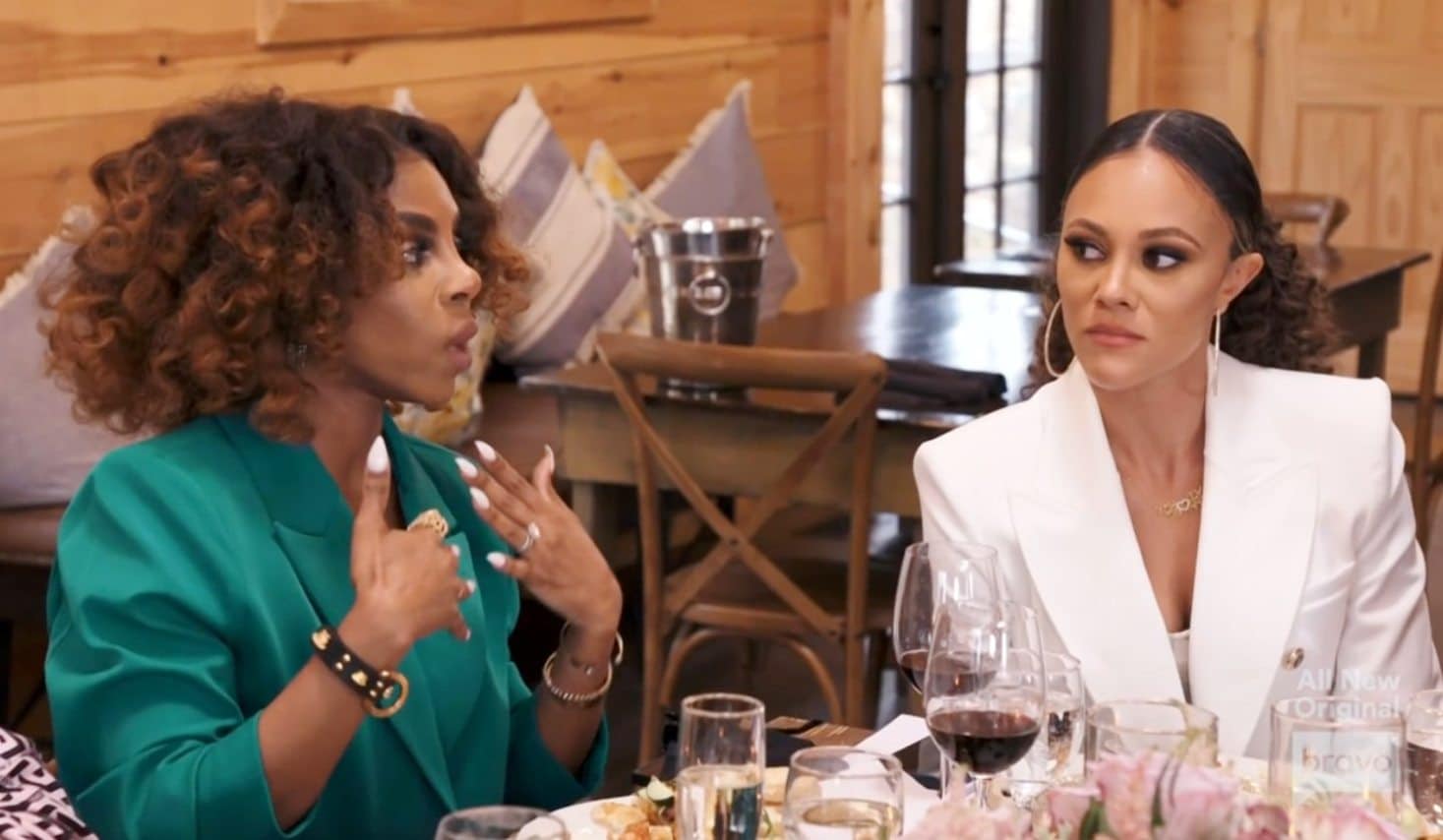 This week’s episode of the Real Housewives of Potomac is called “The Burn Session.” We have the fuel, aka alcohol, and some are bringing the heat, so you can be assured that there will be combustion reminiscent of season five’s explosive scene between Candiace and Monique. Take cover, and let us watch!

Ashley visits Candiace’s house for the first time. Candiace reminds us how she got cast on this show since these two were cute pageant queens. She used to like Ashley, but she is revolted by the Ashley who behaves like a ho. Ashley shares that Michael is in Vegas, and he just had a vasectomy. She mentions while separated that you can live in the same house, but you’re not able to sleep in the same bed or have sex. Ashley thinks Michael misses his control over her more than their relationship. She then pivots and backflips when Candiace wants to know more about the sleeping arrangements. Ashley is clearly still creeping under the bridge to sleep with the old dusty troll.

Candiace shares that she had to cancel her IVF procedure from all the stress. Chris does not want any part of being around this group of ladies, and frankly, I do not blame him. Candiace tells Ashley that Gizelle already sold her out about meeting a hockey player. Ashley compares everyone she meets to Michael, aka Slenderman, so is she suggesting her type is a creepypasta meme created on the internet? Candiace just wants Ashley to have a good set of nice, tight young balls. She then mentions how Karen has been canoodling with another man as well and how everyone knows it.

Mia and Gordon are having dinner outside, and she does not eat without a centerpiece, so they throw what looks like a bird’s nest on the table for décor. She does not want to open any more clinics after opening number 25. Mia claims her kids are running her ragged and her health is a question mark right now. Gordon then inquires about how Mia has been doing. Mia mentions that cancer has been ruled out, but she still has some lumps to be removed. She wants to invite the other ladies to Miami. Mia used to live there and apparently thrives on the antics of the dirty south. She proudly proclaims she had sex on the beach with Gordon, who was married, while a crowd of people watched. #proudmoment???

Gizelle takes Angel and Adore out for manicures. She is planning a sweet 16 party, and Jamal will be helping her plan this momentous occasion. Gizelle grosses her girls out — and me — when she wipes her shiny face with her footcloth. She then launches into a story of how she and Jamal have always been able to co-parent their girls and put their differences aside while church organ music is playing in the background. Side note: I can only picture Jamal doing dastardly deeds while that music is playing, and I can only think of his own ungodly needs.

Robyn is meeting with a family law lawyer to discuss her options. She tells her about their past marriage and how they lost their money on bad investments. The lawyer wants to know if there is a disparity in income now, and Robyn has a bit of a pregnant pause. Robyn wants her personal businesses to be excluded from any settlements. She claims her businesses are successful, and I am sorry, I do not get the novelty of her ball caps. Robyn wants to know if there are clauses for infidelity, and she admits there is a history of it. She does not want to be naïve about it this time and thinks Juan will not like signing the dotted line.

Ms. Karen, Ashley, and Wendy meet up to pick flowers at a tulip farm, and they are discussing Michael. Ashley still does not know who leaked her separation to the blogs. Karen tells Wendy that she is disappointed that Robyn was immature and did not invite her kids to family day. She wants them to put their differences aside, but Wendy wants Robyn to meet her halfway. Wendy admits she can be condescending, and she will send out a group text for everyone to be able to air their grievances.

Candiace chats with Chris and her sister about her new release and the song “Insecure.” A rapper called Trina is going to be featured in her new remix. Candiace then gets an invite from Wendy to a “burn session” where you can speak openly and be heard. Chris questions the intentions of those participating, and he exits the room quickly since he knows he will surely be roasted like a giant marshmallow at that session!

Wendy shares with Ashley that she is dealing with kidney stones. She then mentions her mom Susan was rushed to the hospital and it made her realize she needs to take care of herself. Wendy has sent a sprinter van to the other ladies to come to her burn session. She is having this get-together at a vineyard, and the ladies in the sprinter are already bitching. We then get flashbacks on what can go wrong when you meet at a winery when Monique and Candiace had their brawl.

Ashley tells the ladies that Michael is being more of a d*ck than usual and will not talk to her. Michael is being skewered and flayed like a giant d*ck kabob by the trolls on the internet. Ashley wants everyone to know she is not mad at him and does not like her husband being labeled a creep. Gizelle can relate to how this felt when Jamal was being burned at the stake when he committed countless acts of adultery.

Wendy then tells the group the process of this session. She tells them they can be positive in their comments. If you want to go negative, you write down your comments then share them and be willing to burn them so they will disintegrate. Ashley shares that Wendy used to have a barrier and she hopes she will be more open in the future. Candiace tells Wendy that she recognizes her wall. She thinks that Wendy needs to learn to trust. Karen admits that she and Wendy started on a rough note. She wishes her future growth and is optimistic. Mia tells Wendy she is dismissive and messy. She is proud of her hosting this and thinks Wendy is showing her accountability.

Robyn is fine to be “oil and water” with Wendy, and Gizelle agrees. Wendy owns the role she played in their relationship. She said Robyn was getting physical with her and attributes it to her drinking. Robyn will not accept being called a thug. Charrisse, who must be Robyn’s “phone a friend,” calls in, and she lies about having to hold Robyn back from Wendy. Production then rolls the tape, and we see Robyn go postal. Robyn then calls Wendy horrible and says she does not give a f*ck about her, and she stomps out to the sprinter van to vent to the driver. Gizelle finds Mia to be phony, and we then break out into a screaming match.

Wendy pretends that all she wanted to do was something therapeutic and let everyone deal with their emotions. Gizelle and Robyn get called out for making it ugly and are credited for bringing the evil spirit of the winery to the table. She is not willing to take advice from Wendy since she is not a therapist, but Wendy will go back to school to get that fifth degree.

Ashley then throws a Molotov cocktail at Candiace and tells her that Chris was also flirty with her friend at the spring party. Candiace wants to know why she did not tell her this when she came to her home, but Ashley acts like she just got this intel. She is furious that when Michael was behaving like a predator, she came to her privately and shared that information. Ashley says that Michael was cleared in the court of law where there is frankly lawlessness IMO. She then throws in that Chris was also eyeing Mia, but I attribute that to his curiosity about the “work” she has had done. Candiace now has her eyes open and is glaring at that “bulbous forehead b*tch” and wished she had just listened to her gut. Ashley then grabs her flamethrower by saying Chris has said far worse inappropriate things to other women…

Next week, this burning pile of nastiness will continue to smolder, and who will be willing to put the fire out for good? Have a fabulous week, and see you next week in Potomac!