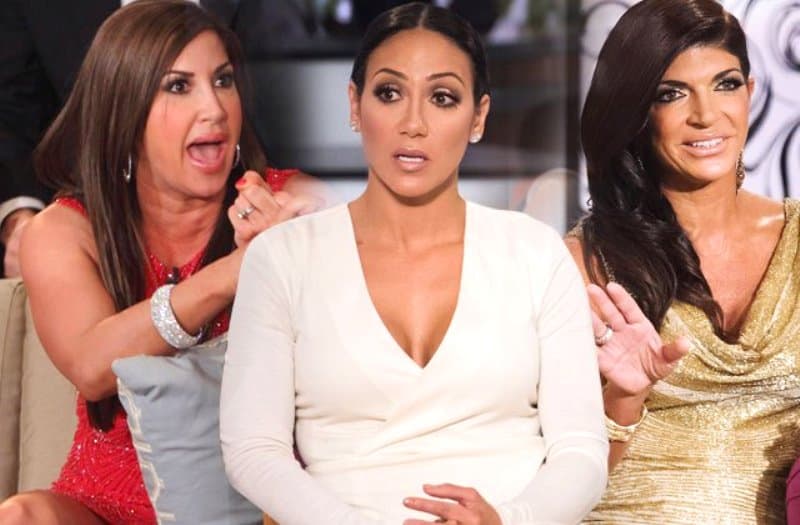 If there’s one thing we can all agree on when it comes to former Real Housewives of New Jersey star Jacqueline Laurita, it is that she is brutally honest to a fault! Thank you Jacqueline!

And during a recent Facebook Live session, the 47-yr-old Bravolebrity didn’t hold back when it came to dissing her former costars Teresa Giudice and Melissa Gorga!

When a fan accused her of not forgiving and forgetting when it came to her former costars, Jacqueline shockingly revealed that Melissa admitted to her that she only became her friend simply to get on the show! Yikes.

Jacqueline said on Facebook, “Wrong! Melissa told me she hated me the whole time and only friended me because she had to in order to be on the show. Teresa is the one who kept bringing up the past in REAL time! I just held her accountable for what she brought up.”

The fan then accused Jacqueline of attacking Teresa during their infamous sit-down on a previous season, but Jacqueline blamed editing for making it look that way.

She responded: “In real time is was her bringing up the past. You saw it edited.”

Screenshots of that exchange are below – 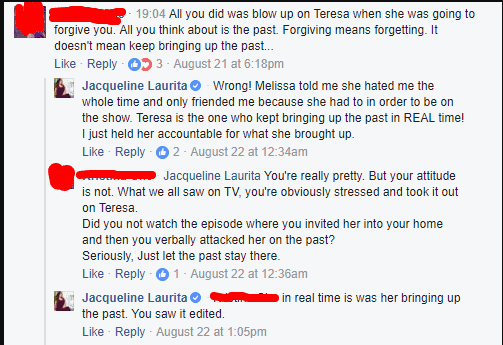 The topic then turned to the upcoming 8th season of the RHONJ and Jacqueline made it clear she won’t be on it. As for her reasoning, she revealed the producers wanted to downgrade her role because of her beef with Teresa and Melissa which led to her decision to walk away instead.

“They gave me a start date. I was going to start filming, and the whole thing. And then they came at me, they were worried that I didn’t have an authentic relationship with a couple of the cast members,” said Jacqueline. “They were worried about how it would make filming work. Would we be able to hang out together and make it look authentic and everything like that… So they decided that it wouldn’t really be authentic.”

Jacqueline continued, “So they wanted me to come and start filming part time to see where my storyline led, and then maybe they would make me full-time. But to me coming on all season long, and filming all season long and then having it be part time in the end… To me all the stress and aggregation for part time isn’t worth it, so I declined.”

No fan of Danielle Staub, she also touched on the rumored incident alleging Danielle was doing sexy times in a bathroom during filming at Melissa’s event. “Yes I heard about the bathroom incident and I want to vomit cause it’s disgusting,” said Jacquline. “No one wants to see that or hear about it. It just grosses me out.” Oh you’re not the only one grossed out!

Jacqueline also revealed she still talks to  Kathy Wakile and Rosie Pierri, adding that she recently went for a walk with Kathy.

When asked how it feels to no longer be on the RHONJ, Jacqueline’s response was, “Less stressful for sure 100%. But honestly if they asked me for a full time position, I would probably say yes just for the money of it… But I’m happier not doing the show if that makes sense.”

She also referred to the show as “toxic”. Gotta love her candid honesty that she would return for the right amount!

As for what Jacqueline is up to these days, she continues to raise awareness about Autism, and is also promoting some skin care products on her website.

TELL US – THOUGHTS ON JACQUELINE’S COMMENTS ABOUT TERESA & MELISSA?