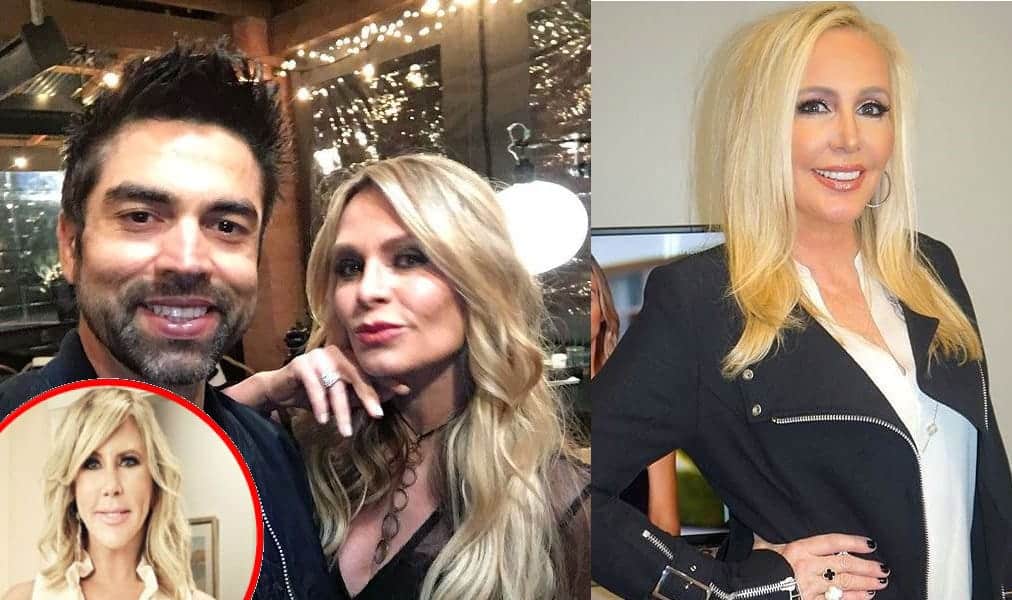 Things continue to take a turn for the uglier on the Real Housewives of Orange County both on and off screen!

The latest is the typically cool and collected Eddie Judge, husband of Tamra Judge, poking fun at their castmate Vicki Gunvalson’s weight and appearance!

It appears Eddie, 44, has had it with Vicki accusing him of being gay and even inviting the Judges’ former friend Ricky Santana to her birthday dinner on the show, during which he claimed he had seen Eddie kissing another man in the past.

Eddie has mostly remained silent through all the drama but he is now letting his Twitter page do the talking with a number of curious retweets.

One of those retweets includes a Twitter user slamming Vicki’s weight! Eddie retweeted the tweet which stated: “Who else thought Vicki looked big and pregnant in that ugly red dress”. Yikes!

Eddie also retweeted another comment which pondered why Vicki hadn’t been fired yet by Bravo, echoing the words of his wife Tamra who revealed last week that she hopes Bravo fires Vicki for spreading gay rumors about Eddie. Screenshots of Eddie’s retweets are below including one about Ricky being a “traitor” – 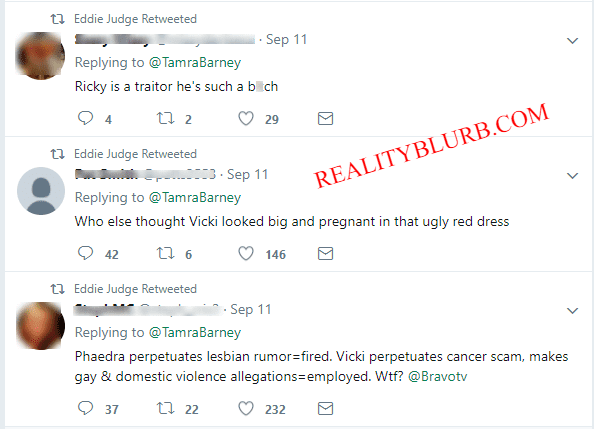 In other RHOC news, Shannon Beador is updating us on her continuing weight loss journey!

Just a month after sharing she had already lost 15 pounds (she gained 40 pounds in the past year), she is now revealing she has lost a total of 20 pounds, and hopes to lose 20 more before the reunion.

Talking to Entertainment Tonight, Shannon, 53, revealed: “I’m not gonna go back down to where I was, like, in season nine, when I started [the show], because as you age, you know, you look gaunt… I want to look healthy.”

Shannon, who stepped on a scale earlier this season to reveal her weight of 172 lbs. and a body fat percentage of 40 percent, reveals she wasn’t that excited about opening up about her weight issues during filming.

“I wasn’t excited about [documenting my weight loss journey], and I sure wasn’t excited to start filming,” Shannon told ET. “It’s, like, ‘Oh, crap!’ Now I gotta be in front of a camera, which doesn’t make you look skinnier! But I knew I was going to start working on the weight loss, so at least now when I watch it, I know I’m down a little. I’m down about half, down about half of the weight.”

TELL US – THOUGHTS ON EDDIE’S RETWEETS?