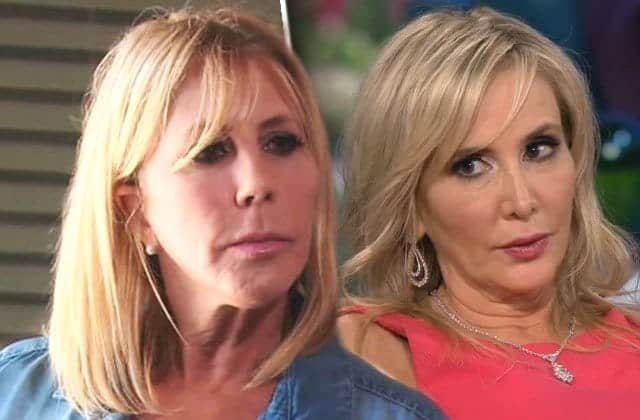 While Vicki Gunvalson has yet to respond to being caught in a lie about inviting Ricky Santana to her birthday party, she is taking the time to slam castmate Shannon Beador!

In her latest blog, the Real Housewives of Orange County star puts the blame on Shannon for her lack of a friendship with her former BFF Tamra Judge! For reals!

Vicki wrote in her Bravo blog, “As you saw, when I left Kelly’s to go back to work, there was a situation with Lydia and Shannon that I was unaware of. Lydia is right. Whenever you are around Shannon, there seems to be an energy where the mood changes immediately. I believe in all of my heart, that Shannon is one of the main reasons why Tamra and I have not been able to reconcile. What I don’t understand is Tamra has always been a strong opinionated woman, but as you can see when Shannon calls her name to “come here now”…Tamra crawled to her like a puppy who was being scolded. It was the strangest thing.”

Call me crazy Vicks but I also think your continued attempts to put out gay rumors about her husband might have something to do with your lack of a friendship with Tamra!

Vicki once again denies any responsibility for Ricky coming to her birthday party and spreading more gay allegations about Eddie. As we all know now, Ricky has shared text messages and a personal invitation from Vicki.

She continued, “Tamra if you are reading this – I will say it for the last time. I did not start this “rumor” nor do I care about Eddie’s past. I did not “set Ricky up at my party to discuss about anything about Eddie”. From what I have witnessed, I know you both love each other and that’s what is important. That’s it. I really don’t think it needs to be discussed any further and wish you would stop blaming me for this.”

Vicki then closes out her blog by claiming to take the high road when it comes to Shannon and David Beador’s marriage despite all the past domestic violence allegations she has made against David.

“It was sad for me to see the disconnect between Shannon and David, and I am hopeful that they will make it through this difficult time in their marriage. I will not be baited into any further discussions regarding it, ” wrote Vicki.  “From what I see, Shannon believes I am responsible for everything, for global warming, climate changes, and I’m sure I am to blame for most recently the two devastating hurricanes and the fires in the Western US.”

TELL US – DO YOU THINK SHANNON IS TO BLAME FOR VICKI & TAMRA NOT BEING FRIENDS?