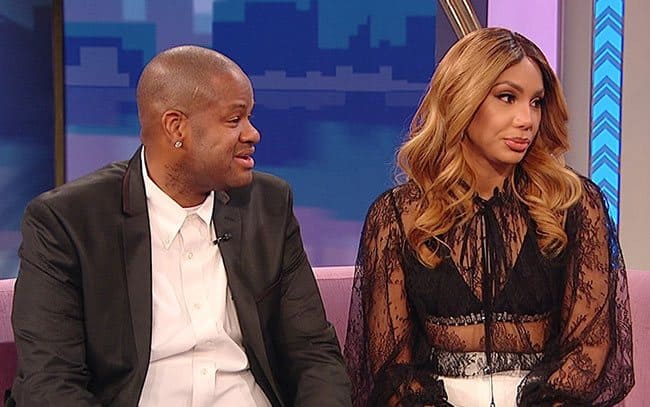 A day after it was revealed Tamar Braxton had filed for divorce from Vincent Herbert, more details are now coming out on why she decided to end her marriage of 9 years.

According to a new report, the Braxton Family Values star getting fired from her hosting gig from The Real played a big role in why she filed for divorce.

Sources close to Tamar tell TMZ that the 40-yr-old R&B singer fell into a depression for months following the firing in May 2016, and that wrecked havoc on her marriage.

The Real firing reportedly created bigger issues in their already troubled relationship. In fact sources reveal Tamar actually moved out of the home she shared with Vince 3 months ago even though they still continued to act like a couple in public. She is now said to be living in a 2-bedroom Los Angeles condo that costs $15,000 a month.

What the TMZ article doesn’t touch on is that Vince is Tamar’s manager and it has been widely speculated that he played a big role in her getting fired from The Real by allegedly causing a lot of drama behind the scenes. So in that regard, it would make sense that she was feeling resentful towards him.

As we reported yesterday, there are also rumors and rumblings that the couple has been having some financial issues. They just put one of their homes on the market for $15 million after reportedly receiving multiple default notices, plus it was reported back in 2014 that Vince owed the IRS over $3 million. TMZ also reported last month that Vince owed Sony $3.7 million after losing a lawsuit.

The couple has one child together – 4-year-old son Logan and TMZ is reporting Tamar wants full physical custody of him.

In her divorce documents, she is also asking the Judge to deny Vince any spousal support.

TELL US – WHAT ARE YOUR THOUGHTS ON VINCE & TAMAR’S DIVORCE?

Follow us and get the latest news delivered to your timeline!