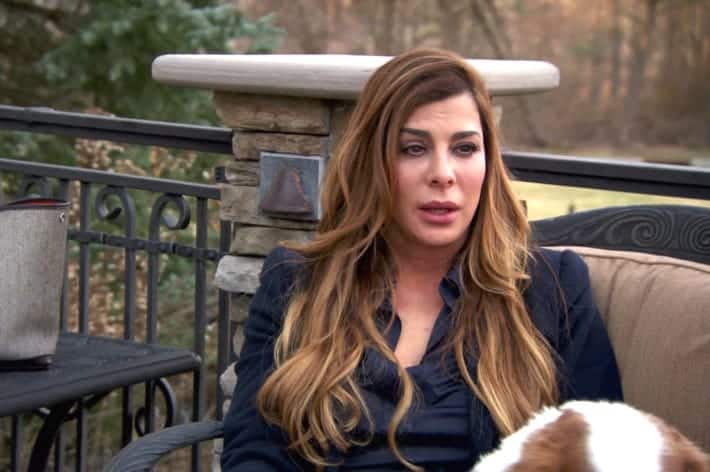 Oh Siggy! In today’s news, Real Housewives of New Jersey star Siggy Flicker seems aware that she is coming off badly this season, some might say appearing “crazy” or “unhinged” — her words, and she is blaming editing for it!

In a blog posted to her personal website, Siggy, 50, says Bravo’s editing is what is making her come off as being cray cray as she insists viewers aren’t being shown what is causing her to act out, instead they are only seeing her reaction to being provoked. And who is doing the provoking? Margaret Josephs of course! Siggy accuses Margaret of “attacking” her family, career, and her mental state. Below are excerpts from Siggy’s blog –

“We are almost half way through the season and all I can say is the Episodes are as surprising to me as they are to you. I wish you had been there to see what was actually said that caused my reactions. I don’t react without reason and I refuse to blame my reactions to my hysterectomy or hormones.

My reactions are in response to attacks. Attacks on what I hold dear. Attacks on my husband, my friends, my hysterectomy, my profession and my mental state by a person who knows nothing about me and who does not care about the consequences of her reckless attacks. Unless you have spotted the disjointed nature of some exchanges, you cannot reconcile my reactions without the nasty underhanded comments that prompt my responses.”

She does seem to admit it wasn’t all editing –

“The camera doesn’t lie. I shimmied (my real boobs); I stuck my tongue out; I teared up; I made faces and I mentioned her cheap knock offs. Unfortunately Margaret’s side of the exchange seems to have been lost. Why did I resort to such antics?”

“Margaret couches her attacks in dismissive language and snarky comments that cut to the bone – always focusing on her targets of choice – whether it be me or Dolores: insane, unhinged, hypocrite, follower, minion, yes girl, soggy. If she were truly joking, she would use the same approach with all of us. She doesn’t. She focuses her special brand of attack on me.

“As soon as I respond, she immediately hones in on my profession – up until this episode I never mentioned her career or her less than fabulous brand… After being hit at every past encounter about my profession, I finally responded with my opinion of Margaret’s business. That’s right – my comment was a response to the 97th dig at my profession. How this woman continues to swipe at 25 years in my profession without a blemish, while her business is engulfed in lawsuits and bankruptcy is beyond me.

“Call me crazy and unhinged all you want, but I would rather be me than calculated, condescending and dishonest… I’m sure the self-proclaimed Joan Rivers of the Real Housewives will reveal what prompted my saying she was the ugliest person in the world for making fun of me. Go on, ask her. She’s banking on you not demanding to see the exchange in its entirety.  I have a great idea, let’s put the Real back in Real Housewives of New Jersey.”

It’s possible that Bravo refused to publish this blog on their official site, so Siggy decided to post it on her personal website. Siggy’s post comes a week after Andy Cohen reportedly told her to take some time away from social media.

TELL US – THOUGHTS ON SIGGY’S BLOG?