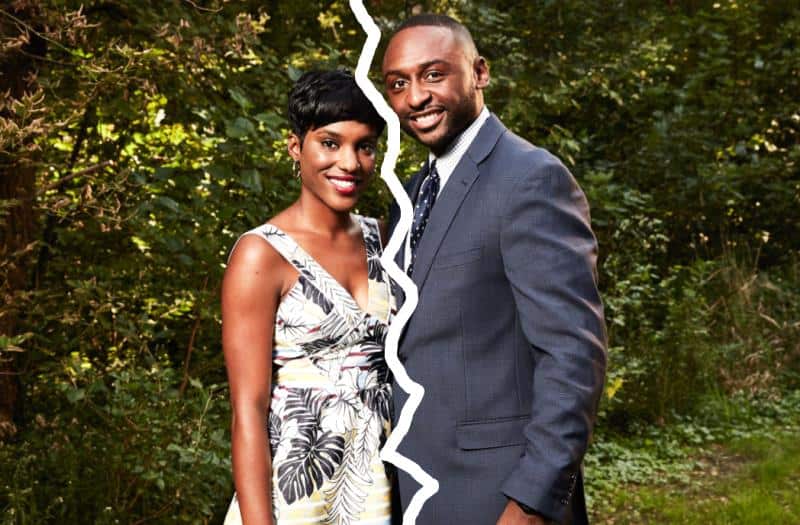 If you recall, Sheila revealed earlier this month that a woman contacted her to let her know Nate had been cheating with her throughout their entire marriage. Even worse, Nate admitted to everything according to Sheila. Well, Nate finally took to his social media page today to reveal he has filed for divorce, while claiming infidelity did not play a role in the breakdown of his marriage.

Nate tweeted: “Prior to any statements made about me, we were no longer living together and I already filed for divorce. This was known by both parties, my lawyer, and the lawyer for the show. The reason that led me to file for divorce from Ms. Downs was thoroughly understood by all parties as well. Infidelity was not a reason, nor did I ever admit such a thing. Thank you to those of you who have shown support throughout this tough time.

A screenshot of his statement is below – 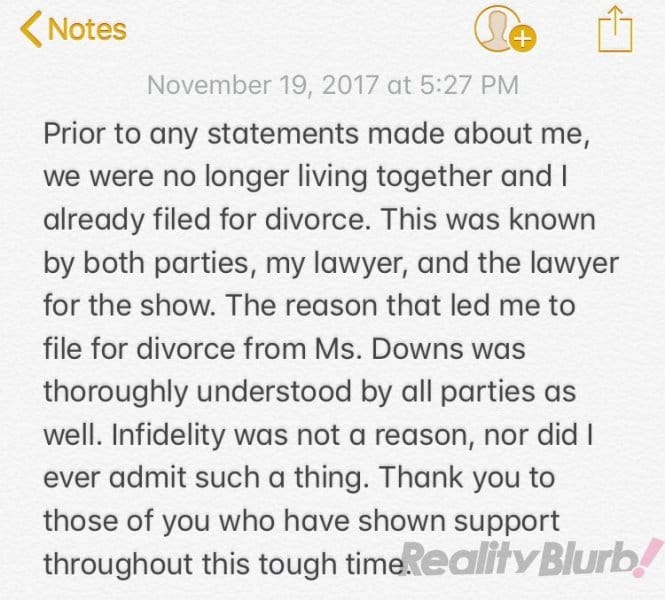 Sheila is however not buying what Nate is selling. She responded moments after he posted his statement making it clear that he only chose to file for divorce once he realized she was planning to file. Sheila also states Nate filed for divorce on November 14 which is over a week after she publicly accused him of cheating of her on November 5.

Sheila tweeted, @Nate_MAFS filed for divorce while my attorney was preparing paperwork on 11/14. He screamed divorce every argument. He moved out at least a dozen times… @Nate_MAFS knows what it is. And the woman isn’t new.

Sheila also released her own statement during which she shares how Nate constantly threatened her with divorce, and revealed she believed they were working on their marriage, citing the fact that they were still intimate during a cruise they took together in early November.

Sheila’s full statement is below –

“I see that instead of finally operating in integrity,@Nate_MAFS chose to continue to lie. My husband and I had problems. Yes. He was dishonest and there were women throughout our ENTIRE marriage.Admittedly, I didn’t know how to hand that; and as you saw on the show, I handled it poorly at times. I’m not proud of that, but I am extremely proud of the woman who acknowledges that and has made a conscious effort to change the things I didn’t like. When I got married, I meant FOREVER. I unfortunately was the only one. If you watch the show back, my meltdown on the balcony was because Nathan said that he wanted a divorce. That was the first of probably 40+ times. And then came the women and the nights he would ignore my calls, block my number, engage in illicit activities, or not come home at all. One the cruise,we were intimate.

We admittedly had problems, but I was fighting for my marriage only to have a woman who had reached out to me before call me AGAIN with receipts.. Now had my husband already begun living a single life? Absolutely! But he had never stopped… and unlike him, a covenant with God wasn’t as easily broken as taking off my wedding ring and bedding others… Again, perhaps he would’ve fought harder for the marriage if he hadn’t already moved on. We’ll never know, but he will have to see God for that. And I can proudly say that even on our worst day, I honored my vows and loved my husband and I would have until he showed me without a shadow of a doubt that I was in this alone. His infidelity and abandonment of the marriage released me. And although I’m not excited about the impending divorce, I am proud of this woman who knows what she deserves and a God who has shown me the true definition of unconditional love.”

Screenshots of Sheila’s statement are below. Must say from the outside looking in, Sheila’s version sounds more credible. 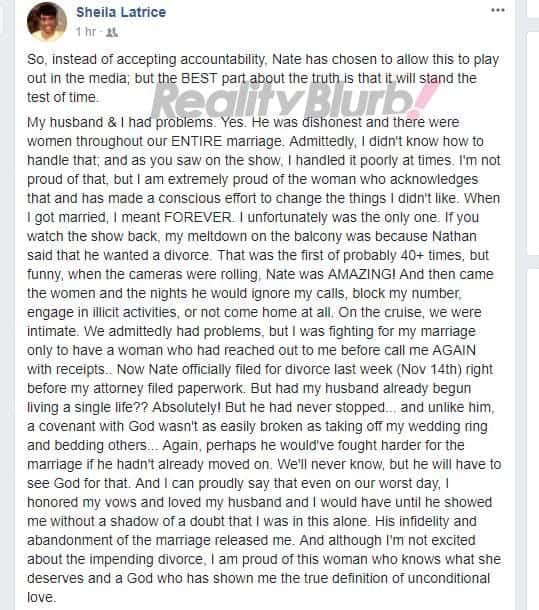 TELL US – WHO DO YOU BELIEVE? SHEILA OR NATE?

In this article:Sheila Downs, Nate Duhon