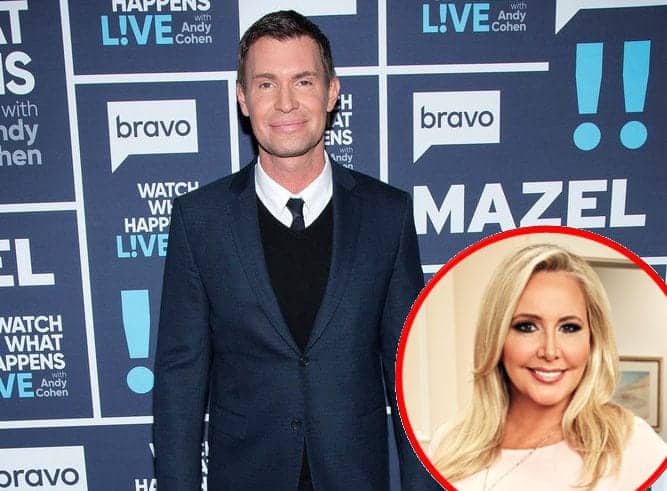 Flipping Out star Jeff Lewis appeared on Watch What Happens Live Monday night during which the chatty bravolebrity was quite frank when it came to a number of topics!

First Jeff, who is very close to RHOC housewife Shannon Beador, was asked by host Andy Cohen on how Shannon was doing these days since filing for divorce from husband of 17 years David Beador.  Jeff stated that she was doing “awesome and amazing”, adding that she was turning things around.

Next was a question by a caller who wanted to know if Jeff saw Shannon and David’s divorce coming. “Yes I did,” responded Jeff, with Andy chiming in and stating: “With all due, it wouldn’t have taken a rocket scientist.”

Jeff continued, “I just have to be careful. Like I know a lot. I’ve known it for a long time. But I’m a loyal friend. I’m loyal.”

The topic then turned to the stunning RHOC reunion reconciliation between Shannon, Tamra Judge and Vicki Gunvalson.

“Can I tell you, I think I cried. I was so, so happy,” said Jeff who is a big fan of the O.C. franchise. “It’s what the franchise needed. Really what that particular city needed.”

IS DAVID BEADOR HIDING MONEY FROM SHANNON IN DIVORCE?

Indeed as Jeff revealed months ago that Bravo needed to consider firing Vicki if she didn’t make up with the ladies, stating the show had gotten too toxic with some of the ladies not speaking.

So was the reconciliation genuine? Are the ladies still talking today?

“They’re getting along. They’re actually really excited because they already started talking about the trips next season and the tequila,” revealed Jeff. “And that’s what I love about that show. When they go and they drink and they party, and they jump in the pool. I’m in!”

Finally Jeff was asked about his relationship with his former housekeeper Zoila Chavez and if he still sees her following her departure from Flipping Out. He answered, “No, not much. She’s in Nicaragua seeing family,” adding, “yes, it’s all changed.”

TELL US – WHAT ARE YOUR THOUGHTS ON JEFF’S COMMENTS?