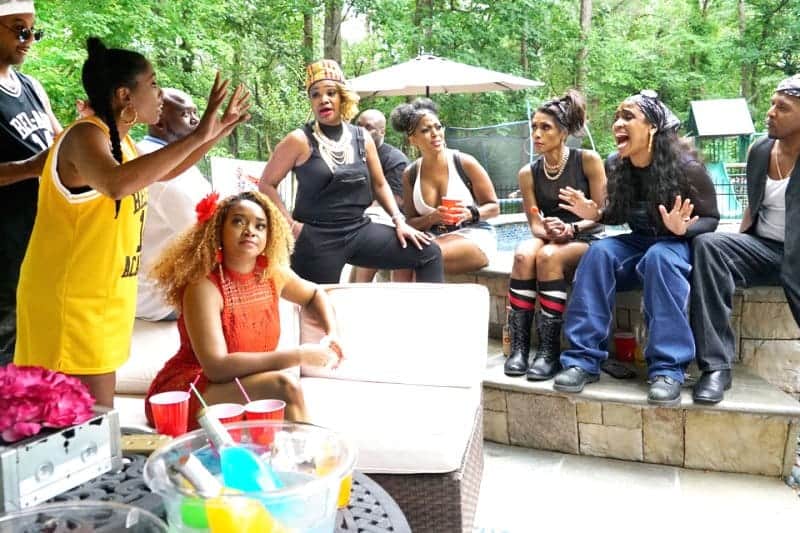 It may be a new year, but it’s safe to say that the ladies of Married to Medicine haven’t resolved to change one bit, and that’s fine by me!

Last night’s episode had enough drama to heat a VERY frosty January night. For starters, Dr. Jackie came face to face with her husband, Curtis, for the first time since she asked him to leave their home following the revelations that he’d been carrying on a relationship with another woman.

It was a short visit…and an awkward one. Curtis seemed pretty nervous, but Dr. Jackie was as impassive as ever. He began the conversation by stammering “have you been locking the doors at night”? Dr. Jackie just laughed at this, and assured him that she was, indeed locking up the house. She then thanked him for all the flowers and expensive gifts he’d been sending, but let him know that a few pricey trinkets weren’t going to fix anything.

Curtis acknowledged that he didn’t think the gifts changed anything, and that he’d only sent them to let her know that she was on his mind. But he said he did want to work on fixing their marriage. Still cool as a cucumber, Dr. Jackie asked him how he thought he could “fix humiliation”? Curtis didn’t really have a response to that, but told Jackie that she was “not the only one hurting”.

Wow! Just…wow. He actually tried to gain her sympathy…for HIS affair! Worse, he brought up how his family had been hurt by their separation. So yeah, a guilt trip too! He’s a real gem.

In the end, Dr. Jackie stood firm. She agreed to meet with him again, but only in their home, and said that of all the things she’d been through…breast cancer, infertility, the death of her father…Curtis’ betrayal was the worst. Like I said: short visit. You can click here for a spoiler on whether or not Dr. Jackie and Curtis are back together today.

Dr. Contessa was dealing with some drama on the home front as well, served up by her cantankerous and insubordinate nanny, Miss Renee. Miss Renee’s loud and drunken behavior at Mariah’s Mothers Day party was clearly weighing on Contessa’s mind, but her approach with Miss Renee remained almost reverent.

I get it. Miss Renee is an older woman, and Dr. Contessa is reluctant to show any disrespect. But come on, girl! You’re PAYING her! Dr. Contessa asked her what she remembered from the party, and Miss Renee said she was uncomfortable around the women, and drank to feel more at ease.

Contessa sympathized, and also assumed that the older woman was perhaps a little jealous of the opulent lifestyles of her new friends, so she suggested a “do-over” in the form of a 90s themed party at her home. Miss Renee was gracious enough to agree to let Contessa throw a party in her own home, but let her know that she wasn’t pleased with the idea.

She had an attitude right from the beginning. During the planning, she shot down all of Contessa ideas for decorations, dismissing them as “bourgie”. Just before the party started, Contessa apparently stepped over the line by asking her nanny to feed the children she pays her to take care of because Miss Renee went OFF!

She cursed at Contessa, and even threw something at her! Then she said “fire me, because I don’t give a f***”, and stomped off! So, I’m not sure how much we’ll be seeing if Miss Renee is 2018, either. But one clown doesn’t stop the whole circus, so the 90s party went on as planned, complete with low riders and Alize taken “straight to the head”. Pure class.

The ladies were festive, and turned out in full 90s regalia. There were fanny packs, asymmetrical hairdos, kinte printed hats. And everyone was getting along just fine…for a while.

Dr. Heavenly was still angry with Dr. Simone for taking her to the voodoo store when they were in New Orleans, and she passively aggressively let her know it..snide remarks, dirty looks. Well, you’ve met Heavenly. Anyway, Dr. Simone wanted to talk it out, and the two women, along with their husbands, went to discuss Dr. Heavenly’s feelings.

Dr. Heavenly’s husband, Dr. Damon took the lead, and explained that Heavenly has been “trying to get closer with God”, and therefore, took offense to being taken to a voodoo store.

Dr. Heavenly added that Dr. Simone’s comments about her not always acting in a Christian way were also hurtful. Dr. Simone displayed appropriate contrition, and the two ladies hugged it out.

But the real drama came when Mariah overheard Dr. Contessa saying for the third time that the party was not meant to be “bourgie”. Mariah (probably correctly) took the comment as shade being thrown at her Mothers Day party, which WAS pretty bourgie, if we’re being completely honest.

When Mariah mentioned it to Dr. Simone, Simone reminded her that she’d thrown some major shade herself at her Mothers Day party, when she gave Toya an award, and mentioned that Toya had never said anything bad about her mother, Lucy.

Simone told Mariah that it had been obvious to everyone that she’d meant the comment as a dig toward Heavenly, who had said “your mother” in response to one of Mariah’s insults.

Mariah insisted that she wasn’t taking about Heavenly, and that she’d given Toya the award with the best of intentions. Scoffing at this, Simone asked the other ladies to join the conversation. Bad idea! All of the ladies did, in fact, agree with Simone, and what followed was mainly unintelligible cursing and yelling.

But things really took a nasty turn when Heavenly again said “your mother”. Mariah was incensed, and immediately defended her mother, and admonished Heavenly for her disrespect of the older woman. Heavenly was quick to remind Mariah that her mother is no delicate damsel in distress, after all she once “hit a bitch upside the head with her purse”.

Mariah immediately jumped into Heavenly’s face, but her only response was “it wasn’t your head”! Oh, Mariah…we’ve missed you!

The the other ladies looked on, aghast, and wondered how things could go so wrong so fast. After all, the 90s were a much simpler time: no wars, good music, a cool president who played the sax. But alas, this is a new and darker millennium, and the fight continues next week. Stay tuned!

TELL US – WHAT ARE YOUR THOUGHTS ON THE MARRIED TO MEDICINE RECAP AND LATEST EPISODE? SHOULD JACKIE GIVE CURTIS ANOTHER CHANCE? TEAM HEAVENLY OR TEAM MARIAH?