RHOA’s Kandi Burruss Slams “Lying” Kim Zolciak Over Claims She Made On the Show! Kim Responds 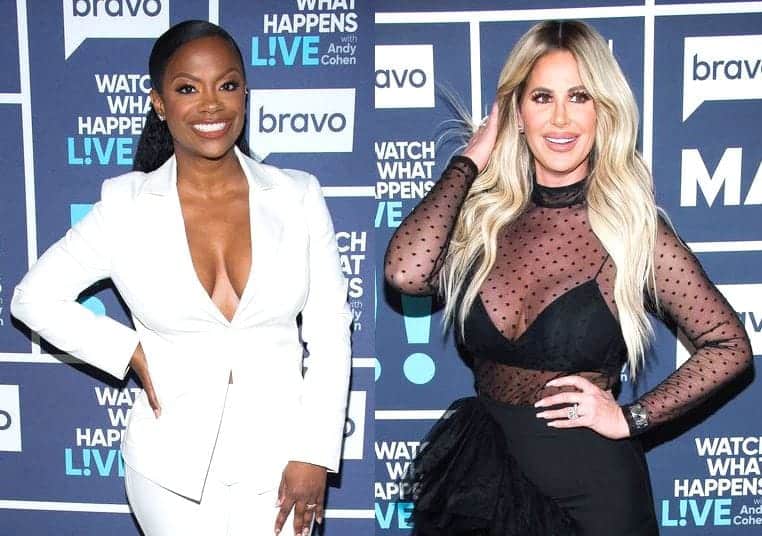 It’s getting harder each day to keep track of all of the housewives feuds!

The latest now involves Real Housewives of Atlanta castmates Kandi Burruss and Kim Zolciak, as the two ladies got into a Twitter war last night over some comments Kim made about Kandi on the show.

During Sunday night’s episode of RHOA, Kim, 39, met up with Sheree Whitfield for dinner and then claimed Kandi, 41, had made a move on her in the past! Whoa. “On my kids’ life… I wouldn’t let her,” said Kim on allegedly turning down Kandi.

Well Kandi took to Twitter as the episode aired and not only strongly denied Kim’s claims but also slammed her and called her a liar.

Kandi wrote, “I’m sick of these b***hes lying on me. @KimZolciak I have NEVER wanted you… And stop swearing on your kids while you’re telling lies.”

She later added that Kim was lying in a desperate attempt to become a full time cast member on RHOA again. As you all know, Kim is back this season as a part-time cast member and has only appeared in a few episodes.

Kandi added, “Somebody’s really reaching for a permanent peach here… This is my house. You’re just a visitor!” Ouch!

Of course Kim responded to Kandi just moments later, also via Twitter, writing: “If anybody is lying it’s you @Kandi… and b***h if it weren’t for me there would be no house. Remember I built this house!”

Kim’s tweet was a little more vulgar than that but we chose to post the PG version! Kandi is just the latest RHOA castmember to feud with Kim, who has ongoing beefs with Nene Leakes and Kenya Moore.

So we have to ask, who do think is telling the truth in this feud? Kandi or Kim? Feel free to vote in our poll below!

TELL US – WHO DO YOU BELIEVE? KANDI OR KIM?