Married To Medicine Recap – With Invitations Like These…Stay Home 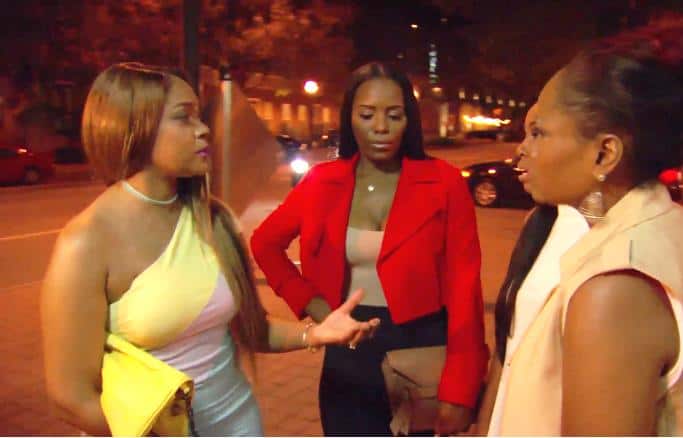 On paper, the ladies of Married to Medicine have it all together…impressive careers, beautiful families, supportive friends. A truly fabulous life. But a closer look into the lives of Atlanta’s Fiercest Physicians reveals that no one can it have it all together all the time.

This is certainly true for Dr. Jackie. She’s probably the steadiest and sturdiest of all the ladies, but this season we’ve seen her rocked by her husband’s affair. It was a betrayal, sure.  But for Jackie it was much more than that. Seeing her husband’s tawdry dalliances splashed across tabloids, and gossiped about in the blogs, was a devastating humiliation. She also worries that she’ll be seen as weak,  if she decides to stay.

For these reasons, Jackie has limited her contact with Curtis to brief visits in their home. But in last night’s episode, it appeared that she made a breakthrough of sorts. She finally agreed to a “date” with her estranged husband in public.

This was a big step for her, and Curtis wisely kept things low key, and planned a picnic for two. It started out really well, and it even appeared that Jackie was softening. But he did too much, too soon.

In a move that would have been incredibly romantic under any other circumstances, Curtis presented Jackie with an “invitation to the beginning”, a trip to Paris. Paris is where Jackie and Curtis fell in love. They visited the city as a young couple, and Jackie had been swept off her feet. But Jackie doesn’t want to go back to the beginning. She’s not even sure wants to pick up in the middle, so she declined.

In Dr. Contessa’s case, it’s her separation from her nanny, Miss Renee, that’s causing distress. Miss Renee may have been insubordinate, and even downright rude sometimes, but she was THERE. Now that she quit,  Contessa and her husband, Dr. Scott are trying to juggle three young children and two demanding careers with no help.

They’ve been struggling, for sure, and Contessa is feeling the dreaded “mom guilt”, and fears she’ll eventually regret the time she spends away from her kids.

Contessa explained this to Scott over a rare dinner out together, and even suggested  that she might give up working altogether for a while. Scott didn’t think this was a good idea. He pointed out that since they’d chosen to purchase such an expensive home, both incomes were needed.

In the end it was decided that Contessa would try to cut back her schedule,  and he would work more. But Scott and Contessa may  want to talk to Toya and Dr. Eugene about that arrangement before they make any changes.

And that brings us to Dr. Heavenly. She rarely has is all together. And why is that? Things seem to be good on the home front, and her dental practice is thriving, but Heavenly likes conflict. And if none exists, she’s happy to invent some.

Heavenly claims that she’s on a spiritual journey, trying to get closer to God, be a better person. But she just can’t seem to make that work. For starters, she has a snide remark for everybody. In last night’s episode, Heavenly exclaimed over how handsome Simone’s son, Michael was becoming, and how surprising it was, considering how “funny looking” he used to be!

Who says that?! Luckily, Michael inherited his mother’s sense of humor, and the two just laughed it off.  And then, without a trace of irony, mind you, Heavenly suggests that she would be the better person to hostess the upcoming couple’s trip, because unlike Simone, she’s a “relationship expert”. Bless her heart!

Simone asked her how she expected to do this, considering her capacity (need) for confrontation. She assured Dr. Simone that she’d “be nice”. Dr. Simone seemed skeptical. Toya had similar concerns, and also wanted to know if Heavenly was going to invite Mariah. Heavenly let her know that this was HER retreat, and she didn’t intend to invite her.

Simone and Toya both felt this was unfair, and let Heavenly know it. After all, they told her, in the past all of the couples had been included, and this year shouldn’t be any different. Heavenly agreed to think it over.

But, of course Mariah is no easier to deal with than Heavenly. The ladies all attended an event to celebrate the launch of the new app Simone’s husband, Cecil invented, and Mariah walked right past Heavenly without speaking.

The other ladies decided to sit them down and talk about the trip, and hopefully get them to behave like adults. It wasn’t to be.  Mariah was still angry over the big blowup at Contessa’s party. She’d been willing to forgive Heavenly’s first “your mama”, but then she’d said it again, and Mariah wasn’t having that!

Heavenly was still angry at Mariah because she felt that Mariah publicly called her out at her Mother’s Day party, (maybe they should stop having parties) when she said Toya never talked badly about her mother. It was shady, and shade knows shade when it sees it, so Heavenly wasn’t buying it when Mariah played innocent.

The two began to squabble loudly once again, and once again, Heavenly went THERE. For real this time.  “F**k you, and your mama!”, she yelled. Well, that did it! Mariah stormed out in a huff, and the ladies reprimanded Heavenly for losing her cool. Simone suggested that they go after Mariah so Heavenly could apologize.

I’ve gotta say, the sheer speed wih which Heavenly can switch personalities, is actually pretty impressive.  She could qualify for the Olympics! I don’t think they have that event, but they really should, right?

Anyway,  by the time Heavenly and Simone reached the ground floor, she was sweet again. She apologized, spoke softly, smiled, and politely invited Mariah to join them in their couple’s trip. Mariah agreed to go, but she was still visibly angry. Through gritted teeth she explained that there’d better be no more talk of mothers.

Now, Mariah never raised her voice, which admittedly was kind of scary. It was one of those whisper screams, generally employed by mothers just before their child fully melts down in the grocery store. And we all know it means… ‘I would literally kill  you if there weren’t witnesses’.

Heavenly clearly understood the threat, and she lost it all over again, yelling and cursing at Mariah. Loudly! In the street! Really,  DOCTOR Heavenly?! That type of thing may fly with Toni Braxton’s sister, but I don’t believe I’d care to have my teeth cleaned by a street brawling dentist with multiple personalities!

So, see…no one has it all together all the time. And doesn’t that make you feel a little better about your own life?

You’ll probably feel GREAT next week! The couples are headed to Barbados  (sans Curtis, of course), and it looks like things get pretty heated. Stay tuned!

TELL US – WHAT ARE YOUR THOUGHTS ON THE MARRIED TO MEDICINE RECAP & LATEST EPISODE? WHO IS IN THE WRONG?  HEAVENLY OR MARIAH?