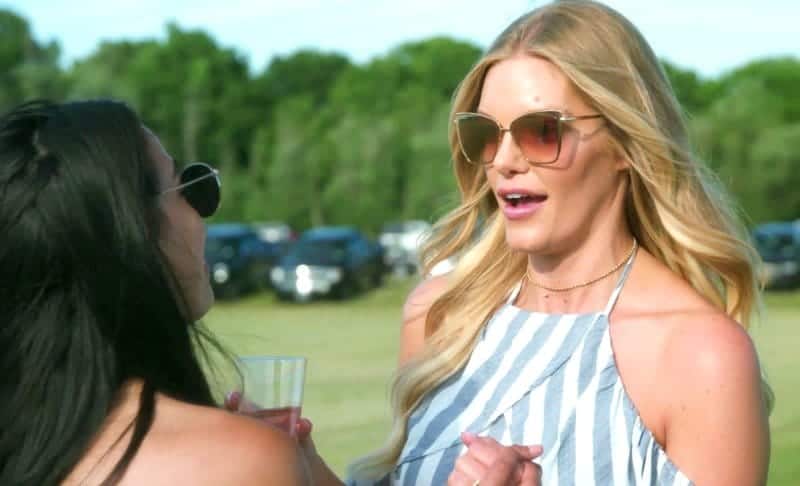 “Is sh*tshow one word or two?” We are already off to a solid start with this season’s Summer House gang. Kyle narrates the intro and promises that, “We plan on making this summer the biggest, weirdest, wildest one yet.” Fingers crossed, Kyle. Fingers crossed.

The episode begins in New York on a Friday afternoon. Kyle, aka “Captain Cooke,” is headed back to the Hamptons, but this time he has a girlfriend. Kyle and Amanda made it “Instagram official” and she is coming with to the summer house. Making moves, man. Someone is growing up!!

Stephen and Lauren roll up to the Hamptons, sans Ashley. “It’s the weirdest feeling not being with someone after 28 years.” Ashley has moved to California, so Lauren has attached herself to Stephen. They gossip about the new girl and guy that Carl is bringing to the house this summer. Lauren shares that “Carl took me for a wild ride last summer.” Someone sounds a little heartbroken still… The broken heart gets healed quickly as Stephen and Lauren get the first look at this year’s house. They investigate and do their damndest to find the best spot in the house. Are they Ramona and Sonia ala RHONY?! Stephen and Lauren prepare for the guests and take a break to discuss the NYC pride parade. Stephen is trying to embrace his new life, and his girl Lauren is there to help.

Enter Lindsay, the resident publicist. She declares that she is single and ready to mingle. Next to arrive are the lovebirds, Amanda and Kyle. Kyle gets salty fast over the bedroom issue and he complains like a baby, which is sort of warranted considering Lauren’s God-awful excuses. The fight goes on for FAR too long and finally the children come to an agreement. I think I need a drink after that ridiculousness.

The final car makes it to crib and their entrance is interesting to say the least. According to Stephen, “Lauren and Danielle are sizing each other up. There are some serious Regina George issues” since they BOTH have dated Carl. We all know that Danielle is going to be this season’s fan-favorite, as she shares she will sleep anywhere, even on a pool table. That is a bold move. While the kids bicker, Stephen attempts to prepare a “successful dinner party.” Lauren and Lindsay are the last to arrive because they were too busy painting their faces and talking about life.

In the meantime, everyone else proceeds to get bombed. Carl continuously repeats “no stress” and that eggs on an already drunk Stephen. That in turn sets off Lauren and the next thing you know, we have a dinner party gone terribly wrong. Welcome to the house, ya’ll! Carl is wasted and I think it has to do with him trying to mask his discomfort with having two exes in the house. #whosfaultisthat?

To try and save the dinner party, Lindsay recites a very clearly scripted list of rules and a passes a torch to the newest summer house couple, Kyle and Amanda. Post dinner, the rose’d people dance, drink, and dance some more. According to Kyle, “Our summer house is essentially a fancy insane asylum.”

The next day, Lauren declares she has started her summer off “with an away game.” Go girl! The clean up makes me gag and the level of hung over is palpable. SOMEHOW Danielle and Carl are outside shooting hoops, and she shares that Carl was “on fire” last night. She calls him out for his drunken antics and she reminisces about their past relationship. Even SHE says he is not so great once ya get past the surface. I could have told you that.

Q: How many thirty-something year olds does it take to get a slushy machine going? A: Too. Many. In the meantime, Stephen gets a fake apology from Carl and he is concerned that Carl may ruin his pride parade experience the next day. I smell foreshadowing!

Later, everyone gets dolled up in their Saturday best for a polo match. Carl leaves the gang and begins schmoozing with ladies, but the ladies of the house aren’t going to let him be the only one hooking up. They begin awkward encounters with unattractive men and dub themselves “the fearsome foursome.” Despite the fact that Danielle and Lauren have both slept with Carl, they seem to be pushing that aside for the sake of the summer house. Now THAT’S a sign of maturity. Bravo, girls. (See what I did there?) Lauren and Danielle bond over Carl and Danielle explains that he is like “Mexican food.” Amazing. #byecarl

Back in NYC, Stephen and Lauren don rainbow sweatbands and stickers while they wait for a very late Carl to join them. Stephen shares that he is “in the changing area” of the closet because his family doesn’t know much about his lifestyle. Oh, they’re DEFINITELY gonna know now, Stephen. Carl finally rolls up to support his friend and the parade begins. Stephen explains that he grew up in a “conservative, religious family” and it is so nice to see him being himself. Carl is ALSO being himself: “a tall ape-man.” Stephen’s words, not mine. Way to steal the spotlight, dude.