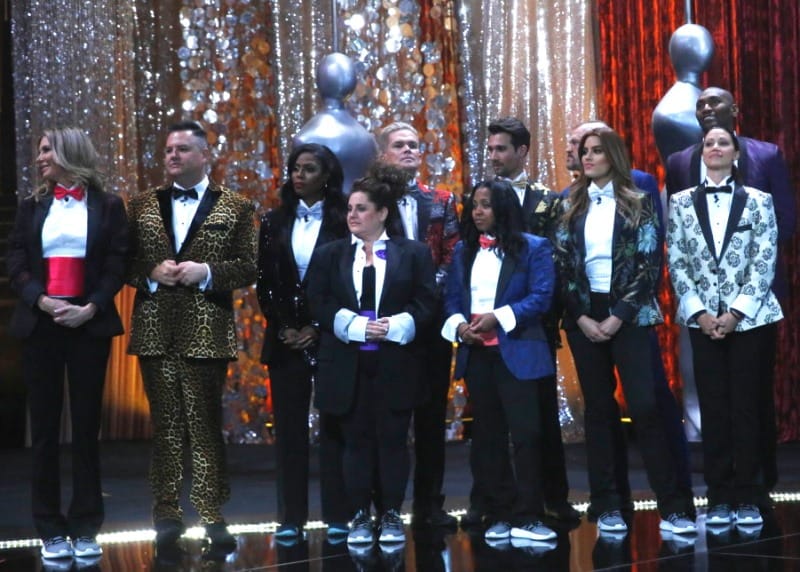 The new season of Big Brother kicked off last night with a twist! For the first time in the series’ 21 season run, the housemates are celebrities.

Granted, they may be playing a little fast and loose with the word “celebrity”, but this group of C and D list favorites and blasts from the past make for an eclectic mix that are sure to bring plenty of fun and drama to the reality show-meets- game show hybrid we’ve come to know and love.

The group boasts two musicians, Mark McGrath, former front man of the 90’s one hit wonder band, Sugar Ray (who among us DOESN’T crank up the volume and drive a little faster when “Fly” comes on the oldies station); and James Maslow, a member of the boy band  Big Time Rush, and star of the television show of the same name.

Both music men have easy going personalities, and are eager to compete, but neither seems particularly knowledgeable about the show, itself.

There are also two athletes in the house. Chuck Liddell, former UFC fighter and Metta World Peace (no, his mother did NOT name him that) who used to play for the LA Lakers. These two men are certainly no strangers to fierce competition, but again, neither seems to know the ins and outs of THIS game. In fact, both men admitted to never having seen the show.

Keisha Knight Pulliam, or Rudy Huxtable to my fellow Gen Xers out the there, and Ariadna Gutierrez, former Miss Colombia, best known for being wrongly crowned Miss Universe in 2015, are also newbies to the game.

Neither was a big fan of the show prior to being on it, and both seem to be out to prove something. Keisha that she can still be a reason to tune in, and Arianda that she’s more than a pretty face.

The Real Housewives of Beverly Hills alum, Brandi Granville was pretty direct about why she was there: she’ll “do anything for money”, and the $250k prize will go a long way toward paying her kids’ swanky private school tuition.

Television personality, Ross Matthews, and actresses Shannon Elizabeth and Marissa Jaret Winokur are the Big Brother “super fans” of the group, and they all came to win. We found out that Shannon and Marissa actually knew each other prior to the show…a little tidbit they agreed to keep to themselves for the time being.

Last but certainly not least was Omarosa. Yes, THAT Omarosa! She’s certainly no stranger to reality or competition shows. Her time on the first season of The Apprentice put the show on the map. She’s as cut throat and manipulative as they come!

In fact, her snake-like prowess was so impressive, that Donald Trump gave her a job on his staff. And although it’s still not clear whether she quit or was fired, she said  her time in the White House taught her the importance of watching your back, and “in some cases, even your front” (no she didn’t!).

So don’t blink. This is going to get very interesting, very fast. Within moments of meeting each other, the housemates made snap judgements, formed alliances, and zeroed in on enemies.

Ross was immediately concerned with the “toxicity” Omarosa might bring into the house. And when James, who was probably still in preschool during the first season of The Apprentice, asked who she “apprenticed for”, he recoiled at the mention of Donald Trump, and said they’d discuss it further at a later time.

James also got off to a bad start with Brandi. She’d made a bee line for the bar, and had completely lost her filter, by the time she found herself in the kitchen with James and Mark discussing music.  Brandi had a lot of questions about signing, and continually dismissed James’ answers, and said she wanted to hear what Mark had to say. It was pretty rude, considering she hadn’t actually directed her questions to anyone in particular, and James had only been trying to be sociable.

James decided then and there that random was an out of control “drunk”, and vowed to nominate Brandi for “eviction” at the first opportunity. For her part, Brandi decided she didn’t care for the  “pretty boy” young boy bander.

The six ladies of the house decided that with this being “The Year of the Woman”, this season should have an all female finale. They agreed to work together, and get rid of the men as soon as possible.

Host Julie Chen called the housemates together, and announced the first Head of Household (HOH) competition. For those new to the show, the HOH title changes hands each episode, and they get to nominate any housemate they wish for eviction from the house. But before they got started, Julie told them she’d added a new  twist.

She directed each housemate to stand on a star on the stage. Each star was numbered, and whomever was standing on the star that corresponded with the number in the sealed envelope she was holding would be safe from the first eviction, but would also not be eligible to compete for the HOH title.

Omarosa chose the right star, and was deemed safe for the time being, and watched as the others competed. The fix mat have been in on this one. No way were they going to risk Omarosa getting kicked off the show that soon!

Each of the remaining contenders had to grab onto a giant award statue that looked like an Oscar. The statues lifted from the ground, spun the housemates around, and even sprayed makeup and paint at them as they held on for dear life. Julie even arranged to have former contestants put on a song and dance number to distract them.

One by one they fell. The men didn’t fair well at all..even the athletes, and eventually James was the last man standing…well, swinging from a giant statue…with Arianda, Brandi, Keisha, and Shannon still hanging tough.

It finally came down to James and Shannon.  But  James began having some trouble, and nervously suggested that he and Shannon make a deal: whichever one of them won HOH, they would agree not to nominate the other for eviction. Isn’t that just like a guy? He’s about to lose to a girl, so now he needs to find a way to save face!

But no such luck!  Omarosa put the kibash on the deal  right away, and cheered Shannon on. And just like that, James let go. Shannon was named the season’s first Head of Household.

But before she could even get cleaned up, and revel in her new found power, Julie announced yet another twist. Each contestant was given a gift bag, and while some of them did contain Big Brother swag, some contained an even better gift…the power to recast the HOH! If used, this would unseat Shannon, and transfer her eviction powers to another housemate.

Now, this is a competition show, and they love to build suspense, so we won’t know who got what in their bags, or whether the powers will be used for good or evil, until part two of the premiere airs tonight at 8, on CBS. Stay tuned!

TELL US – WHAT ARE YOUR THOUGHTS ON THE BIG BROTHER CELEBRITY RECAP & PREMIERE EPISODE?