Vanderpump Rules’ Faith Stowers Cries Due to Bullying Over Jax Fling, Reveals Why She Recorded Him & What He Really Said About Brittany 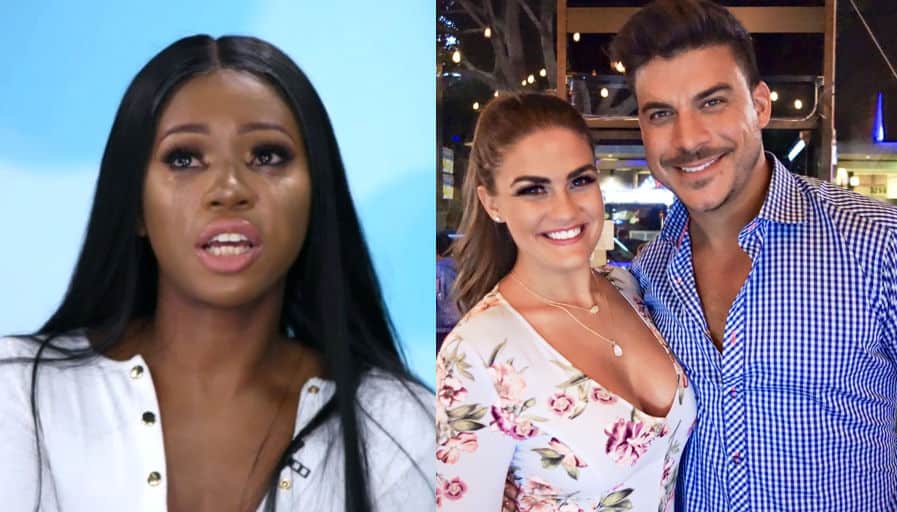 Vanderpump Rules star Faith Stowers is speaking out following her recent back and forth with Brittany Cartwright.

In a new interview, the former SUR server broke down into tears as she opened up about the bullying she has received following her hook up with Jax Taylor while he was dating Brittany. Faith also explains why she secretly recorded Jax and goes more into detail regarding what he really said about Brittany on that audio tape. She then answers the question of just how many times she got together with Jax.

In an interview with ET Online, Faith, 29, first opens up about how her fling with Jax, 38, came about. She states Jax was quite persistent and pursued her for about a year.

“[Jax] was Twittering, dm’ing me for a whole year trying to hang out,” Faith reveals. “I did not accept his advances because I, at the time, everyone knew they were a couple. They were fresh, they were new…. What transpired was when he was telling me they were done… which was proven on the audio, and he was pretty much telling me they were done, so I’m thinking, ‘OK, I’ll give you a shot now.’”

Faith then burst into tears when speaking about the reaction and bullying she has received from the public following the cheating revelation.

“It was just tough because social media is supposed to be this platform where you can help others and show people you’re life,” she shares, tearing up. “I did make the decision to live my life the way I did, and make the choices… but it was just tough because i wasn’t able to tell [the viewers] what really happened from my side, for them to change their opinion… so it was tough getting the backlash, some of her fans were, you know, saying really mean things to me…. I can act tough and, like, it doesn’t bother me, but it bothers me.”

The topic turned to her secret audio recording of Jax which James Kennedy admits he stole off her phone. The big question however is why did she record Jax to begin with? Faith claims it was an accidental recording.

“So this is the thing. I do music. I record music. Music is my life. So when Jax came in I was writing music. I use my memos to record my music. I didn’t have time to go ‘let me check the room for cameras and audio.’ It just kind of happened, so it caught the conversation,” she says.

She does admit she told James about the recording which led to it getting out. And while some details of that awful recording have been revealed, Faith goes into further detail about what Jax told her about Brittany.

Faith then sort of warns Brittany about Jax’s reckless behavior which includes the fact that he failed to use protection during their sexy times together.

“The action of it is just terrible. To go into a situation and to not offer to use protection,”  shares Faith.  “I’m one girl and I’m hanging out with people who are close within your vicinity of friendship. Who knows what you’re doing outside of me with the DMs you really get from women.”

Finally Faith is asked if her hook up with Jax happened more than once, and she makes it clear it was only a one-time event but not due to lack of trying by Jax.

“Yes, it was the one time… it could have happened more times, but… I was turning down his advances,” she says. “He texted me about hanging out again and at that time I kind of felt like I needed more information, so I held off and I’m really glad I did ‘cause it could have been way worse.”

As for why she hasn’t appeared in any more episodes this season, Faith says it was her decision as she couldn’t handle dealing with all the drama.

The video of Faith’s interview is below.

TELL US – DO YOU FEEL SORRY FOR FAITH IN THIS SITUATION?