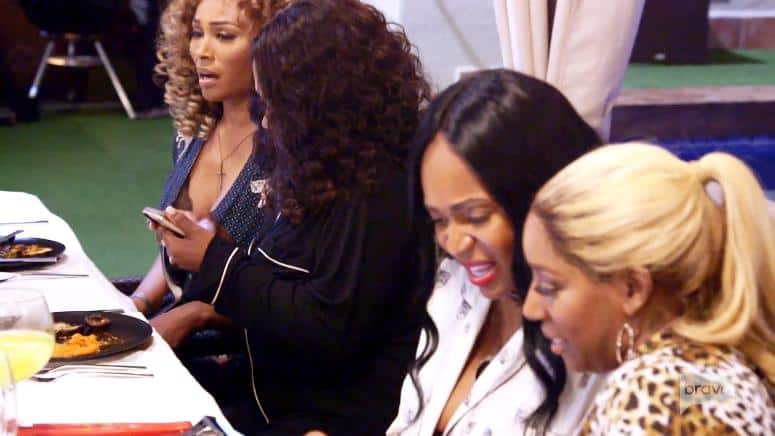 It’s been said that the definition of insanity is repeating the same behavior again and again, and expecting a different result. There is perhaps no better example of this than the cast of The Real Housewives of Atlanta, and their girls trips.

No matter how far away they are from Atlanta, or how tranquil and beautiful the location, the trips are inevitably a disaster, but for some reason they just keep trying.

On last night’s episode, the peaches touched down in Barcelona, and it was clear from the beginning that this trip wasn’t going to be any different.

The first mistake they made was inviting Marlo. This woman is absolutely desperate to hold a peach of her very own, and she loves to stir the pot…even when the stove is off, and the pot is empty.

She started in on Kandi almost immediately, offering to give her an “etiquette class”.  According to Marlo, Kandi is “too dry”, and aloof, and not friendly enough.

Kandi declined, of course, saying that Marlo is the very last person who should be criticizing anyone’s etiquette, and pointed out her habit of  saying outrageously inappropriate things to people whenever the mood strikes her.  She’s not wrong.

The ladies moved on to discuss Kim. Both she and Kenya had opted not to go on the trip, and really, who can blame them? But for some reason, it was only Kim’s absence that bothered NeNe.

Kim has chosen not to travel with the ladies in the past, usually due to one or the other of a host of health issues. For some reason, NeNe has her doubts about these ailments, and said Kim would have to be “Bionic Barbie”  to have overcome everything from blood clots to heart surgery to cancer.

NeNe also took a shot at Kim’s rather codependent relationship with her husband, Kroy, saying that Kim wouldn’t go anywhere, or do anything without him.

New friend to the group, Eva Marcille was  also invited on the trip, as was on again, off again friend, Shamea, and even that went south. As Eva was telling the ladies about her boyfriend, Shamea asked how he felt about her “dating women, as well”. Okay, I guess that’s one way to break the ice!

Eva was visibly startled by such a bold and intrusive question from a virtual stranger, and asked Shamea to clarify. Shamea said that she’d read a story online about Eva’s relationship with rapper, Missy Elliot. Eva denied dating Missy Elliot, but had no problem admitting to dating women in the past. She just didn’t understand why the conversation had to be so messy!

Poor Eva is getting quite the initiation into the group! You may remember that her introduction to the ladies didn’t exactly go smoothly. Eva caused a huge stir when she revealed that Cynthia’s new boyfriend, Will, might already have a girlfriend. To make matters worse, Porsha had bolstered Eva’s claim by saying that she had heard the same thing.

This caused a great deal of stress and for Cynthia, and since Will denied it, Cynthia wasn’t sure who to believe. When talk turned to Will said she wasn’t upset with Eva, but that she’d only known her for “five minutes”. As for Porsha, Cynthia knew her, perhaps a little too well.

Cynthia said that this wouldn’t be the first time that Porsha had made unfounded claims against a man she was involved with. After all, Cynthia reminded her, she’d made cheating allegations against Peter. And, of course, there were the rumors Porsha had perpetuated about Kandi and Todd planning to rape her, Cynthia pointed out.

Porsha was shocked. She’d been under the impression that she and Cynthia were in a good place with one another after their trip to Houston had gone so well.  She assured Cynthia that she wouldn’t help her out again by telling her what the streets were saying about Will, and would leave it for Cynthia  find out the hard way. Sheesh! All this and they hadn’t even checked in yet!

Arriving at the villa only lead to more petty squabbling. The accommodations, though lovely, were not up to the ladies’ standards….not enough bathrooms, small bedrooms, blah blah blah. NeNe tried to pull rank, and insisted that Kandi switch rooms with her since Kandi’s was larger. Marlo, who seemed to be actively gunning for Kandi at this point, jumped in to take NeNe’s side. When Kandi ultimately told them both where to go, and refused to switch, they called HER a spoiled brat!

NeNe should have been more concerned with what was going on in Porsha’s room, because she and Sheree, the self professed tea spilling, “bone collector” of the group, were on the phone with Kim, filling her in on EVERYTHING.

So Kim heard all about what NeNe said about her marriage, and her health, and she was pretty fired up. But she became positively incensed when she found out that Ne Ne had said she was a cancer survivor.

Kim said that she was not a cancer survivor, and had never said she was. She then went on a profanity laced tirade about NeNe, and told Porsha and Sheree to “stand by” because it was “not over”. Well, at least Sheree would be able to breathe.

As the ladies sat down to dinner, they all began getting texts from Kim. The texts accused NeNe of making a mockery of Kim’s health problems, and included a video her daughter, Brielle, had taken in Ne Ne’s bathroom that appeared to reveal a cockroach infestation.

NeNe went ballistic, of course, and insisted that Kim was simply jealous of her beautiful home, with its brand new furnishing and fabulous amenities. She then proceeded to call Kim every name in the book, and accused her and Brielle of planning to humiliate her.

After several minutes of this, it finally occurred to someone to ask just how, exactly, Kim had found out what NeNe said. Sheree, almost gleefully admitted that she had been the one to make the call.

This revelation didn’t appear to upset NeNe, or even surprise her, really, and the show faded to black with NeNe still ranting about Kim.

See what I mean about these trips?! This was just day 1! Surely, it must get better from here, right? It certainly doesn’t look like it. Scenes for next week’s episode show a confrontation between Porsha and Marlo that may rival any in RHOA history. Stay tuned!

TELL US – WHAT ARE YOUR THOUGHTS ON THE RHOA RECAP & LATEST EPISODE?