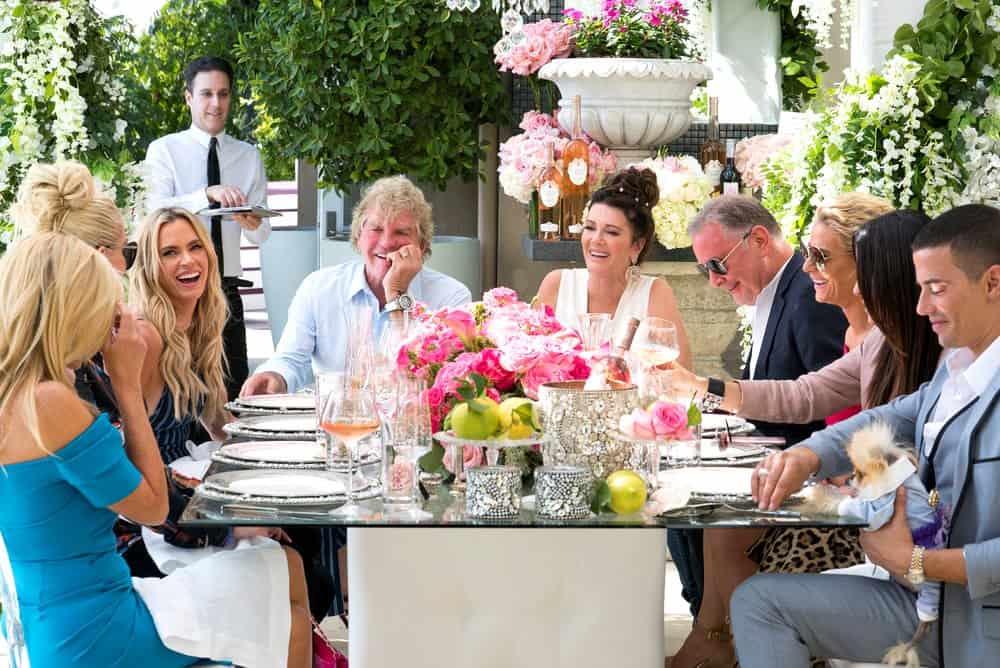 Drama, drama, drama. It never stops with the Real Housewives of Beverly Hills.

Just your average weekday in Beverly Hills…lingerie shopping. Rinna and Camille, two girls about town, meet up to model the latest lace numbers. Camille is in remission for four years and she looks and feels great. The goal of this shopping spree is for Camille to get her mojo back and feel comfortable in her own skin. She explains to Rinna that she “now has the vagina of” let’s just say a much younger woman due to her past issues. Holy TMI, but you go girl!

Leave it to Rinna…”You have a new boyfriend, let’s give him a treat.” Therefore, BOTH of them decide to just throw on some sexy garments, masks and headgear included. Something tells me Camille is feeling herself after her mini fashion show. I’m pretty sure Rinna has a massive girl crush on Camille, and Camille manages to spend nearly $1,400.00. Like I said…just your average weekday.

The ridiculous lives of the RHOBH women continue…Kyle and Erika have a lunch date, completed dolled up and naturally, Erika is “Mikey-styled.” The women continue to recount the whole LVP/Dorit issue because we all know that nothing is truly ever over in Real Housewives world. They also worry about what to get LVP for her birthday. Hmmm…What DOES one get someone who truly has everything? Good luck with that, girls.

Meanwhile, Dorit and PK talk business. Correction: “couture-line of swimwear” business. PK suggests that Dorit make her swimwear a bit more attainable…ya know, for the everyman. Dorit looks absolutely appalled and PK continues on stating, “I don’t like the name Nava for the swimwear.” He instead suggests “Beverly Beach.” Dorit finds herself in a tricky situation, as her hubby, of course, is funding the entire project and therefore, kinda sorta has the final say. Dorit can hardly take it and does her best to play the damsel in distress role, something she is clearly very familiar with. To try and take the heat off of the swimwear changes, she begins to embellish the LVP in NYC story, but PK doesn’t wanna hear it. He just wants to make sure that LVP, his longtime friend, has an excellent birthday.

In other news, Erika, Teddi, and Kyle all pile into a limo and head on over to Camille’s house for the Foundation for Women’s Cancer event. Am I the only one who doesn’t have a sense of what day of the week it is? At the party, Camille explains that she is displaying perfume because the funds go to the cancer foundation. I think it’s a great reason to have the ladies get together and talk drama…I mean foundations.

Dorit has her own agenda in mind for Camille’s party. She is taking this event as a chance to make up with Lisa, for once and for all. “I am going to inject her with so much Dorit love that she is going to explode.” Translation: Dorit is just gonna kiss her booty in hopes that LVP will forgive and forget. The women cheers to “tingly vaginas…..and a cure for cancer.” Whilst the women are throwing back cocktails, Dorit, queen of the awkwardness, decides that the proper time to bring up the LVP situation for the 30th time would be at the party. Not here…not now. Dorit tries her darndest to fix the issue, but truly, she is just making it much, much worse. Somehow, TEDDI becomes the bad guy for not “taking ownership.” Clearly, Dorit is grasping at straws here. #scapegoat. The blame game is strong RN.

Despite the drama brewing behind the scenes, Camille makes a heart-warming speech about cancer and explains how cancer runs in her family and therefore, the foundation is very near and dear to her heart. I just wish these trolls would realize how petty their BS is and that Camille’s speech puts everything in perspective. Alas, it does not. In fact, it is evident that Dorit is being “over dramatic” and is taking this opportunity to have a one on one with LVP.

I LOVE how LVP basically tells Dorit to sit down, shut up, and stop bringing Teddi into the entire situation. Dorit proceeds to straddle LVP so she does not get up and walk away. Uhh…stage five clinger, 911. Dorit, just stop. LVP is not impressed by this bizarro show of affection and lets Dorit know, “You might love me. You just don’t love me enough.” LVP for the win.

The next day, Teddi, the “accountability coach”(even she realizes how ridiculous her made-up job sounds), meets up with a client at some sorta sweat-sloshing facility. Again, what day of the week it is and how do these women survive in the real world? Teddi truly demonstrates how important “ownership” is and uses this segment to hit Dorit with a back-handed blow, but sadly, Dorit is too dumb to even know it.

Erika has some HUGE news, ya’ll: “I’m gonna be a character in the Kim Kardashian game.” Stop. It. Right. Now. Mikey, Erika’s creative director, is fan-girling so hard and we can sense his disappointment that none of the Kardashian’s are actually at the meeting. It’s actually quite cool to see Erika get emotional— her husband may get into an accident, the girls may be calling her terrible names, but homegirl never cries. Now…make the girl into a Kardashian avatar and wam-o, waterworks.

Later at LVP’s beauty of a home, Kevin Lee (her rude party planner- see Vanderpump Rules and Katie) preps for her birthday bonanza. LVP decides to play a trick on Dorit by giving her a glass that is obviously the wrong type for the drink she will be having. LVP’s got jokes! Teddi and her husband Edwin are the first to arrive to the party, followed by PK and everyone’s least favorite housewife, Dorit. The rest of the ladies finally roll in, minus Kyle (who will be coming late) and Rinna (who is sick). LVP begins to open her presents ala 2nd grade girl at her bday party and uses the presents received as a baseline for friendship. Very adult.

LVP isn’t the only one with jokes in this crowd. Camille brings Dorit a present, too…a sexual gag…literally…hopefully Dorit will get the message to “shut your mouth, b*tch.” Dorit’s not happy. Erika, who experienced this same type of “cheeky” gift in the past from DORIT states, “If you, Dorit, do not laugh this off, I am going to crucify you. You cannot cry right now.” Seems like someone can shell it out, but not take it. That’s, unfortunately, not the way it works.

LVP also invites the crew to Pump to continue the celebration, but salty Dorit states “she didn’t expect to come to the birthday and be the punching bag.” Dorit claims there has been enough “celebrating” and has had it with the birthday girl. She is “done” being “poked at nonstop.” Dorit makes an incredibly awkward exit (and forgets her “gag” gift…get it??), which in turn makes LVP chase after her to make sure she is ok. LVP has to do this at her OWN birthday party. What is wrong with this situation?

A bizarre scene change occurs at the very end where LVP is at the BH photo shoot, showcasing her jewelry. This time, the model looks like the “brand” and LVP states she picked the right model *this* time. Ouch. Do you recall the previous model…..DORIT??? She even goes as far to say “PULL THEM,” and by them…I mean alllll the Dorit photos. “That’s history…this is now. Let’s move forward.” Easier said than done photographer lady.

This is just a recipe for disaster and one can only guess how Dorit will react to this… Like Kyle said during the episode, it would appear this is Lisa’s way of punishing Dorit for all the previous smack talking. For the time being, Dorit remains in Lisa’s dog house.

TELL US – WHAT ARE YOUR THOUGHTS ON THE RHOBH RECAP & LATEST EPISODE? DID LISA GO TOO FAR IN “PUNISHING” DORIT?