The ongoing drama between Real Housewives of Beverly Hills stars Dorit Kemsley and Camille Grammer is now spilling onto Twitter!

Over the weekend, the two Bravo reality stars engaged in a Twitter war that even prompted Camille to ask Dorit if her account had been hacked. And the answer is no, Dorit was NOT hacked.

It all started when Camille, 49, tweeted to a fan that Dorit wasn’t having a tough season this year as Bravo is doing her favors by not airing most of the ridiculous things she said during filming.

Camille wrote, “Brandi and Dorit did not have tough seasons. Omg they were spared a lot of ridiculous things they said and did Weren’t aired. #spared.”

Dorit, 41, didn’t take too kindly to the implication that she is even more obnoxious than editing is letting on and fired back at Camille!

Dorit tweeted, “Really!? Like what @TheRealCamilleG? what ridiculous things have I said that were spared?? You must have an inside scoop that I’m unaware of?”

You were spared some of the comments you made at The Project Angel Food event. Omg.. if some of those comments were aired even Kyle was concerned 4 you.

Camille fired right back at Dorit, by writing: “You were spared some of the comments you made at The Project Angel Food event. Omg.. if some of those comments were aired even Kyle was concerned 4 you.”

Things took a turn for the uglier when Dorit called Camille “pathetic” and told her to get a hobby.

Camille was taken aback and actually proceeded to ask Dorit if she had been hacked, tweeting: “Is this really you Dorit or is this a fake account. You sound terrible. Disrespect [sic] tweet.”

Dorit did not respond, and Camille later tweeted that despite all of Dorit’s words and actions which includes calling Camille the c-word, she doesn’t believe she did it out of malice.

“I don’t believe it was malicious. But the her choice of words were in poor taste,” wrote Camille.

Below are screenshots just in case any of the above tweets gets deleted! 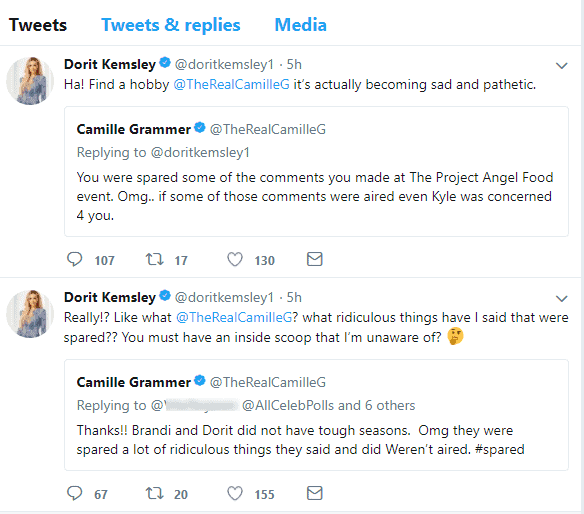 A new episode of the RHOBH airs Tuesday night on Bravo at 9/8c.

TELL US – THOUGHTS ON THIS TWITTED FEUD BETWEEN CAMILLE & DORIT?