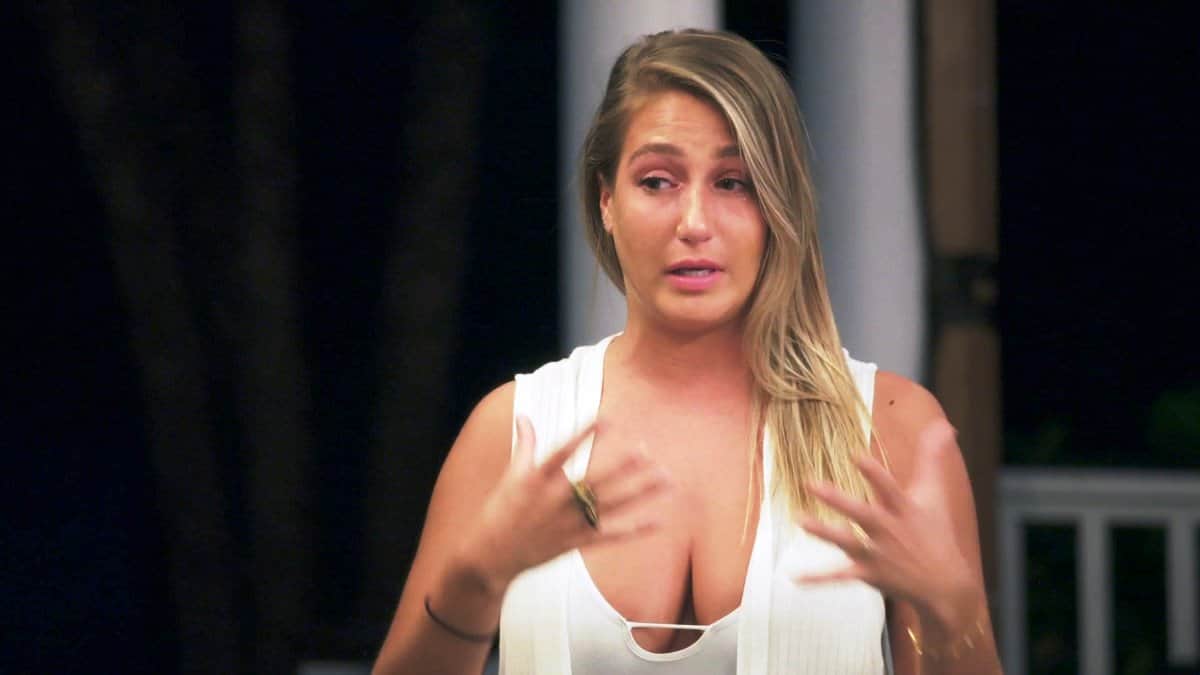 We are treated to the continuation of the Kyle/Amanda fight from last episode of Summer House. Just a refresher, according to Kyle, “summer should be fun. Amanda- not fun.” Amanda is left crying. Kyle is still raging.

While everyone is figuring out the rest of the night, Kyle passes out at 10:57. So much for summer being fun, huh? But then…SURPRISE. He comes back from the dead to find Amanda (still) crying in the hot tub. I don’t blame Amanda really. Kyle drunk proposes to the girl every other night.
The rest of the house parties until the wee hours of the morning and it seems like all’s well in Stephen-land. Turns out that Travis, his new man, does actually like Stephen! At least someone can experience reciprocated love in this house.

Carl and the other Lindsay (just to clarify: this is a brunette Lindsay- not to be confused with house-mate Lindsay. From this point forward, Carl’s girl will be calls BL- brunette Lindsay) are up late. That’s because Carl was barfing all night due to one bad “mussel.” Keep telling yourself that, guy. Also, you may not want to publicize the fact that you can drink rose all night and be perfectly fine. That’s not quite a brag-worthy feat. Like, my mom can do that.

The next morning, Danielle is still unemployed and Carl evidently has sausage fingers. That’s about as exciting as this segment gets. The Amanda and Kyle fight has now become a “house” issue. Stephen claims that he doesn’t believe that Kyle truly wants a relationship and that the couple needs to stop brushing the issues under the rug. He does have a point… Like clockwork, the gang packs up and has an extremely awkward car ride back to the city, courtesy of the love sick duo, Kyle and Amanda.

Monday- Stephen goes on a date. Tuesday- Danielle calls her mom and has a second interview. Wednesday- Lindsay is working and it appears as though she forgot her cami. Thursday- Carl meets BL for a daytime date. Big moves! But Carl isn’t the only one on a Thursday date. Kyle shares with Amanda that doing a relationship in the Hamptons is different than doing a relationship in the city. I don’t really see his point, especially because he is 47 years old and should be able to behave like a human. Amanda holds strong and states that if things don’t change, she is done. Kyle is FAreaking out because he is worried about losing his party boy identity, not his girlfriend. He comes up with a genius plan. “What if next weekend we go drink for drink?” Yea. No. Amanda- I hope he’s keeping up with you, otherwise, you’re gonna be a goner.

Friday: Lindsay meets Everett. It’s all very dramatic and I am pretty sure that Everett slow-mo walked into the café whilst a fan blew his tousled hair just so. Lindsay pretends she doesn’t like him and I think it’s because he isn’t wearing his red-coat costume. I mean, when he had on that get-up, she couldn’t keep her hands off of him. Everett states that he is “here and he is not leaving,” but Lindsay makes it clear that she is moving on “right now.” Take that, Everett. Lindsay, the “boss b*tch, empowered woman,” exits and leaves Everett ugly crying.

And just like that, the gang’s all back in town, ready for another Hampton’s weekend. It’s kabob night, ya’ll! Oh, and the Wirkus circus is back to “send it.” That’s right- Ashley, Lauren’s twin, is joining in this weekend’s fun. But if they say “send it” one more time, I am gonna lose it. Lauren shares that she has moved on from Carl and Stephen explains that she is on “step 8, which is ‘find new d*ck.’” Thank God for Stephen. That guy’s always keeping it real. On Kyle and Amanda’s drink for drink plan: “If you really need to monitor your boyfriend’s drinking that much, maybe you need to 1. Be more fun or 2. Get a new boyfriend.” I mean, Stephen’s really “sending it” with his commentary.

Welp, this drink for drink plan is stinking up the joint. I could have told you that that was not a good idea. Before we know it, Kyle and Amanda fight yet again and Amanda is embarrassed cuz “people” (aka the roommates) are talking about the crumbling relationship. In the middle of all of this, Danielle shares that she got a new job, but the news gets brushed aside as the fight heats up. Everyone’s pretending that everything’s ok, but of course Ashley needs to butt into the situation. That opens the flood gates. All the roommates begin laying into Kyle. Lauren claims that no one is judging Amanda, but then here comes the “typical Wirkus machine gun.” The twins spit out comment after comment. But strangely enough, after being the ones who stirred up the drama, the Wirkus’s decide to “change gears” and talk about the Rose all Day party. I can hardly keep up with their train of thought.

Everyone in the house goes out to, you guessed it, “send it.” But during Carl’s toast, Stephen legit pours out his shot. And not in the “pouring one out for my homies way.” More like in the “I hate you and you disgust me” way. I mean Carl is pretty hateable, but Stephen really shouldn’t waste booze like that!

Carl and Kyle, the self proclaimed “positive energy guys,” play a quick game of tennis. All the while, Kyle wears his mullet wig, because yolo. They bond over the love of the game and then hurry to get ready for the rose party. Watch out, everyone! Carl’s gonna go HARD on the pink wine! On the other hand, Kyle and Amanda are “sending it, but snail mail” style. So far, so good. Everyone’s in a great mood and Carl’s creepily hitting on women, making bad dentistry jokes like “you can’t handle the tooth” and over-sharing that he wears women’s perfume. You do you, boy.

Meanwhile, Lindsay’s new dude Nick roles up to the rose party in his floral print blouse, I mean shirt. They suck face and Lindsay suggests that they “just hit it and quit it.” She is so confused why this guy wants a legit relationship and states that she “just wants to live her best f*cking life.” Right.
Amanda is WASTED and cannot even get into the car. Chances are she is NOT making it out and Kyle is loving that he is not the drunk idiot this time. The house continues partying. Kyle continues pouring beer all over his face. And he is “very conflicted” because he really wants to go out, but knows that if Amanda wakes up and realizes Kyle isn’t there, he is gonna get in trouble with a capital T. It is scary that they ALL leave Amanda all messed up sleeping alone. It is also scary that Kyle actually thinks that hat is cool. There is just so much wrong with the end of this episode.

TELL US – THOUGHTS ON THE LATEST SUMMER HOUSE EPISODE? SHOULD AMANDA DUMP KYLE?