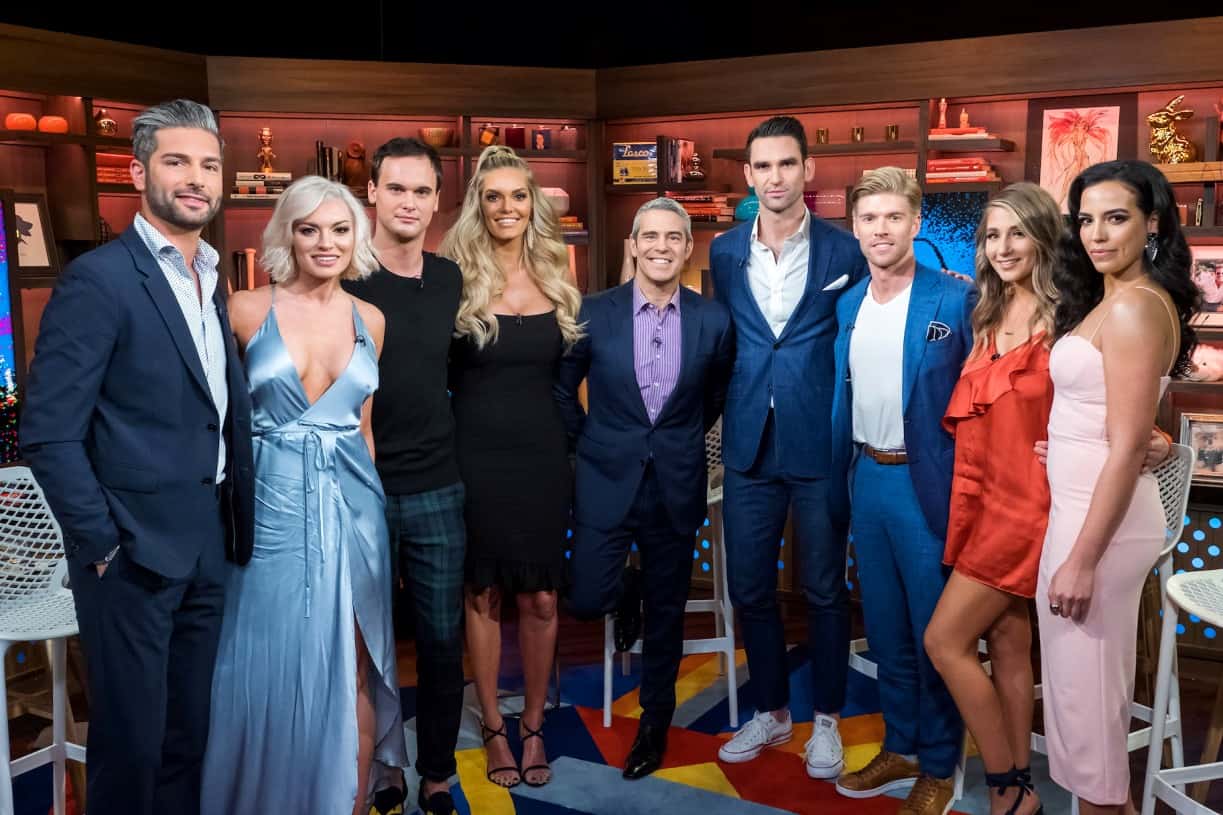 Wow. WHY IS EVERYONE SO TAN? They are tanner than they were in the summer…when this show was filmed, so I’m calling bullsh*t on that glow, girls. I also find it interesting that Amit is even invited to the reunion, as he was barely on the show to begin with. I mean, who IS Amit?!

The Summer House cast gives their personal hello to Andy Cohen and the host wastes no time diving in to find out the inside scoop. A platinum blonde Lindsay introduces her new “friends,” her implants, and she admits to “hanging out” with Everett again. Andy pries and wants to know the inner workings of this volatile relationship that most of the housemates refuse to support. Kyle states that “it was hard to be supportive of that relationship” and Lindsay retorts that the “guy’s in love with me. I don’t blame him.” Riiiiiiiiiiiiight.

Cue Lauren. She wins the award for the snarkiest, loudest, most annoying reunion guest EVER. She talks over people, doesn’t give them a chance to speak, and looks like a wax figure. She has no problem giving her opinion, even when no one asks for it. For instance, whilst discussing the Everett drama, Lauren interjects to Kyle: “Are you friends? When ‘s the last time you hung out with Everett?” Ah, yes. We know you’re there, Lauren. No need to scream for some attention.

How and why does Ashley, Lauren’s twin, keep getting on this season? Is she a part of this cast? She gets more camera time than Amit! I say, pack it in Ashley and get yourself back home to Brad. I’d rather have Brad on the show.

Andy delves into the Lauren/Carl drama and Lauren “gets really upset” when people say Carl is just not that into her. She sounds like a dope and even though Carl says “they have a great chemistry,” it doesn’t seem like Carl has any interest whatsoever in Lauren. Can you blame him?!

The “relationship was built off camera” and Andy actually gets Carl to admit he led her on. Carl is very mature and supportive and even apologetic. Someone has done a lot of soul searching and begins to explain this to Andy- but then alas, gets interrupted by Lauren and Ashley, yet again.

Everything seems to come back to Lauren. She is coming in hot. She talks over people, she has her own agenda, and she very well may be the most annoying cast member.

On a side note: Carl admits to “hooking up with Scheana” from Vanderpump Rules. Carl’s hooking up means making out…so before we all get it twisted, that’s #realtalk.

Anyway, Andy Cohen comes back with a superb line to describe Carl and Stephen’s friendship: “SP-Fed up.” Carl’s the best “head I ever got was from a gay guy” story resurfaces and Stephen is put on the hot seat. Stephen explains that the reason he brought the story up again was because Carl is a “pleaser” and just says things to fit in with certain people. Carl comes clean with the truth. “I was 22 years old and I was acting…and I got head off a gay guy. Fact.” LAUREN- WHY ARE YOU TALKING? This is an ABC conversation between Stephen and Carl and you need to C your way out of it.
Later, Andy talks to Stephen about his family situation. Poor Stephen. Andy states that “It’s sad to watch” his parents and Stephen retorts that “It’s sad to live.” Due to his parent’s religion, they do not accept his homosexuality. Despite their beliefs, they do truly love Stephen, but it is a hard pill for him to swallow.

Kyle and Amanda came out of this summer house #stronger. Seems like it. They are NOT living together because then where would Kyle store his mullet wig and booze? Kyle admits that he needs to practice “moderation,” but he does NOT have a drinking problem. Amanda “wants to make it very clear” that she “doesn’t want Kyle to change,” however, she wants him to change, ya feel me? Lauren lights up when Kyle dances around Andy’s question about marriage to Amanda. Lauren is salty cuz she never gets to hang out with Kyle and she believes that “going out doesn’t fit the dynamic of their relationship.” Hooray for Amanda attempting to silence the Wirkus circus, but that doesn’t work out very well.

Amanda claims that she is the one trying to reach out to the other girls in the cast. The girls state that Amanda ONLY wants to hang when Kyle is out of town. Yes. That’s how it goes, ladies. When you guys…I mean IF you guys…ever get boyfriends, then you’ll understand how it goes.

Lauren states, “your girlfriend needs to speak up if she wants to be heard” and I kinda think Lauren is just straight up jealous. She believes that Kyle needs to be more “humble” when it comes to his relationship. At the end of the convo, Kyle reports: “Relationship is rock solid, by the way. Friendships…” not so much because of the tension felt from the group.

Amit says one sentence only, but it is a bold one: “This feels pretty tense.” The guy’s dead on and now I COMPLETELY understand why Bravo asked him to be a cast member. Siiiiiiiiiiiiiiiiiike.

The final hurrah with the cast is as awkward as the season. Ending with regrets is always an uplifting way to wrap up a reunion. Lauren believes that the crew is a “dysfunctional family” and evidently, Lindsay is the house president. She tells Amanda “you have three months [to be our friends], so let’s see how you do in the next three months.” I’m sure this crew will be signing up for yet another Hampton’s sh*t show for summer 2018…let’s just all cross our fingers that they clean house and make Amit the star next season.

TELL US – WHAT ARE YOUR THOUGHTS ON THE REUNION AND THE 2ND SEASON OF SUMMER HOUSE? DO YOU WANT A 3RD SEASON?