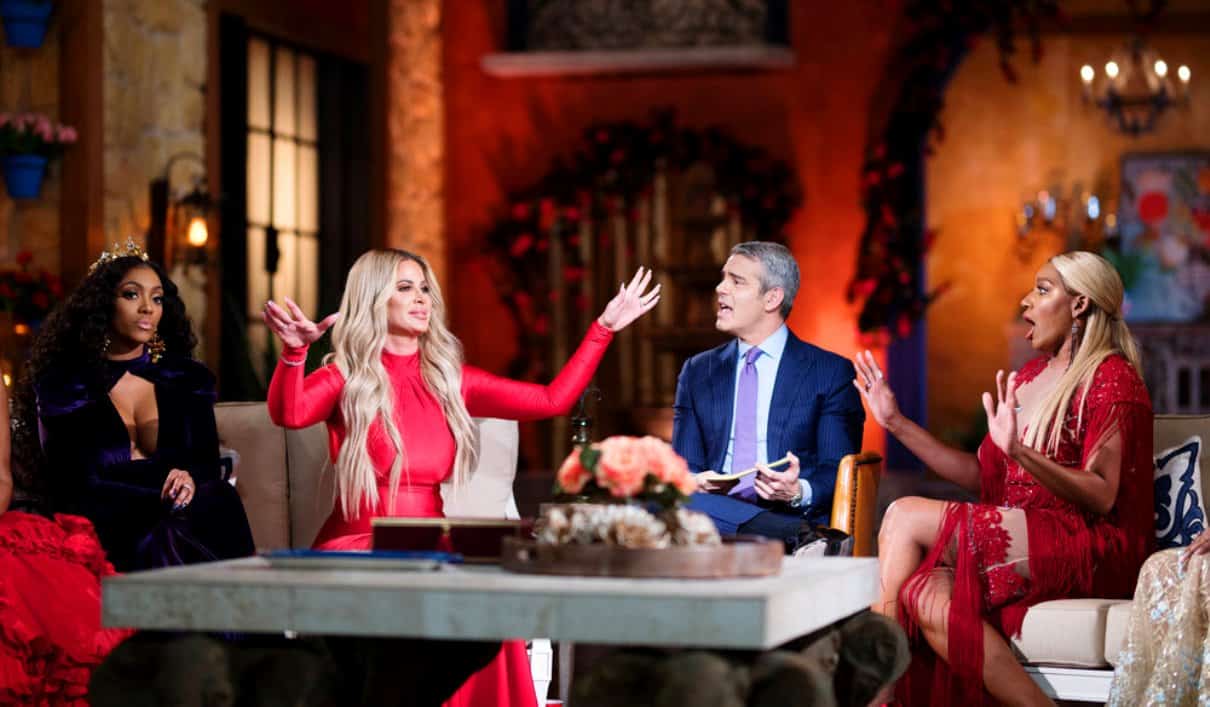 The second installment of the Real Housewives of Atlanta reunion aired last night, and although it was fairly tame in the beginning, it ended with a bang!

When we picked up with the ladies, Marlo was still with them on the couches, and the conversation turned to her fight with Porsha in Barcelona.

Marlo had clearly been gunning for Porsha that day, shading her for everything from her outfit to the welcome mat on her porch (yes, it got THAT petty).

Porsha handled it in stride until Marlo brought up Porsha’s issues with Kandi. At that point, Porsha had had enough, and began to tell Marlo so, while waving a fan in her face. It got louder and uglier from there, and the other ladies hustled them out of the restaurant before they were thrown out!

Last night, Porsha said that Marlo was simply “toxic”, and was constantly spreading rumors about everyone to stir the pot. For once, Porsha’s longtime nemesis, Kenya, had to agree with her, saying “how could anyone trust a snake”, like Marlo?

Marlo said that Kenya tried to act as though she was above the drama, but that, in fact, she was vicious and lied constantly, including implying that Marlo was a prostitute.

Kenya’s far from the only cast member to say this about Marlo, and it begs the question: how DOES Marlo afford her fabulous lifestyle?

According to Marlo, she once “dated a billionaire”, who was NOT Ted Turner, as the others had originally assumed, and that he had purchased her home, her mother’s home, and many other lavish items. She said she also owns “several businesses”, including the ambiguously named Simply Marlo LLC.

Once Marlo took her leave, the talk turned to the long dead horse the women have been beating all season: the allegations Porsha made last season about Kandi planning to drug and rape her. Yes…that again.

Kandi said that all of Porsha’s attempts at apologizing had come with an excuse, and that while she understood Porsha had been lied to, she should have known the allegations were ridiculous, and not repeated them.

Porsha apologized one more time..this time without any “buts”, and, in the interest of putting the whole sordid incident to bed, Kandi accepted. Thank goodness! Was everyone bored to death with this, or was it just me?

A very pregnant Eva made her first reunion appearance, and although she claimed she was having contractions the entire time,  she didn’t have her baby until April, almost a month after the reunion was taped. Eva did handle herself pretty well.

Of course, she wasn’t in the hot seat for long. The only drama she had all season was with Cynthia, and it was a total nothing burger.

Eva claimed that she’d met Cynthia’s boyfriend, Will, several months before being introduced to him at Kandi’s Essence party, and that he’d been with another woman at the time, whom he’d introduced as his girlfriend.

This became a huge issue for two reasons. First of all, Will told Cynthia that he hadn’t been in a relationship in a couple of years, and secondly, because the other ladies were already suspicious about Will’s intentions with Cynthia, and feared he was an “opportunist”.

Eva maintained that regardless of what Cynthia thought, she had been telling the truth, and didn’t appreciate Will implying that she’d made the whole thing up.

Besides, Eva wasn’t the only one warning Cynthia that Will may not be what he seemed. Porsha had backed up Eva’s story, and told Cynthia that she’d heard the same thing about Will “from a friend”.

Porsha said that she’d tried to reach out to Cynthia to apologize for upsetting her, but had never gotten a response. Cynthia said that she’d meant to respond, but had “still been in her feelings” at the time.

She also said that she wasn’t really inclined to believe Porsha, either, because she’d spread plenty of lies over the years, including baseless rumors about Cynthia’s ex husband, Peter, and of course, the whole ordeal with Kandi, which we will NOT discuss again.

As it turns out, the whole Will issue is now moot, because after all that drama, Cynthia isn’t even dating him anymore. She’s dating a new man, whom she likes, but declined to elaborate on.

See? It was pretty tame for a while, but then, as Kenya described, it suddenly got colder and a little darker, as Kim took her place on the couch. Kandi predicted things would blow up in about 10 minutes, but it didn’t take nearly that long.

Kim has had issues with almost all of the women at some point, and  immediately got right back to her old tricks as soon as she returned to the show this past season.

For some reason, she’d  zeroed in on Kenya, and slammed her marriage, saying that Kenya’s new husband didn’t exist. Needless to say, Kenya wasn’t pleased, and the two women nearly came to blows.

Last night, Kim said she “doesn’t know Kenya, and doesn’t want to”, before turning her back on Kenya, who said the feeling was “completely mutual”.   Kim never really had a relationship with Cynthia at all, but that didn’t stop her from trashing her.

When Cynthia had tried to defend Kenya, Kim told her to “shut up, and look pretty”. She also told Sheree that Cynthia would never have been successful without her good looks.

When Kim was called out for her unkind statements, she initially tried to deny she ever said them, and, of course, Sheree backed her up, and claimed to have no recollection of Kim saying anything about Cynthia.

But the good thing about living your life on reality television is that you can always go to the video to prove someone is lying.  After literally watching herself saying exactly what she was accused of saying, Kim quickly justified it by pointing out that Cynthia had made a fortune as a model and that, therefore, her success WAS due to her looks. As far as the rest of it, she simply felt Cynthia had “no backbone”.

But last night she did, because she turned to Kim, and said she felt she “had no class”. Check and mate!

Things took a far worse turn when host, Andy Cohen, steered the conversation toward Kim’s relationship with NeNe. These two have gone from bff to mortal enemies, and back again, many times over.

Right now, they’re in an enemy phase. They’ve argued all season, each time more petty than the one before, and last night Kim was called out over pictures she took of NeNe’s car in a handicapped parking space.

Kim’s story about the day the picture was taken has changed several times.  First, she said she saw NeNe, then she said she only saw NeNe’s car, only to change it up completely last night, and claim that she wasn’t there at all, and that someone else took the picture and sent it to her.

NeNe lost it! It was a bit difficult to make out what NeNe was saying in the midst of all the bleeped out cursing and non-stop yelling! She read Kim up one side and down the other, calling her jealous, a liar, and pretty much every other name under the sun.

It ended there, but only for tonight. Scenes for next week show Kim storming off the stage, vowing never to return, and NeNe answering Tyrone’s claims that she “stalked” him. Stay tuned!

TELL US – WHAT ARE YOUR THOUGHTS ON THE RHOA REUNION PART 2?