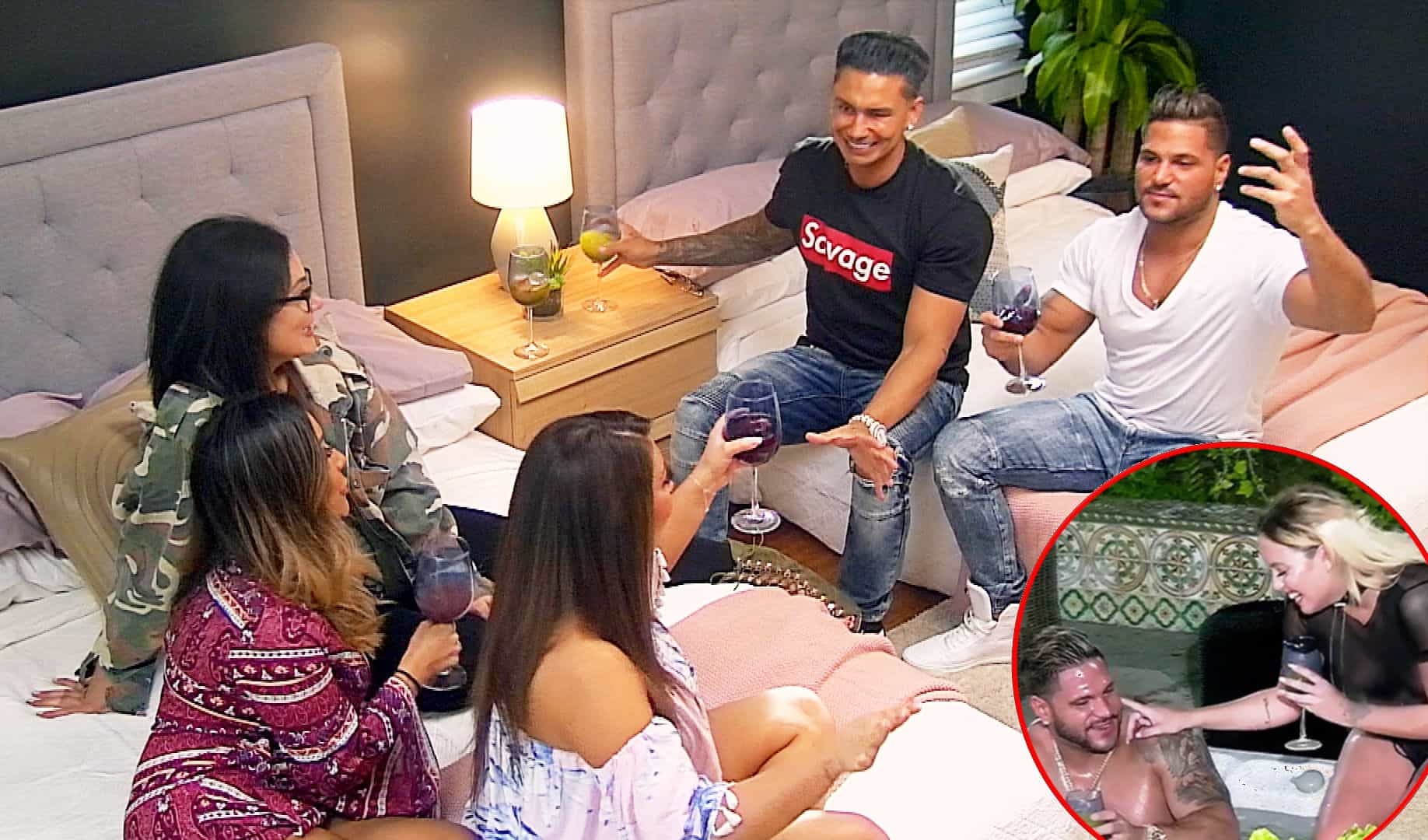 Late night fights are never a good idea, especially after a long Sunday Vinday. You would think the Jersey Shore gang would know this by now, but alas, where’s the fun in that?

Now that JWoww and Snooki are at each other’s throats, the chaos is real. Evidently, JWoww is “ruining” Snooki’s marriage, but it seems more likely that Snooks is just wasted and “literally losing her f*ckin mind right now.” The issue is that since the season is back, Snooki hooked up with Vinnie and now Snooki doesn’t know how to handle the awkwardness and fears of disrespecting her guido hubby. When JWoww intervenes to try and get Snooki calm, Snooki calls JWoww an idiot and all hell breaks loose. The Sober Situation, in his “humble AF” t-shirt, manages to try and escape the issues, but the girls are too fired up for him to find serenity now.

JWoww shrieks that because she is sober…correction, “Kinda…sober. Tequila’s my friend…” (Hey, at least you have tequila, GF. Who needs Snooks when ya have Jose Cuervo?)…she can handle fighting better. For the second time in the three shows aired, Snooki states that she is leaving. She is legit like the boy who cried wolf. Are ya leaving? Are ya staying? “If anybody in this entire house needs Pauly D positivity, it’s Nicole.” Pauly is the man. He pours Snooki a tall glass of Yellow Tail and listens to her hopes and fears. This is the most awkward fight and make-up segment, as Pauly acts like the peacemaker between JWoww and Snooki. The two girls embrace and apologize and it seems as if Snooki is staying—all is right in Miami tonight.

Now if only Vinnie can make amends with Snooki. The poor guy just wants to know what the “Vin rules are” and Snooki finally comes out to talk shop, whilst Vinnie remains in the hot tub. Because that’s not awkward. Snooks admits that she was “annoying and dramatic” and the apology finally comes. Thank God. Can we get these guidos and guidettes to a club already?!

GTL time, ya’ll! The whole crew heads out to “gym, tan, and laundry,” except for Deena, who believes going to the gym and doing laundry on vaca is weird. I’m going with you, girl. In the car on the way to the gym, JWoww and The Situation talk about the legal issues The Situation faced. We learn that he “doesn’t necessarily speak” to his other brother. It seems as if his own bro is trying to sell stories about him on TMZ. Ridic. JWoww shares that she feels really bad about the situation that The Situation is in. I’m not sure if she’s talking about his family problems or The Situation’s new gym routine. Let’s just say I know women in their 50’s that can hustle faster on a treadmill than The Situation can. Hey, at least the tanning bed works!

Later that evening, the roommates decide to “spiral.” “Let’s make some RonRon juice.” The guy whips out a “succulent, smooth watermelon” to create the cocktail he is most known for, but a night on the juice leads to a night of mania. Ron, naturally, can’t stop talking about Sam, his ex girlfriend and ex roomie. Pauly D states that, “hearing Ron talk about Sam is giving me flashbacks…it’s like I’m a battered child.” Deena desperately tries to defend Sam as Ron bad-mouths her … and he seems to be obsessed with his ex, even though he is about to father a child with a different woman. Heavy.

Everyone gets ready for the night out…denim vests, blow outs, steamed clothing…and that’s only the dudes of the house. The cabs are here and they head out into the Miami night, full of RonRon juice and hair gel. While the MVP (Mike-Vin-Pauly) cab laughs and chats on the way to da club, Deena and Ron are legit about to brawl…all because of…you guessed it: Sam, the sweetest b*tch you’ll ever meet. Deena thinks the Sammi doll is inappropriate and she doesn’t like the way Ron talks about her “friend.” It’s not a good plan to have RonRon juice and head into a club angry. It’s like going to bed angry. It’s just wrong on so many levels.

On being sober and taken at da club, The Situation explains that “it was like I was in the matrix and…I was dodging the booty.” Yes, he really said that. Now, unfortunately the rest of the group isn’t as lucky with the stiff-arm. Deena gets triggered by these rude girls who keep trying to invade their club space and it doesn’t take long for a full on brawl to ensue. There’s pushing, there’s ice throwing, and there’s Vinnie dumping Champagne on the outsiders. Finally, the bouncers remove the trouble-makers (the rude girls, not Deena and Vin) and the crew can go on fist pumping freely. Phew.

Meanwhile at the club, JWoww serves as the best wingwoman for the only single dude in the house, Pauly. She brings over some babes, but obviously, Ron decides to get in on this action. “Ronnie is full-tilt right now” and decides to invite all of the new “friends” back to the house. Ron has his eye on one lady in particular, a French blonde and all of the roommates think this is the worst idea ever…because it IS the worst idea ever. Everyone is staring wide-eyed at Ron and it’s just not a good look as the ladies head into the hot tub wearing skimpy garb. “Ronnie is juggling chain saws right now,” therefore, Snooki decides to make the new “friends” some drinks. She makes them super strong in hopes that the Jacuzzi ladies drink them quickly and then pass out…diminishing any fears of Ron accidentally cheating.

Unfortunately, Snooki’s plan back-fired in more ways than one. One girl’s puking and the next thing you know, Ron is giving his French fry a tour of the house…where he manages to stumble up the stairs and state, “this is my room…right here.” And then the door shuts. We hear some heavy breathing, which only leads us to believe there’s some heavy petting going on. When Pauly knocks on Ron’s door to basically be like what are you doing dude, we hear a quick “no thank you” from Ronnie…and then the episode is over. Just like Ron’s relationship when his baby momma finds out about this.

TELL US – THOUGHTS ON THE LATEST JERSEY SHORE EPISODE? DO YOU THINK RONNIE CHEATED?