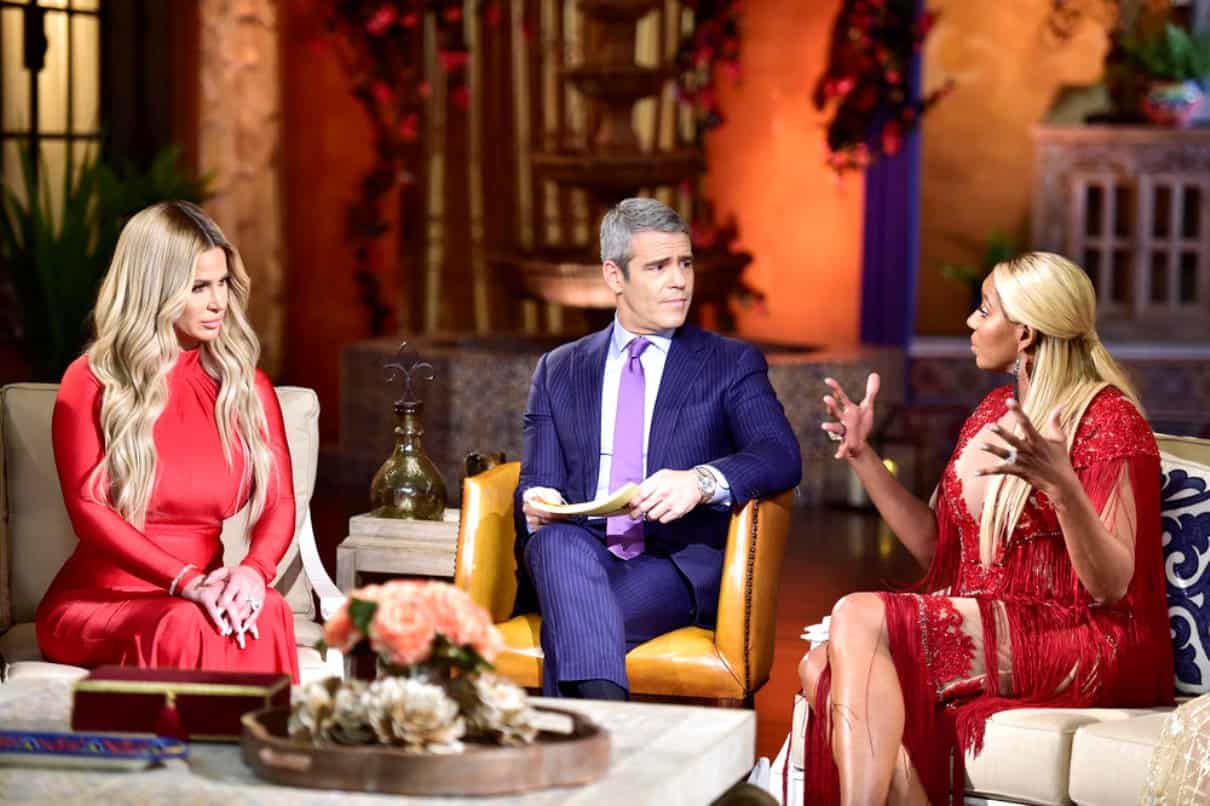 If you didn’t see the final installment of the Real Housewives of Atlanta reunion last night, you missed A LOT! It had everything: intrigue, shocking accusations, and more shade than a swing, hanging from a magnolia tree on a July afternoon, Chile!

When we picked up with the ladies, NeNe was still reading Kim for filth, saying she was jealous, and had a “reckless mouth”, as well as some other things that the censors deemed inappropriate for Sunday at prime time. Kim tried to defend herself, but was mostly drowned out by NeNe’s rant, and in the interest of moving on before the two women were rolling on the ground, and snatching each other’s wigs off, host Andy Cohen steered the conversation to a new topic—Sheree and her prison bae, Tyrone.

This really wasn’t the wisest choice if Andy’s intention was for NeNe to calm down. She has a mysterious, but problematic, past with Tyrone, and although she has claimed to know little about him, she seemed pretty well informed when she told the other ladies he was a “con man”.

For his part, Tyrone said that NeNe came on to him “very aggressively” when they met years ago, and that when he rebuffed her advances, she’d proceeded to “stalk” him, going so far as following him to Philadelphia, a claim that NeNe flat out denied.

But in a strange twist, NeNe DID recently tweet that she’d “s***ed his d***”, which she claims she only said as a “joke” because she’s “tired” of being asked about him.

Sheree was oddly unbothered by all of it. She acknowledged that her man was locked up for wire fraud, but said that she “knows his heart”. She also said that she really doesn’t think anything happened between him and NeNe, who she says “isn’t his type.

NeNe said that she was perfectly happy not being his type, and pointed out that “Lierone” was “perfect” for Sheree. The other ladies didn’t quite agree, and told Sheree they couldn’t understand why she was spending her time taking collect calls from Tyrone when she could have a real relationship.

Sheree assured them that her relationship is plenty real. She said there were all sorts of relationships, and that some began when one party wasn’t completely available, like when women dated men who were married. I think this was supposed to be a defense of the relationship, but it’s hard to be sure.

Andy, king of all pot stirrers, said that this reminded him of NeNe telling Kim to “keep her legs closed to married men” during the very first reunion 10 years ago.

NeNe clearly remembered it fondly, and chuckled, but Kim piped up to say that NeNe had nothing to laugh about because her husband, Gregg was still a married man when she met him.

NeNe denied the accusation, and said that Kim had no idea what she was talking about, but that even if it were true, she had been married to Gregg for 20 years, while Kim spent two decades sleeping with married men,  and “stripping at The Oasis”.

Kim found this laughable, and began bragging about her marriage of seven years, her children, and the fact that she had her own show and a skin care line “worth $15 million dollars”.

The others called BS on that dollar figure, but Kim stuck to her guns, even as Kenya openly rolled her eyes and laughed at her.

This is nothing new. These two will take any opportunity to antagonize each other. It all started last season, during the housewarming party for Chateau Sheree. Kenya and Sheree had  been teasing each other about whose new home was better, and when Kenya started throwing shade at Sheree’s unfinished basement, Kim thought she was just being an “a**hole”, and told her so. This led to a heated exchange, during which Kim told Kenya she was jealous because she had everything Kenya wanted, meaning a husband and children. Kenya assures Kim that  she wasn’t jealous, and made some choice observations about her husband and family.

Kim apparently never got over it, and when she ran into Kenya at NeNe’s white party earlier this season, she began baiting her immediately, saying that her husband didn’t exist, and that she’d faked her marriage to have a storyline. It was a rude, and totally false accusation, and as Cynthia was quick to point out, Kenya had been completely ignoring Kim, but she just wouldn’t let up. In fact, Cynthia said that Kim’s taunting was far worse, and went on far longer, than what aired during the episode.

Perhaps that’s why Kenya’s retort was so harsh. She told Kim to stop worrying about her marriage, and to pay attention to her own life, beginning with her daughter, Brielle, whom Kenya said Kim was “pimping out for concert tickets.” This insult stemmed from a tweet Kim sent to Chrissy Tiegen, asking who “Brielle had to b***” to get tickets to the John Legend concert. It was a joke..I think. But surely we can all agree it was in really poor tast. Hell, even John Legend was uncomfortable with the implication! Kim maintained that she and Tiegen were friends, and that the tweets were all in fun, but having Kenya throw it in her face, and basically call her daughter a ho, had been taking things too far, so she threw a full glass of wine at her!

When the issue was revisited last night, Kim once again accused Kenya of being jealous of her family. But Kenya told her that she’d never want kids like hers, because they were “just like their mother”, and that she certainly wasn’t jealous of Kim’s husband, Kroy, who she said “has no balls”, and “acts like Kim’s valet”. She also called him an “idiot” for “turning a ho into a housewife” when he married Kim.

Damn! Kenya came to play! And she wasn’t finished. When Kim said her husband’s balls were bigger than Kenya’s husbands would ever be, Kenya delivered her final shot, saying Kim had certainly “s***ed enough balls to know”! A little vulgar, sure, but Kim left herself wide open.

Not to be outdone, Kandi also took issue with Kim over her claims that Kandi had “tried to get with her” back in the day, while they were working on Kim’s song “Don’t Be Tardy for the Party”.

Kim initially tried to deny that she’d said it, but Andy was quick to remind her that she’d said it on camera, and cut to the video of Kim telling Sheree that Kandi wanted to “l*** her b*x”. Kim pointed at Andy and whispered, “don’t try to make me out to be a liar”, and dismissed what she said as a “figure of speech”.  Kandi was having none of it, and said that  she had never wanted to get with Kim, whom she said was a bald faced liar. She also said she was angry with Sheree for not only allowing Kim to say those things, but not telling her about it afterwards.

Porsha piped up to say that Kandi shouldn’t be surprised because Sheree had no loyalty to anyone other than Kim, and that she smiled in everyone’s face, and talked behind their backs. She then turned to Sheree, and told her that she was in the “hot seat” now  to enjoy her “moment”.

And quite a moment it would turn out to be! You see, Kim and Sheree talked a lot of trash on their costars that day, and try as they might, they couldn’t deny any of it because it was all on video.

Starting with Kim saying that NeNe seemed like she was  “on something”. When this was discussed, Kim once again tried to downplay it, saying that she’d only meant that NeNe didn’t “seem like herself”.

But it was a pretty damning allegation, and the other ladies jumped to her defense. Kandi, the victim of false allegations, herself, was particularly vocal. She said Kim’s words had been irresponsible, and could have done damage to NeNe’s reputation, similar to what had happened between her and Porsha.

But Kim said it was different, because she’d actually said it to NeNe’s face, and furthermore, Kandi had made damning allegations her own when she said that Kim had a drinking problem.

Kandi said that she’d only been repeating what Kim had said about  herself when she’d explained that Kroy drove her everywhere because she always needed a drink. Kim said that was different than having a drinking PROBLEM, but Kandi shut her down pretty quickly by saying that what Kim had described was basically the definition of a drinking problem.

It was a rough night for Kim, and she was obviously at her limit. But things were about to get even worse because it was time to address “The Roach Video” that Brielle made in NeNe’s bathroom.

Kim claimed that her daughter hadn’t meant any harm, and hadn’t even noticed the roaches until a friend called them to her attention. She went on to say that the video never would have seen the light of day, but when she’d heard about the things NeNe was saying about her, she’d gotten angry, and shared it with the others to get back at her.

NeNe had been pretty upset by the video, but she was incensed when she saw that it was accompanied by a text,  in which Kim described her home as “roach infested”. NeNe deemed the text “racist”, and although Kim said she was “reaching”, and claimed there was no racist meaning behind her remark, the others took NeNe’s side again, and began explaining that it was, indeed, racist.

When Kim said it was “too much”, and announced she was leaving,  NeNe told her to take her “privileged a*s over to “Don’t Be Tardy”, and they all snickered as she tucked her tail between her legs, and sulked her way off the stage.

With Kim gone, Andy began closing the show, but just after the women toasted to “love”, and began saying their goodbyes, the producers announced that Andy was being summoned to Kim’s dressing room.

When Andy arrived, he found Kim dressed down, and ranting over how “unfair” everyone had been, and how she wasn’t a racist, and everyone knew it, but that she’d been forced to defend herself against five African American women, with no one to have her back.

She went on to say that Andy had never found another white woman to be on the show because none of them were “dumb enough“ to do it. Hmm..perhaps it’s just me, but that sounds pretty freakin racist!

Andy tried to console Kim, saying that it really wasn’t that bad. But it was clear that his patience was wearing thin, and when Kim whined that no one said anything positive, he told her  there was a very good reason for that: everything Kim had done all season was “negative and combative”. With that, he simply shrugged, and walked away.

Well viewers, all good things must come me to an end, and that time has come for the landmark 10th season of RHOA. We’re not yet sure what next season will hold, or who will be holding a peach, but we can’t wait to find out. So long, for now, ladies, and thanks for a great season!

TELL US – THOUGHTS ON THE REUNION AND THIS SEASON OF RHOA? WERE THE LADIES TOO HARD ON KIM OR DID SHE DESERVE IT? WILL YOU MISS KIM AND SHEREE NEXT SEASON?