RHONY’s Tinsley Mortimer and Boyfriend Scott Kluth Over Again? She Deletes His Photo Amid Allegations He Cheated

by Lindsay Cronin May 8, 2018 52 comments
ShareTweetWhatsappPinterestRedditTumblrMailFlipboard

Tinsley Mortimer and Scott Kluth recently got back together after a months-long hiatus and now, it is being reported that the Real Housewives of New York City star suspects he may have cheated.

According to a new report, Tinsley made a shocking discovery on her Coupon King boyfriend’s phone last month and right away, a fight ensued.

“[Tinsley] saw sexy photos of another girl on Scott’s phone last month, and she completely lost it,” a source told Radar Online on May 7.

They “broke up for about a day,” the source continued. “But then he made it up to her by whisking her away on a vacation to Maui.”

Weeks later, Tinsley and Scott appeared to be going strong once again and just last week, she shared a photo of the two of them vacationing in Dubai on May 3.

However, Tinsley deleted that photo from her Instagram in the past few days, prompting fans to wonder if there was trouble in paradise. And in her comments section, one follower revealed they saw Scott at a bar in Chicago this weekend. So it appears Scott left Dubai early, and Tinsley deleted the photo of them she posted while she remained in Dubai with some of her RHONY costars.

Below is a screenshot of the photo Tinsley posted and deleted from her Instagram page last week. 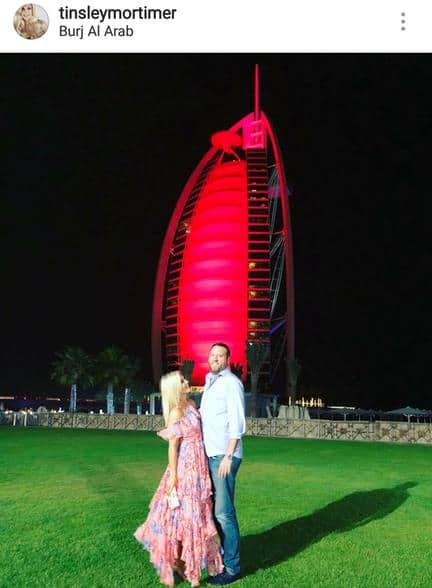 They “are still on and off constantly,” the insider added to Radar. “It’s really insane.”

As fans have seen on The Real Housewives of New York City, Tinsley met Scott through her friend and co-star, Carole Radziwill, and briefly parted ways at the end of last year. At the time, Tinsley said that their breakup was the result of the distance between them.

“It got to be a lot of pressure on the relationship,” she explained of their 2017 split. “We had to take some of that off and ease the tension, so we broke up.”