Vanderpump Rules Reunion Part III Recap: It Was About the Pasta?

by Julia May 22, 2018 14 comments
ShareTweetWhatsappPinterestRedditTumblrMailFlipboard 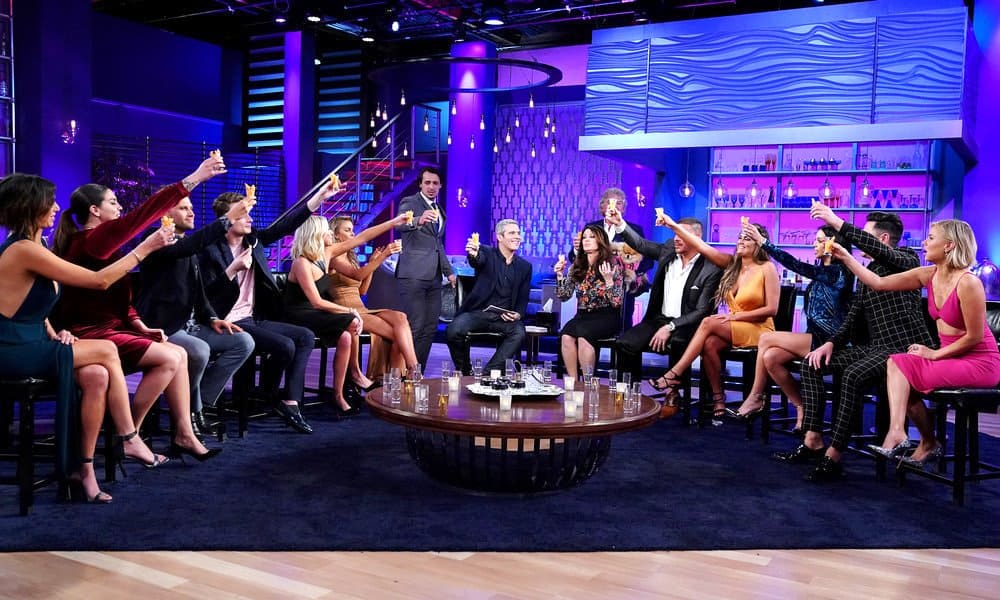 To kick things off, Andy Cohen wants to know just how in the world James and Jax have become the most unlikely besties this season. LVP explains that the two men are very similar: both very needy, both very full of themselves, and both questionably gay. Andy states: “Jax is 13 years your senior. Is he a role model for you?” (to James) LOL. That would be like the blind leading the blind. A total sh*t show. Like Andy, LaLa is unclear how these two are bros, even when Jax stirred the pot and began the Kristen/James rumor.

Before this topic gets beat to death, Andy says, “I wanna talk about something else.” Me, too, Andy. Me, too. He tries to figure out when Stassi became “an event planner” and Stassi retorts that she just wants to a “boss b*tch” like LVP. (Yea, keep dreaming Stassi. A few SUR events and a D list album release party for LaLa is faaar from LVP status.) Sandoval shares that he was displeased when Stassi came back to SUR and moved up the hierarchy quickly, becoming LVP’s planning partner in crime. He does have a point…

Ah, the infamous “it’s not about the pasta!” fight. Regarding this season’s catch phrase, James claims that, yes, it actually WAS about the pasta…but there’s more. Really, he was just super wasted and LVP claims that James should not even have a sniff of booze. Good luck trying to keep party boy sober. (Sidenote: James did not cover his mouth when he sneezed, which pretty much sums up James Kennedy in a nutshell: totally gross.) It’s not a James segment without bringing up his displaced anger towards LaLa’s man. Remember when he (always) calls LaLa’s dude fat and old? James states that LaLa is “so dramatic” when she storms off set to hide the tears that appear to be coming out of LaLa’s tear ducts.

LVP demands that Kristen “shut up” as she tries to make James see how wrong he is, and at that point, Kristen turns and stomps off, too. Because these girls cannot do anything on their own, Katie then leaves to check on Kristen, who is checking on LaLa. Clearly no one really wants to hang out on set. I mean, these lunatics don’t even cover their mouths when they sneeze! I don’t blame them.

Man, who knew LaLa had all of this power? At one point, only a few cast members remain on set. James make a half-a*sed attempt to apologize to LaLa off set, but LVP drags everyone back onto that set cuz #ratings! LVP, LaLa’s fairy godmother, demands to sit next to LaLa as she explains that she had to walk away because “James was my best friend and I would never in my life wanna tear him down or his relationship.” It’s all VERY emotional.

LVP stirs things up further by saying she thinks that James’s anger comes from a place of jealousy. James repeatedly used “her man” against LaLa and we all know that it’s mainly because he still sweats LaLa hardcore. I mean, do we have to talk about Bear?

LaLa fake cries and explains that their relationship is different now and she can’t feel safe around him anymore. LaLa reminds us that in the past she went for people’s appearances and she hoped that James would learn from previous mistakes. He apologizes (again) and it seems as though there is still hope for these two used-to-be-besties.

Jax and his Tampa hockey marketing position. Yes…the job that never was. Jax explains, “There was nothing holding him back” here in LA, not even his sweetie Brittany. Jax is so dumb as he keeps doubling down on things he has said or done throughout this whole job offer crap. Kristen explains that “He just wanted people to say they’re gonna miss him” and make him feel better about himself. Brittany explains that he really DID get a job offer, but the whole thing seems a little weird to me.

Speaking of weirdness, let’s hear more about Stassi’s then boyfriend Patrick. Because Stassi was on Xanax and alcohol, she cringes at those scenes where Patrick chats with LVP. Stassi knows that she was very clearly not her best self around Patrick and Andy wants to know if Scheana thinks she lost herself while dating Rob. Scheana spews out some BS and it later comes out that Scheana fast-forwards through other people’s scenes cuz she didn’t “have time.” She’s literally the worst.

Time to debunk the Kristen and James rumor for once and for all. Kristen is kinda my hero when she says to Scheana, “You probably don’t watch the show which isn’t cute, it’s unprofessional” and makes it VERY clear that she did not hook up with James in Mexico. Thanks for attempting to ruin everyone’s relationship, Jax, but this time, I don’t think Kristen actually did anything wrong. How does Jax survive in this world when he is always contradicting himself? Thank goodness they went back to the videotape to try and figure out what James said the day he was confronted by the dudes on the golf course.

Meanwhile, Jax is STILL unsure why he needs to apologize and Kristen gladly reminds him: “You spread a bullsh*t a*s rumor once again.” Finally, after Brittany’s chiding, we get an apology from Jax. Seems like Kristen owes James an apology, too, because she THREW a drink on him once she caught wind of the “rumor.” This crew is a mess.

Andy isn’t doing a great job of changing subjects this time. Seems like even HE is tired of this reunion. Next topic: Jax’s SUR meltdown where he flips the bird to everyone and drops the F bomb left and right whilst his eyes nearly bulged out of his head. Jax, clearly sober here at the reunion, apologizes (yet again) and it appears as though this reunion should be called Jax’s Apology Tour 2K18.

Later, even Andy cannot seem to comprehend how and why Jax decided to break up with Brittany after a summer of trying to make things work. To the naked eye, it looked like the couple got through the Jax cheating scandal, but then he has sex with Brittany and THEN dumps her. He is such a dog. Brittany died of embarrassment because she got “dumped” in the end. No one can comprehend the whole relationship nor can they figure out how and WHY Brittany took Jax back in the end. Although incredibly horrific that Jax’s father passed away, it seems as though Jax has “more softness now” and even Brittany admits that he treats her better since the death of his dad.

SOMEHOW we have reached the end of this interminable reunion. LVP addresses Jax no longer working at SUR and states that she doesn’t think she is “that desperate” to take him back again. Something tells me that’s not gonna be the case next season. Schwartzie explains that he is like a little caterpillar when it comes to business and Katie says that we should expect little ones soon-ish (gah!). Stassi shares that unless she messes up royally, we should prep for a peak at her new boyfriend next season.

Jax and Brittany seem like they’re hearing wedding bells (insert eye roll); whereas Kristen states she is good with having “two dogs and a boyfriend”….for now. Scheana, newly single, claims she is “staying single” and LaLa knows that she is with her boo forever, but there will be zero chance of him ever appearing on this show. Sandoval and Ariana are on way different pages (nothing new there) and probably won’t ever maybe someday get married and have kids.

James makes one final plug in reminding the viewers of his lame DJing parties and it’s cringe worthy when he looks directly into the camera as he does so. And LVP states that being on a reality show is sometimes like looking in a mirror: you see the good, the bad, and the ugly. Yet…it doesn’t seem like this cast is gonna back down any time soon. Despite the hiccups, breakups, and hookups during the episodes, the crew gathers round and toasts with some penne (cuz it really IS about the pasta) and we can only hope that next season brings just as much drama and excitement as this one.

TELL US – THOUGHTS ON THE VANDERPUMP RULES REUNION FINALE? DID YOU ENJOY THIS SEASON? DO YOU BELIEVE JAMES’ APOLOGY WAS GENUINE? IS JAX A CHANGED MAN? WHAT CHANGES WOULD YOU LIKE TO SEE NEXT SEASON?