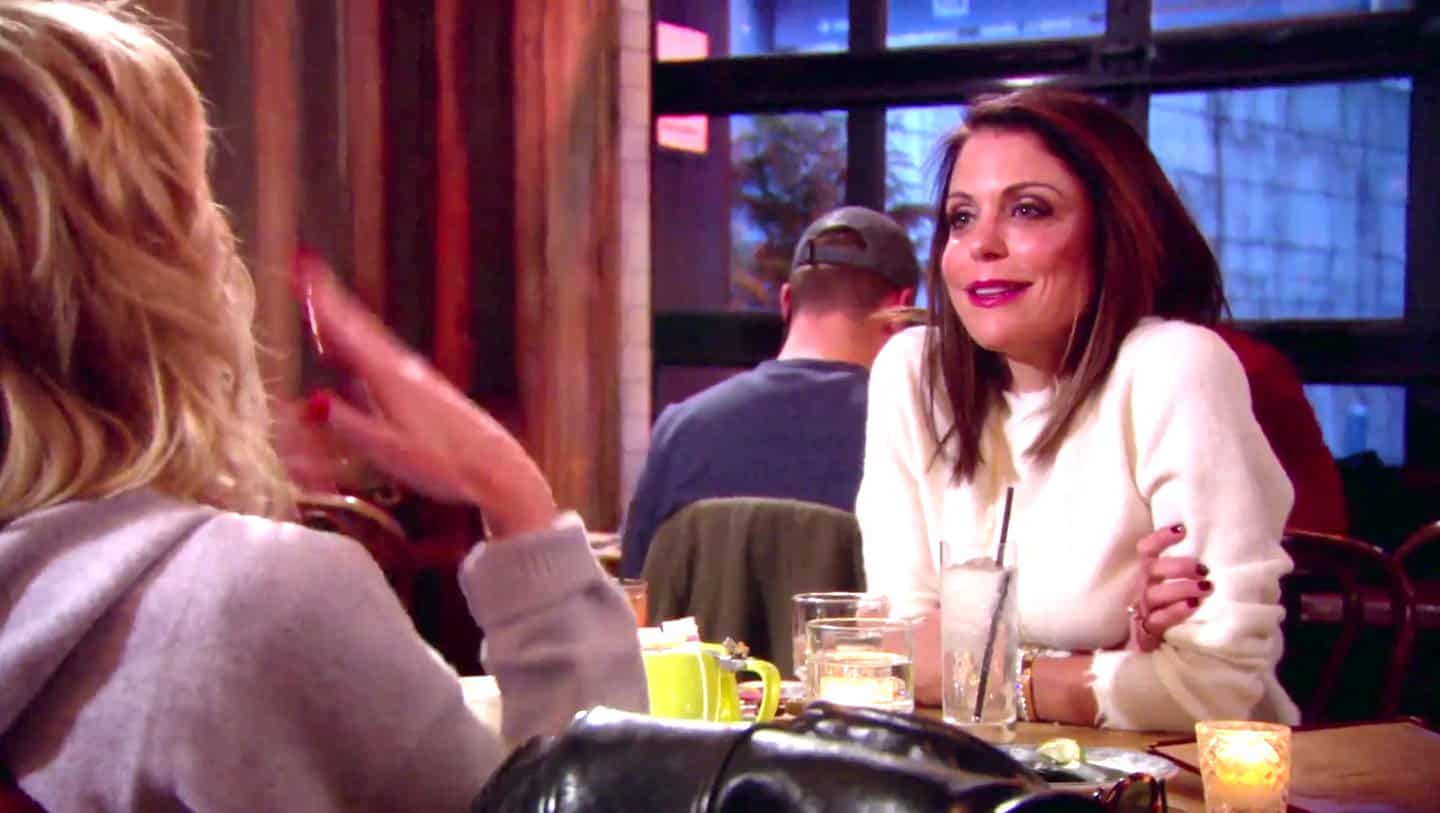 The Real Housewives of New York star, Luann de Lesseps, AKA, The Countess, loves to be the talk of the town. And boy did she get her wish last night. But she paid dearly for it!

When we picked up with the group in last night’s episode, the ladies were in full on gossip mode, trying to piece together the events leading up to The Countess’ arrest. There are just certain sentences you never think you’ll say, and yet…here we are.

The arrest took place on Christmas Eve in Palm Beach, and it wasn’t your average run in with the boys in blue. They were called to the scene to investigate complaints that Luann and an unknown man were “trespassing” in a hotel room, but within moments, things took a truly bizarre turn.

Luann, drunk and belligerent, was arrested, hand cuffed, and placed in the back of a squad car, where she began threatening to “kill” all of the officers on the scene, and reportedly kicked at least one of them, before attempting to flee.

It was crazy! And before the night was over, our girl was charged with disorderly intoxication, battery on an officer, resisting arrest with violence, and threatening a public servant. In case you’re keeping track, three of those are felonies!

The other women were shocked, but they also knew that it had been a pretty crappy year for their friend, and felt that she had taken to “self medicating” to ease the pain and humiliation of her very public divorce from Tom.

They also agreed that Palm Beach was the last place Luann should have been. In fact, Dorinda said that if she’d known Luann was planning to go, she’d have done “everything in her power to stop her.”

When Luann and Tom were together, Palm Beach had been “their town”, and they’d spent a great deal of time there. It just held too many memories, and to make matters worse, Tom was there for the holiday, as well. In fact, he was throwing a New Years Eve party at the same place where they’d held their engagement party. It was pretty brutal!

Tinsley also spent the holiday in Palm Beach, and was actually only a few blocks away when Luann got arrested. She pointed out that it’s a very small town, where everybody knows everybody else, and that Luann was right in the center of it. She speculated that Luann had likely wanted to be seen by as many people as possible, so they could all see that she was happily moving on.

Tinsley was particularly “impressed” that Luann had somehow been able to slip out of the handcuffs during her arrest. She’s been in Palm Beach handcuffs, herself, and hadn’t thought such a thing was possible. She was also feeling a little smug because although they both have mug shots in Palm Beach, hers was “just a misdemeanor.”

After being arraigned, Luann entered  a rehab facility, but her friends were able to reach out to her, and offer their support. Although Tinsley’s methods were a little suspect. Since they were both still in Palm Beach, she  suggested Luann come over for a drink!

Now you would think that with everything going on with Luann, the other ladies would give it a rest…I’m looking at you, Bethenny…but you’d be wrong. Bethenny spent a good bit of time complaining to her driver, Kevin, about how all of her friends seem to be angry at her for one reason, or another.

And for the most part they’re pretty petty reasons. Dorinda, for example, is still going on and on about not getting a “proper thank you” for that toy soldier she’d managed to find for Bethenny’s daughter, Brynn.

I’m not sure what exactly Dorinda needs, but this is ridiculous. It’s almost as though she just wants to be mad at Bethenny about something because everyone else is. And, look, thank yous are important. I get that. And perhaps Bethenny didn’t say the actual words, but come on..the woman screamed and hollered, and rolled around on the floor practically kissing Dorinda’s feet over this thing. I think it was pretty clear that she was appreciative.

Ramona was also still sore over the heated phone call she’d had with Bethenny just before the holiday. And I’ve got to say that on this, I’m team Ramona. Bethenny’s been rude and dismissive to her all season, and always has some catty comment to make. And Ramona took it all in stride, but when Bethenny called and went off on her, and accused her of enjoying the rift between her and Carole, she’d finally had enough. She angrily hung up on Bethenny, and the two hadn’t spoken since.

Of course, it was Carole that Bethenny was most concerned with. Their friendship has been off lately, and they’ve had several confrontations throughout the season. Bethenny seems to be genuinely confused about Carole’s recent coldness toward her, but if you ask me, she’s more upset about the fact that Carole’s been sticking up for herself lately, and seems to have no problem calling Bethenny out, and well…that’s just not working for Bethenny. She’s supposed to do the confronting, and everyone else is supposed to fall in line.

Most of the ladies came together for the party Bethenny had to unveil her new Skinny Girl Jeans, and it was a bit tense at first, but everyone got along pretty well. And Sonja’s antics brought some much needed comedy relief to a pretty depressing episode.

Really, how can you not love Sonja?The woman always has a blast! She spent her time dancing (I didn’t even hear music!) and flirting with the waitstaff, regaling them with all with WAY to much information, such as the fact that falafel gives her gas, and that she’s “vegan,” but can eat shellfish because “it’s raw.” Ok, so she clearly doesn’t know what vegan means, but she’s Sonja…she doesn’t have to!

Of course, the ladies discussed Luann’s predicament, as well, and they all downed “mug shots” of tequila in her honor, and had a nice hearty laugh at the expense of their friend, who was sitting in rehab and looking down the barrel at three felonies. Wow! Cold. As. Ice.

Carole was still  out of town, and hadn’t made it to Bethenny’s party, so the two met for lunch, and a long overdue chat, the following day. Bethenny was still hung over from all the mug shots, and looked tore up! She showed up wearing an enormous gray coat made out of some poor creature (emu, maybe?) that was surely as ugly in life, as it was draped on her back. Carole just looked at her like she was crazy.

But they  dispensed with the pleasantries and got down to business pretty quickly. Bethenny said that she really didn’t understand why Carole was so upset, and said she’d been hurt when she’d reached out to Carole by text to say she missed her, and Carole’s only response had been “wow, that’s a lot.”

But Carole said it didn’t go down that way at all! According to her, she’d simply said that they should wait and talk after the holiday, when they had the time to sit down together. But that hadn’t been good enough for Bethenny, and she’d continued texting over and over again.

Bethenny said that she did no such thing, and seemed shocked when she said “it’s like you’re trying to debate me.” See? Bethenny doesn’t like it when they fight back. Now, of course, this “debate” could have been solved in about 30 seconds, if one of them had just pulled out their phone and retrieved the texts. But where’s the fun in that?

They continued squabbling over the texts, and then went on to rehash their whole debate about Carole’s ex boyfriend, Adam, being unable,or unwilling, to accompany Bethenny to Houston to take pictures for her charity for free.

Bethenny swears up and down that she’d told Carole all about it at the time, but Carole insists she knew nothing about Houston, and had been shocked when Bethenny had called complaining about him for seemingly no reason.

They went around in circles for a while, with Carole bringing up every perceived slight over the last year, including Bethenny’s observation that she’d “seemed sad” the last time they saw each other. This really got under Carole’s skin, for some reason, and she insisted that she wasn’t “lonely and sad”. But she was protesting just a little too much.

You see, the word lonely never came out of Bethenny’s mouth. And Carole DID seem sad. Bethenny told her that she knew the break up with Adam had to have been very hard on her, and insisted she’d only been concerned, but she apologized for talking about it behind her back.

Carole accepted, although a bit grudgingly, and the women “hugged it out”, and continued their lunch, with, at least Bethenny, feeling that they were in a better place.

And speaking of better places, Sonja and Tinsley are roomies again! Well, sort of. Sonja asked if she could stay with Tinsley in her lavish hotel suite for a few days, while her home is under construction. Of course, Tinsley couldn’t say no after Sonja had put her up for so long, so it was on.

Sonja was excitedly looking forward to the two women sitting around in their pjs, drinking wine, and gossiping into the night. But let’s face it, a little Sonja goes a long way, so Tinsley arranged for her to stay in her own penthouse suite in the hotel. Sonja was a little disappointed, but who says no to a penthouse?! Especially when it comes with a brand new Louis Vuitton handbag. Well, certainly not Sonja! I think it will be an interesting few days.

Well, that’s all folks, but season 10 continues with more drama next week when The Countess returns to the city. Stay tuned!