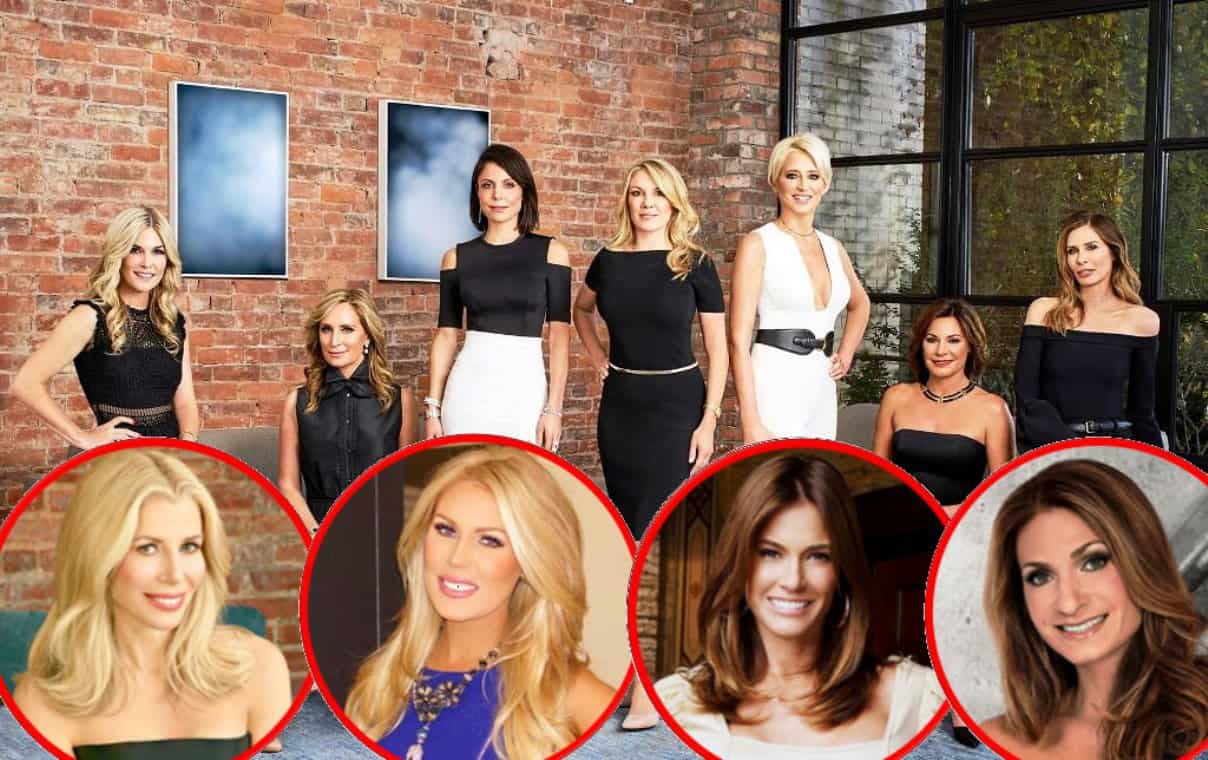 Producers of the Real Housewives franchise have reportedly made a habit of encouraging their stars to drink, sometimes heavily, during production.

According to a shocking new report, former Real Housewives of New York City housewife Aviva Drescher and other former housewives are now speaking out against producers of the Bravo TV series, claiming that the people behind working behind-the-scenes on the show had a tendency to go too far when it came to feeding alcohol to their talent.

During one instance, Aviva, whose mother was an alcoholic, claimed one of her producers requested she take a shot before attending a filming session at a restaurant with her co-star Ramona Singer.

“I told the head producer, ‘I don’t want to do a shot. Can you just fill it with water?’ And they said no,” Aviva explained to Page Six. “I was so weak and so intimidated by the production team, and I had just gone through all the negotiations of my contract for the second season and those were demoralizing. I took the shot. I felt tremendous pressure to do it.”

On a May episode of RHONY, Dorinda Medley was seen arguing with a member of Bethenny Frankel‘s Puerto Rico hurricane-relief team before Bethenny labeled her as “a drunk.” Several episodes later, LuAnn de Lesseps was seen getting arrested after getting drunk in Palm Beach and trespassing in someone’s hotel room. Sonja Morgan was also seen wasted on the show as she attempted to dance on a table in Atlantic City.

“When I see some of the drunk scenes, it’s dark,” Aviva said. “It’s gone from being funny and giddy to being drunk and depressing and it makes me feel sad.There are certain scenes where I’m just cringing for everybody involved.”

Page Six noted that the women interviewed for their article said that although producers didn’t pressure them to drink explicitly, alcohol was always ready and available — and free.

“At times, the producers would say, ‘Well, we’re not going to pay for Mr. Chow to cater your party because that’s over budget. But you’ll never hear them say, ‘We won’t pay for alcohol.’ It’s always readily available,” Aviva said.

“Everything is free, so the women drink in excess,” noted Cindy Barshop.

“You request the kind of alcohol you want and it’s there when you arrive to your villa and if you run out, they get you more,” Heather Thomson added.

Gretchen Rossi of The Real Housewives of Orange County recalled a specific incident that took place during a dinner party with her co-stars in which she became quite intoxicated.

“I woke up and thought, ‘Gosh, I never specifically went up and asked for another drink.’ My drink always seemed to be magically filled up,” Gretchen said. “So I realized that, possibly, producers were in the background going to the server, ‘It looks like Gretchen needs more alcohol.’”

Following the incident, Gretchen learned that her producers had documented the drinks she had.

“One of the producers goes, ‘Did anybody force you to drink? According to our notes here, you had two martinis, two shots of tequila . . .’ They had literally documented every single drink I had. I found that to be very strange,” she said. “It makes your stomach turn a little. It made me question what their intentions are.”

When they sign up to appear on their shows, housewives are informed that their producers “aren’t baby-sitters” and regardless of what happens during filming, they aren’t able to sue the production company or the network for defamation of character. That said, Kelly Bensimon often found herself feeling concerned that not enough was being done during certain situations, including a moment when Sonja was drunk and unable to walk by herself.

“I was like, ‘I need to bring this woman home. This is just not cool,’” Kelly said. “The producers said, ‘Don’t help her, don’t help her.’ If someone is in a bad situation, I don’t care if the cameras are rolling or not. I’m not going to let someone look bad because they are getting crazy. I know what’s going to happen once the footage airs, so let me help them out.”

“It almost ruined my life,” Kelly claimed. “When I got off the show, people said I was crazy and unhirable.”

“When we were in Saratoga at the horse race, Sonja had been drinking and the producers wanted us to go outside because she was leaving . . . and she was falling down with her suitcase,” Heather said of another encounter with Sonja. “I refused. I’m not going to put her vulnerabilities on camera . . . I felt like it was irresponsible. And the producer was unhappy that we wouldn’t go outside.”

“I think if [behavior like Sonja’s] happens once or twice, they need to let the cameras run,” Heather explained. “But if it’s reoccurring, the producers may have to question if the cast member is right for the program.”

One unnamed housewife said that she grew concerned after watching an intoxicated Sonja attempt to make out with their co-star, LuAnn de Lesseps.

“Bethenny said, ‘I didn’t realize how bad it was’ and ‘I didn’t realize she’s a f**king liability.’ And [the producers] said, ‘I know, I know.’ But at the end of the day, they invite [Morgan] back every year,” said the housewife.

In response to the former housewives’ claims, a Bravo spokeswoman told Page Six, “The franchise follows the women in their real lives. No one is pressured to drink alcohol. If the network, production company or castmates have deemed that someone is putting themselves at risk in their overall lives, we have taken and will continue to take responsible action.”

Sonja also spoke out about the allegations, noting, “I think I’m very funny when I drink. I’m very transparent on the show. For me, with my businesses [including a namesake clothing line], I can show people that I can drink, or that I don’t have to drink. It’s just good to show both sides.”

Despite the statements made by Aviva, Kelly, Gretchen, and Heather, a source told Page Six that Bravo TV has intervened with their stars in the past and actually paid for The Real Housewives of Beverly Hills‘ Kim Richards to go to rehab years ago.

UPDATE – Bethenny responded to Aviva’s claims on Twitter, denying the producers pressure housewives to drink while also taking full credit for bringing Aviva on the show.

Bethenny tweeted: “Hello @AvivaDrescher as the person responsible for putting you on Rhony, I take offense to you misrepresenting the truth & saying producers prodded you to drink. As someone here since day 1 with 13 years of reality tv experience, it is a flat out falsehood @Bravotv @andy” 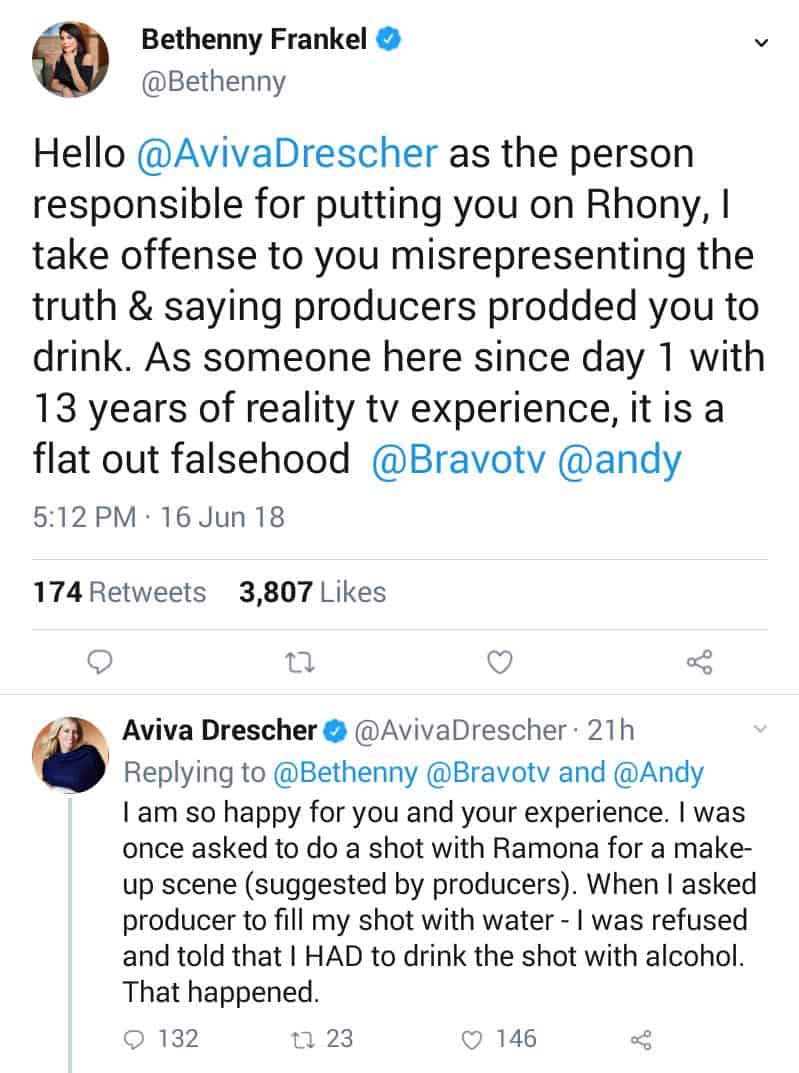 Aviva fired back at Bethenny, insisting her experience on RHONY was different. She tweeted, “I am so happy for you and your experience. I was once asked to do a shot with Ramona for a make-up scene (suggested by producers). When I asked producer to fill my shot with water – I was refused and told that I HAD to drink the shot with alcohol. That happened.”