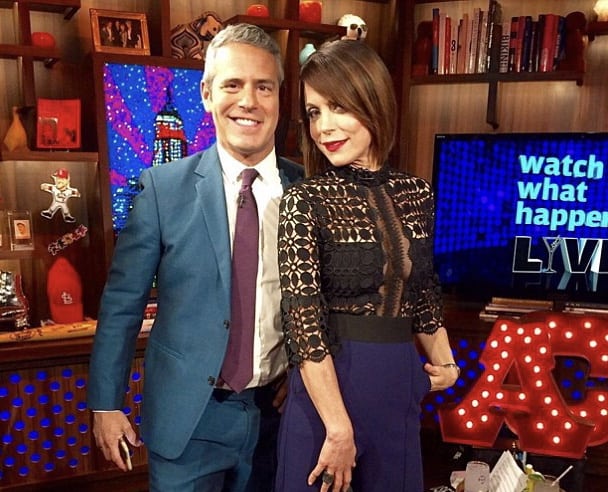 Following an article titled “‘Housewives’ say Bravo keeps the booze flowing,” Andy, the creator of the Real Housewives franchise, spoke out against the former star of The Real Housewives of New York City on his Instagram page.

“I mean, this article is so dumb,” Andy said on an Instagram story. “It’s a lot of quotes from Aviva complaining about the show, basically.”

During her interview, Aviva told Page Six that her head producer pressured her into doing a shot during filming and even said “no” when she asked if she could instead fill the shot glass with water.

“I was so weak and so intimidated by the production team, and I had just gone through all the negotiations of my contract for the second season and those were demoralizing,” she recalled. “I took the shot. I felt tremendous pressure to do it.”

Following Andy’s statement against Aviva, Bethenny Frankel spoke out on Twitter, slamming her former co-star and friend for “misrepresenting the truth” and lying about things that happened behind-the-scenes.

Hello @AvivaDrescher as the person responsible for putting you on Rhony, I take offense to you misrepresenting the truth & saying producers prodded you to drink. As someone here since day 1 with 13 years of reality tv experience, it is a flat out falsehood @Bravotv @andy

In response to Bethenny’s tweet, Aviva shared a message of her own, confirming that she had, in fact, been pressured to drink alcohol during her time on Bravo TV.

I am so happy for you and your experience. I was once asked to do a shot with Ramona for a make-up scene (suggested by producers). When I asked producer to fill my shot with water – I was refused and told that I HAD to drink the shot with alcohol. That happened.

Following the Page Six article, the network released a statement, via a spokesperson, to People.

“The franchise follows the women in their real lives,” the statement read. “No one is pressured to drink alcohol. If the network, production company or castmates have deemed that someone is putting themselves at risk in their overall lives, we have taken and will continue to take responsible action.”