Home Vanderpump Rules Vanderpump Rules’ Stassi Schroeder Calls Out “Rude” Billie Lee for Saying She Was Left Out by Cast Due to Being Trans, Tom Schwartz Calls Her “Melodramatic”

Vanderpump Rules’ Stassi Schroeder Calls Out “Rude” Billie Lee for Saying She Was Left Out by Cast Due to Being Trans, Tom Schwartz Calls Her “Melodramatic” 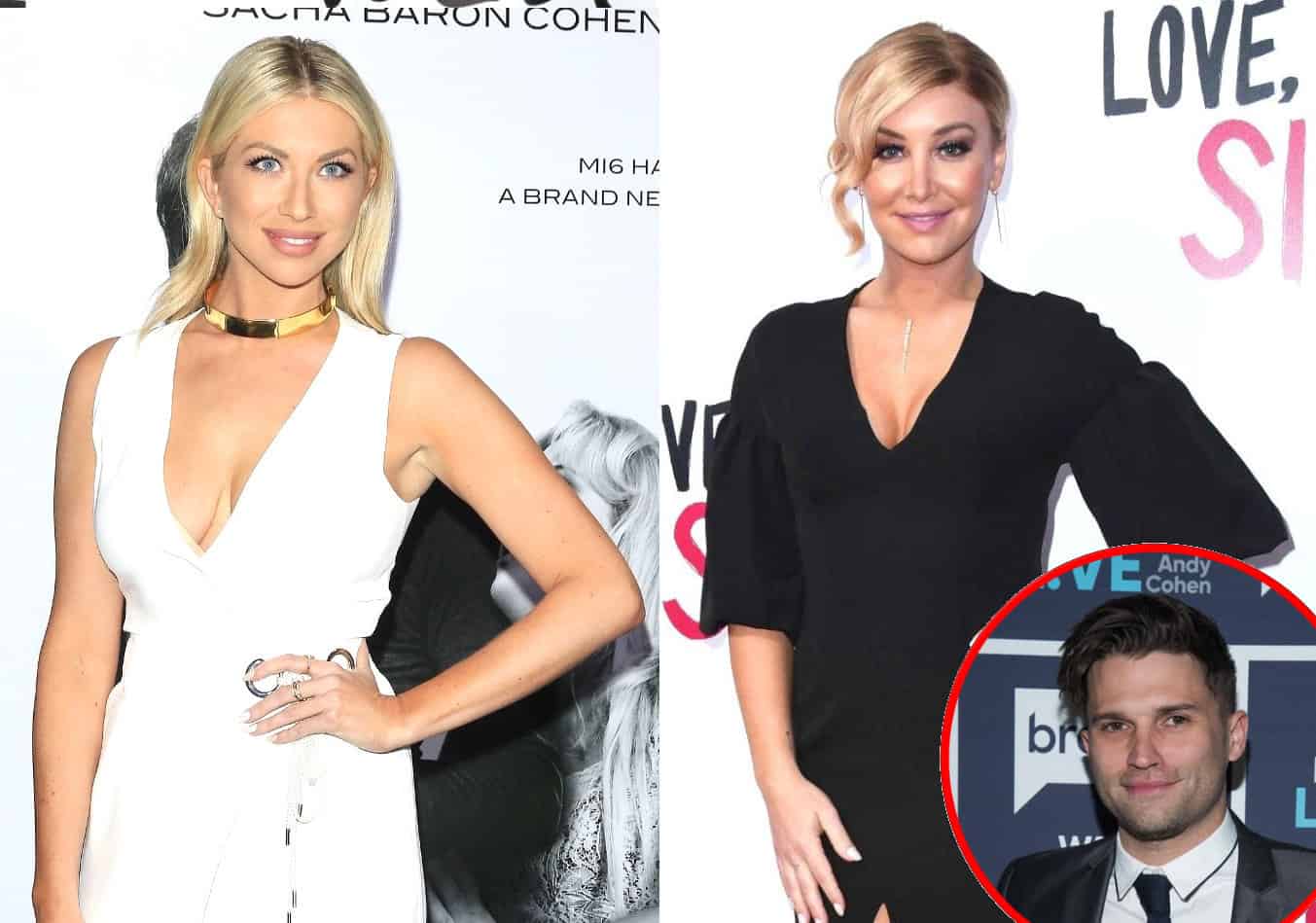 Billie Lee is now on the receiving end of some criticism and backlash from her Vanderpump Rules castmates after she accused them of excluding her from a ‘Girls Night’ event being held at the SUR restaurant due to the fact that she’s trans.

Still reeling over the fact that she wasn’t tagged in a series of Instagram posts promoting the event that took place last night at SUR Restaurant, Billie took to her Instagram page to reveal she’s going through an “awful time” while also thanking her fans and followers for supporting her throughout the ordeal.

“Stay strong Billie. You are light. You are love. #transisbeautiful#girlsnight. Thank you all for having my back through this awful time,” she wrote.

In the comments section of the post, Billie continued, “I’ve dealt with this my entire life and it still hurts. Sur is like a second home to me.”

Billie also told her online audience that her co-stars only tagged her in their posts after she requested they do so.

In response to Billie’s post, Stassi Schroeder responded and slammed her for acting as if she had been targeted by her co-stars because she is transgender. As Stassi explained, Katie didn’t include her because of her behavior, not her gender status. 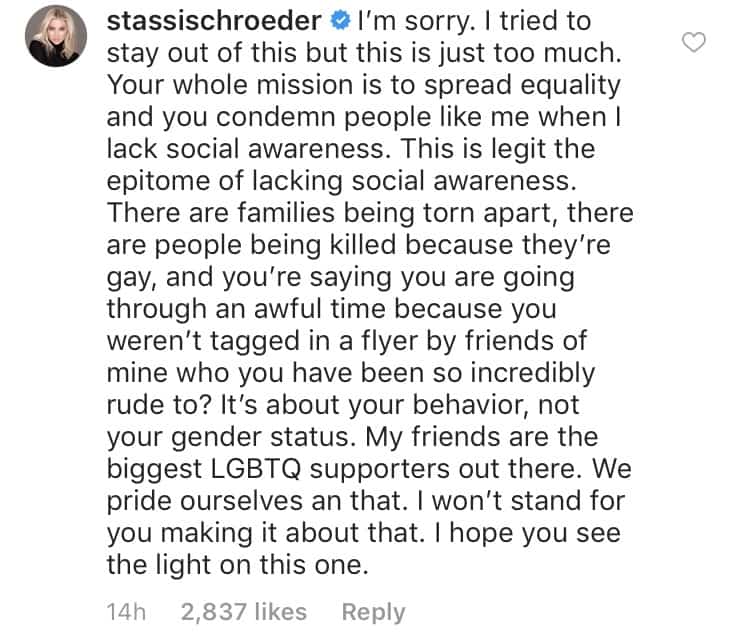 “I’m sorry. I tried to stay out of this but this is just too much. Your whole mission is to spread equality and you condemn people like me when I lack social awareness,” Stassi wrote. “This is legit the epitome of lacking social awareness. There are families being torn apart, there are people being killed because they’re gay, and you’re saying you are going through an awful time because you weren’t tagged in a flyer by friends of mine who you have been so incredibly rude to? It’s about your behavior, not your gender status.”

Billie responded to Stassi: “As a trans woman and activist, you have no idea where I’m coming from. #Transisbeautiful.” 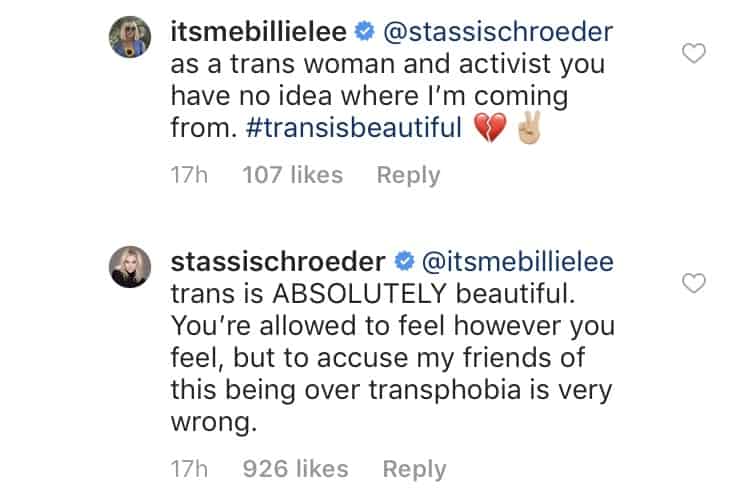 Stassi however clapped back by writing: “Trans is ABSOLUTELY beautiful. You’re allowed to feel however you feel, but to accuse my friends of this being over transphobia is very wrong.”

Billie however denied she accused her co-stars of being transphobic. “I never once said transphobia! Can you show me where you saw that? The word transphobia was never written or said by me, ” wrote Billie.

Another person who didn’t appreciate Billie’s victim mentality was Tom Schwartz suggested that Billie was making a mountain into a mole hill.

“Billy this is so melodramatic. It was a simple oversight. You are loved, chill,” he wrote. 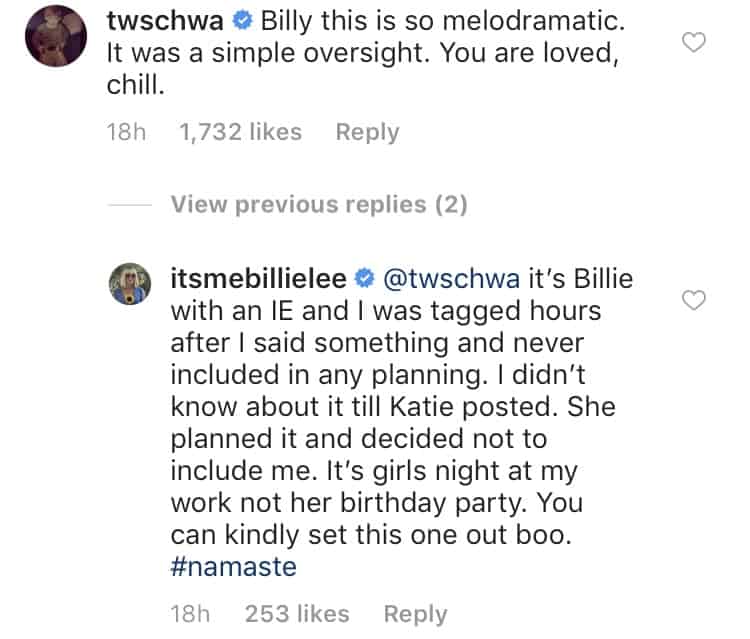 But Billie wasn’t backing down and continued to insist that her Vanderpump Rules co-stars, including Tom’s wife, Katie Maloney, had purposefully left her out.

“It’s Billie with an IE and I was tagged hours after I said something and never included in any planning,” she explained. “I didn’t know about it till Katie posted. She planned it and decided not to include me. It’s girls night at my work, not her birthday party. You can kindly set this one out boo.”

The drama between Billie and her co-stars began after the transgender star shared the tweet below earlier this week.

Following the tweet, a number of Vanderpump Rules cast members, including Kristen Doute, weighed in on the message and made it clear that they were not lashing out against her because of her gender.

And just moments ago, Billie shared an Instagram meme that hinted she was ready to let go of all the drama. That post is below.

“Your peace is more important than driving yourself crazy trying to understand why something happened the way it did. Let it go,” read the meme.