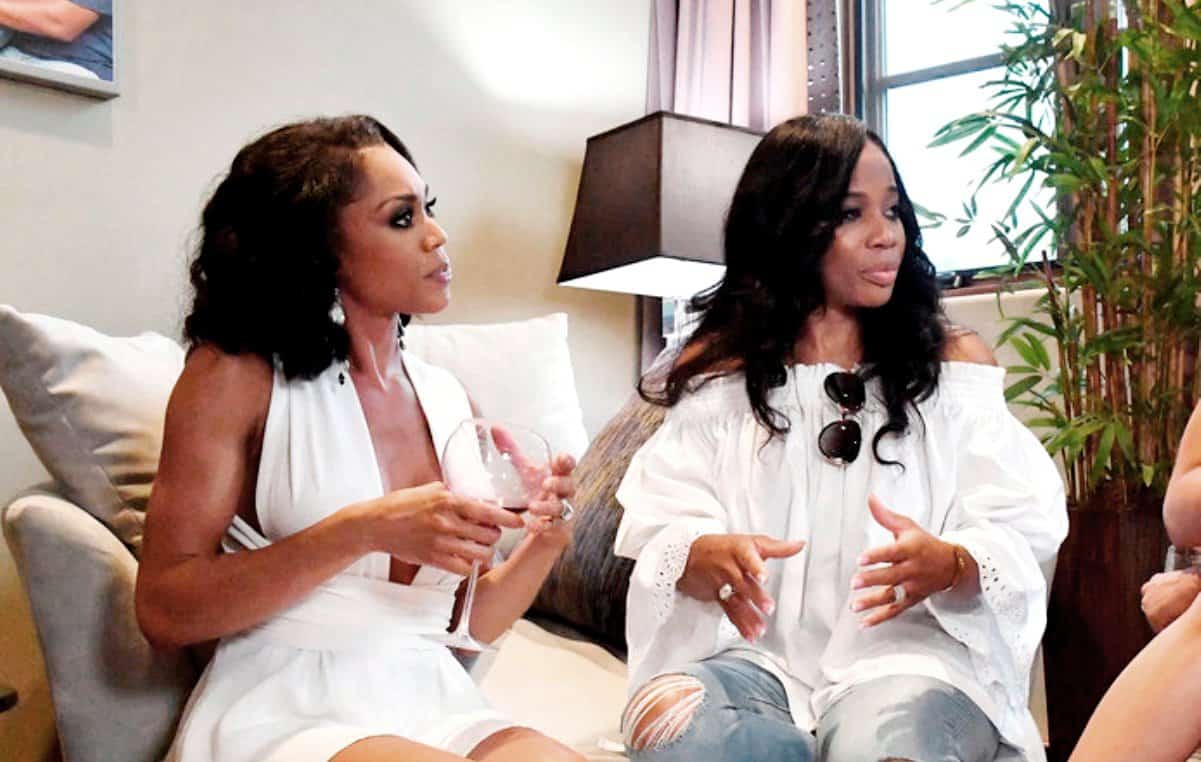 Charrisse Jackson Jordan may have taken a step back from her full time post on The Real Housewives of Potomac, but that hasn’t kept her from being knee deep in the drama!

Charrisse regularly appears as a “friend” on the show, and usually tries her best to stay above the fray, but when she saw some troubling changes in her bestie, Monique Samuels, she decided a sit down was in order to clear the air.

It seemed to go well, too. They cried, they hugged, and it appeared that the ladies were on the road to bestie-dom once more. But, maybe not. Charrisse got very candid about her true feelings in her latest Bravo blog, and the main takeaway is that she thinks Monique is a total fraud!

Now, if you were watching, you probably noticed that Monique seemed to be completely shocked to hear that Charrisse had a problem with her, but Charrisse says now that Monique knew what their issues were, and that playing dumb is all part of Monique’s game.

“Monique is a very smart woman. Don’t let that rough around the edges fool you,” she explained. “In fact, one of the things I admired the most about Monique is her vast intellect in various areas. I’ve also learned that she can be very calculating. She knows exactly what she is doing, but portrays a sense of naiveness to camouflage her deceitful tactics. She knew exactly why I was upset, but played on my emotional side to skit through the issue. She played me!”

And things did get pretty emotional! Monique turned on the waterworks less than five minutes into their conversation, and while it tugged at Charrisse’s heart strings in the moment, she said she won’t be falling for it again.

”It looks believable. I fell for it. How could you not? Monique is a great actress that has missed her calling. However, the truth always comes to light. Fool me once, shame on you. Fool me twice…NOPE! I won’t be fooled again,” she wrote.

Ok, I’m not sure that’s exactly how the saying goes, but the gist is that Charrisse says she sees right through Monique’s facade. At the time, Charrisse was pretty emotional herself, but she says now that her tears actually had little to do with Monique, and that their sit down may have been a waste of time.

“I am the queen of Emotional! A trait I wish I could erase. I was already on an emotional high, I had just buried one of my best friends the day before. I was still going through major transitions in my personal life paralleled with making a lot of bad decisions with business and friendships. My emotional levels were at an all-time high,” she explained. “To see her cry the way she was crying broke my heart. After all, she is someone I consider a friend and she is someone that I truly cared about. When my friends hurt, I hurt as well. Who knew it was a lot of wasted emotions?” she added.

This sounds pretty serious, and it’s hard to miss the fact that Charrisse spoke in the past tense, but they certainly wouldn’t be the first friends to break up and make up on this show, so only time will tell.

You can continue to watch it all unfold every Sunday night at 8/7c only on Bravo!