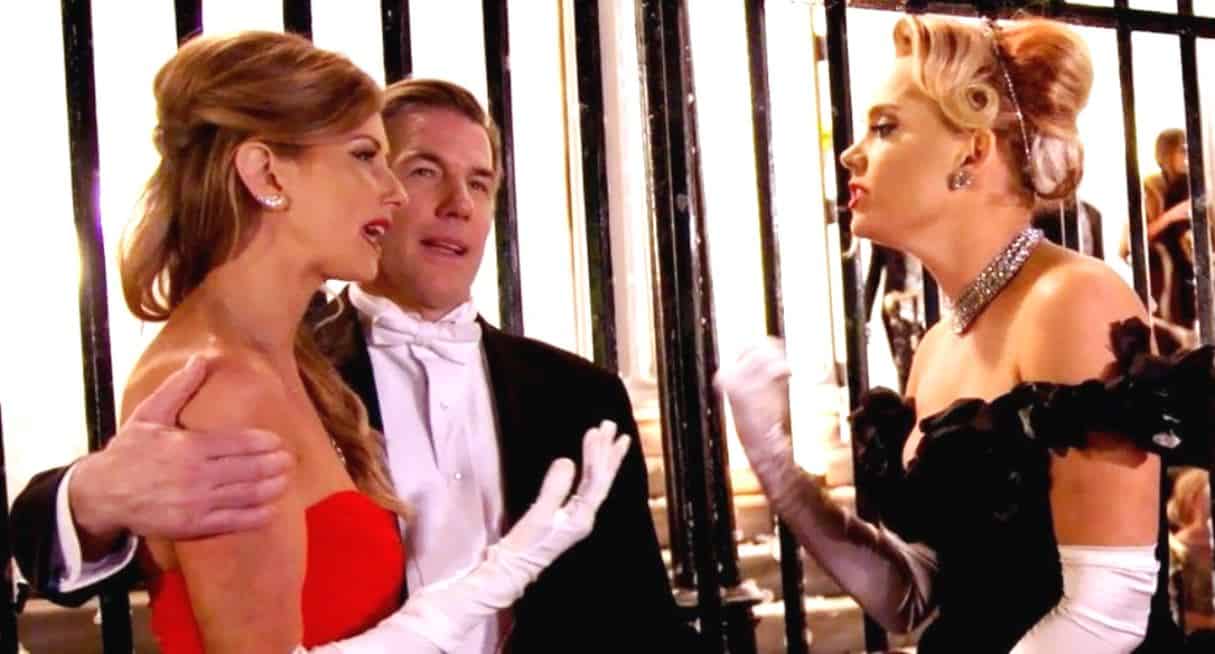 The season finale is here and there are so many loose ends that need to be tied up. I’m crossing my fingers that Kathryn finally decks Hurricane Ashley at Patricia’s Winter Wonderland ball on this episode of Southern Charm. It’s been a loooong time coming!

Over at Craig’s bachelor pad, it looks like a storm blew through and he is certainly not in any position to be having guests over. Poor Cameran rolls in and is beyond skeezed by the current situation at Craig’s crib. The duo discusses Palmer and Craig’s lack of vocational drive. Looks like Craig’s more concerned about his pillow passion than his law future. Leave it to Cam to make him feel like a moron about this pillow venture and she does the best she can to keep a straight face as Craig displays his work proudly.  Craig is unclear about what he should be doing and Cam lets him know that it’s time for him to stick to one thing and “follow through.” I mean, the guy can’t even stick with his life coach for crying out loud.

Naomie pops over Kathryn’s apartment and gets filled in on Kathryn’s convo with Thomas. Kathryn tells Naomie about Thomas’s current relationship with Ashley. Kathryn also shares the newest rumor. “I got a message on Instagram and I just want you to know that Ashley is a high-end escort for polo men in Santa Barbara.” WHAAAAT. Naomie repeats this rumor, as she has heard it as well. Well that would make a lot of sense, huh? Continuing on uncomfortable topics, the girls discuss Patricia’s ball and Kathryn makes it clear that she is very nervous about attending the event. On that note, Naomie shares that Craig is bringing a date to the ball and pretends that she doesn’t really care, but we are all aware she is super jealous.

An increasingly crabby Craig and hungover Austen get fitted for their evening wear attire. Patricia insists the men wear tails or, according to Shep, look like “Storm Troopers.” Riiiiight. These guys look like a bunch of penguins and do their best to hold a serious convo about Thomas and Ashley. Craig says that it seems like Thomas just “throws money at her” to keep her happy and if that’s the way this relationship goes, where do I sign? Just kidding.

The glitzing and the glamming begins for the Winter Wonderland. OMG. Ashley’s robe with her name written in glitter on the back has me dying. She looks like she is in a bridal party. Bet she wishes it was a bridal robe for sure. And when Thomas whips out a small box for Ashley, you can tell that she thinks it may actually be a ring. She feigns interest in her locket and slowly dies inside. The couple have chosen to fight through the “adversity” and try to make their relationship thrive, despite Ashley’s absolute hatred toward Kathryn.

Meanwhile, Chelsea, clad in fur, sits and hears out Kathryn’s fears as she gets ready for the ball. Kathryn shares, “I googled the sh*t out of the history of the white tie party” so there is no room for Patricia to pick out Kathryn’s flaws. Man, this chick is truly nervous about her first interaction with Patricia in years. Kathryn is out to prove that she has changed for the better and I am rooting for her.

Upon arriving to the ball, I am underwhelmed with Patricia’s outfit. Like, put on some HEELS, Patty. The whole crew begins to trickle in and Thomas and Ashley even get a blast from the past meeting with Jennifer of seasons’ past. Everyone is decked. In the words of Cam, “it’s like the Titanic.” Ugh. JD with his double-breasted fur. Ew. I hate him so hard. He even has the audacity to point out ex Elizabeth’s revealing dress. I am pretty sure he is wasted already and I am pretty sure he just gets more obnoxious every time he gets screen time. People mingle and Naomie shares with Dani, Jennifer, and Cam THE rumor she discussed Kathryn. You know the one where Ashley is an escort. No one seems very surprised by this rumor.

Later, when Craig enters with his date Bella, Naomie goes as red as her dress. Jealousy is not a good look. Cam asks “what kind of date this is” and I love her for always saying what everyone else is thinking. Naturally, Craig dances around anything to hold him accountable, and luckily for him, Kathryn and Shep arrive, making a ridiculous entrance. Obviously, Thomas goes gaga over Kathryn, but Patricia is not as excited to see her. “So the red-head walked in” and Patricia is hoping that Kathryn shows the new side of her. But wait, is Kathryn drunk? I hate to even utter those words, but why is she waltzing around the room (not saying hi to Patricia) and having difficulty taking her gloves off? Maybe she is just super nervous. I hope that’s the case, because otherwise there is ZERO reason for her to be biting her gloves off finger by finger.

Over dinner, Jennifer asks Ashley if she gets along with Kathryn and Ashley actually says she “burned that bridge a long time ago.” And she seems proud of this fact. Ashley goes even further by stating that she tells Kathryn that, “Every night you lay your head down on the pillow and you think about how Ashley Jacobs is winning.” Um, excuse me, what??

In the mean time, Kathryn begins running her mouth about THE Ashley rumor and now more and more people are hearing more and more details about this “escort service.” Austen excuses himself from the table only to walk over and interrupt a conversation between Jennifer and Thomas. Austen then proceeds to spit out THE rumor— the escort rumor. Way to stir the pot, Austen. Austen justifies his telling Thomas by saying that if there was a rumor flying about HIS girlfriend, he would want to know. Understandable. Kind of. But is this the time or the place?

Austen tells Ashley that, “I’ve never seen you do anything except spend his (Thomas’s) money.” Touche, Austen. This is turn makes Ashley whip out her card to PROVE that she is a nurse, and not an escort. My goodness. This does not seem like ball etiquette. Thomas tries to make Ashley “rise above it,” but the damage is done and the drama is growing.

Whilst dancing, Shep gives Kathryn a pep talk so she can greet Patricia…FINALLY. Kathryn stumbles over to Patricia’s table and thanks Patricia for the invite. Surprisingly, Kathryn does a lovely job of redeeming herself five years later and the gals have a very awkward sit down chat that hardly anyone can believe is happening. Thomas beams in the background like a proud father, and I can’t help but gag. Patricia seems to be impressed by Kathryn because she has a job…unlike Ashley. Later, Kathryn explains to Shep that she is “at peace” with the whole Patricia thing and I am happy for her.

Another awkward conversation (tries) to unfold at the table. Craig attempts to talk to Naomie and she denies him a chance to talk in private. Craig apologizes in front of everyone at the table, but Naomie cuts him off abruptly by telling him to “go away.” Ouch. So much for a relationship reunion.

Once Kathryn steps out for a cig and Ashley follows, we all brace ourselves knowing that it’s about to go down. Now that the women are alone, Kathryn explains she has “resolved her issues with everyone in the room, including Patricia.” Shockingly, Ashley apologizes to Kathryn and Kathryn explains that it is hard to trust her considering Ashley’s cruel words. This makes Ashley angry and she spits out, “Don’t deflect. Let’s not forget your kids were taken away from you.” And now we have gone from zero to sixty. Kathryn: “I don’t think I could ever forget that actually. All you are is a gold digger and no one f*cking likes you, including your boyfriend.”

Ashley: “I am not going anywhere, so get used to thiiiiiiiiiiiiis.”

Back and forth these girls go. They try to one up each other and claim that they have the better relationship with Thomas. It’s pathetic to watch. And then Ashley threatens Kathryn, you know, on national TV! Ashley throws out another good one liner, insinuating she is planning on blackmailing Kathryn: “Just be careful because I know a lot of information.” She continues to go low with, “Guess what Kathryn, I’ve got the life that you want, that’s why you’re so threatened. God bless.” Once Ashley heads back inside, she runs right to Thomas and fills him in on the fight and Kathryn calls for Thomas from outside.

Thomas is LOVING this drama centered around him and heads over to hear Kathryn’s take on the events that unfolded. Kathryn states, “Your girlfriend is a f*cking psycho.” While they talk, Ashley hollers, “Come on Thomas, don’t be a p*ssy. Wake up and tell her we aren’t going anywhere. Baby mama- stay out of this. Go find someone else to go screw.” Uh, what? As Thomas and Ashley head out of the event, we can hear Ashley saying to him, “Can we just give each other a hug because everyone thinks we are like, breaking up.” This is hurting my brain mainly because this woman is a complete lunatic.

Just when you thought it was all over, Kathryn makes one more stab at this chick, Ashley. “Look me in the eye.” She basically tells Ashley to eff off, Ashley asks, “What’re you gonnado? Hit me?,” and then Ashley made crude statements about Kathryn being an egg donor and not a real mother. DID ANYONE ELSE SEE THOMAS’S SMIRK THROUGHOUT THE ENTIRE ORDEAL? Way to step in and be a man. I hate him MORE than I hate JD. We will leave this recap with a fabulous quote from the ever classy Kathryn as she walks away from Ashley, “Pray for yourself you f*cking c*nt.” And I think that pretty much summarizes this season of Southern Charm in a nutshell.

(Yet somehow…six months later, Ashley and Thomas are STILL together. #mindblown). We also get an update on Kathryn as it’s revealed she now has 50/50 custody of her two kids with Thomas!

TELL US – THOUGHTS ON THE EPIC SOUTHERN CHARM FINALE? IS ASHLEY CRAY OR REALLY CRAY CRAY? WAS THOMAS ENJOYING THE CATFIGHT? ARE YOU GLAD PATRICIA AND KATHRYN FINALLY MADE UP? WAS NAOMIE TOO MEAN TO CRAIG?