The Real Housewives of Potomac Recap: Le Shade Is Real 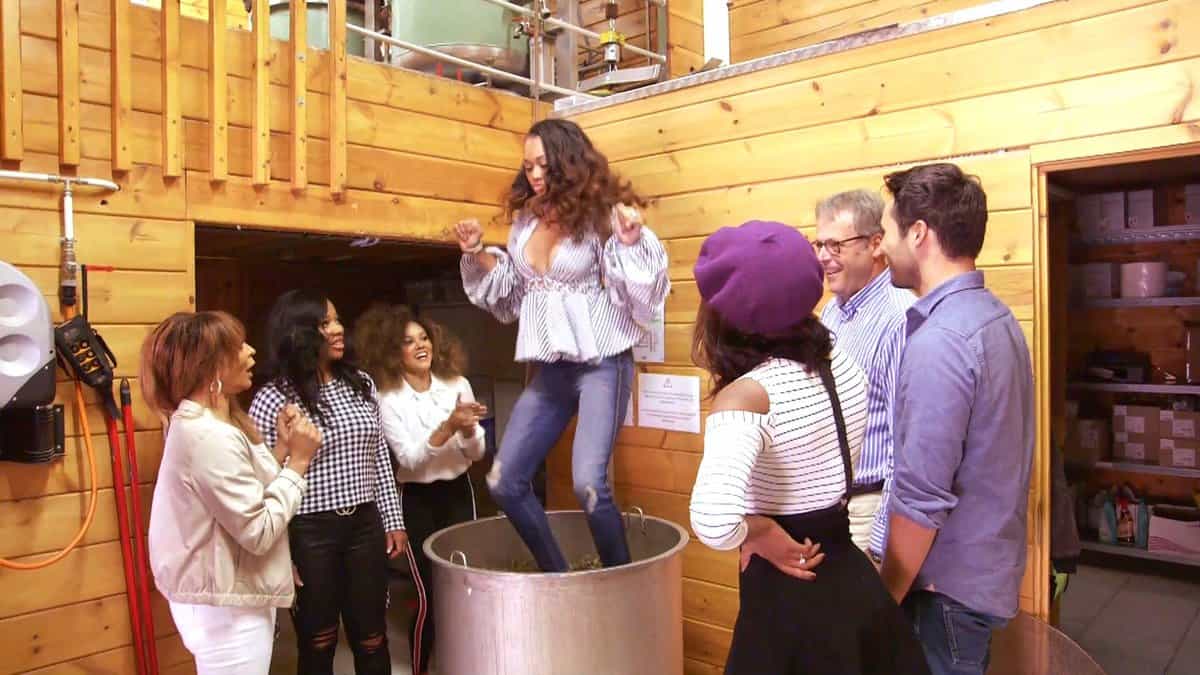 The ladies of The Real Housewives of Potomac continued their trip to France in last night’s episode, and as usual shade, backstabbing, and deflection ensued.

When we picked up with the ladies, Karen and Gizelle were still screaming at each other, following Gizelle’s shocking accusation about Karen’s husband, Ray!

The other ladies were concerned about the fact that “the white people were watching,” and quickly made their way out of the lobby, and set off on their tour of the essential oil distillery Monique was dragging them to.

She’s REALLY into essential oils. The other ladies, not to much.  But, at this point, they just wanted to get the hell out of dodge, so they left Gizelle in the lobby to wait for Robyn, who had overslept.

When Robyn arrived, Gizelle told her the others didn’t want to wait, but that wasn’t true. They were actually dying to wait! They’d have done anything to postpone that oil distillery trip.  But Gizelle and Robyn went off in search of crepes, and made their way to the distillery a little later.

Well, a lot later, actually.  They arrived just in time to see Charrisse, Monique, Ashley, Candiace, and Karen strutting down the steps arm in arm. Talk about perfect timing.

Robyn jokingly called the women out for leaving her, and they all told her they had wanted to wait. Gizelle was caught! Not that she cared. She had no desire to go on Monique’s field trip, and freely admitted she’d only come on the trip to hang out with Robyn, anyway.

Reunited, it was time for the ladies to venture into a perfumery for the second leg of Monique’s field trip. This was of particular interest to Karen, as she’s launching a fragrance line of her own.

She bonded with the owner, and as they spoke about the business, Gizelle couldn’t help but to chime in with a few seemingly innocent questions that were really only meant to get Karen’s goat. For once, Karen resisted the bait.

Next up, it was time for dinner, and once the ladies were all sitting face to face and sipping on cabernet, they got down to some real talk, despite Monique’s plea for a peaceful night.  Lol…peaceful! Monique is so precious.

Karen spoke up first. She apologized to Gizelle if her questions about her cosmetics business the night before seemed shady, and explained that she was showing genuine interest, and was actually really proud of Gizelle’s success.

Gizelle accepted Karen’s apology, but stopped short of reciprocating.  She said that Karen seemed very defensive lately, and when Karen said that it was because she had been going through a lot lately, Gizelle asked if her troubles had anything to do with the conspicuous absence of her wedding bling.

It didn’t really seem as though anyone else had noticed, but once the chum was in the water, the women circled Karen like a school of great white sharks.  Karen tried to play it off, and insisted that everything was fine between her and Ray, but Ashley piped up and said she’d heard differently…from Ray, himself!

Well, that stopped everyone in their tracks and Ashley was more than happy to oblige when they implored her to continue.  She said that Ray told her that he was packing his bags and moving to Florida, with or without Karen!

It sounds like something he likely would have said as a joke. I mean, who would actually say that? And especially to his wife’s friend, whom he barely knows. But joke, or not, Ashley had Karen in the hot seat, and she was loving every minute of it!

Karen again assured everyone that everything was fine, and that although Ray did want to move to Florida now that he was retired, he certainly wasn’t going without her.  She added that her concerns were her aging parents, her business, and Ray’s tax issues..nothing more. The matter was dropped pretty quickly, but Ashley wasn’t done calling people out.

She’s an odd person, that Ashley.  You’ll never catch her in a lie, or talking behind your back, because she literally says any and everything that’s on her mind right to your face.  It’s honest and straightforward, and you always know where you stand, but damn, can it get messy! She has to be a producer’s dream!

This time, it was Charrisse’s turn to get the Ashley Treatment.  She said that Charrisse had been talking about Monique behind her back, and that the things she had to say really weren’t very nice.

Charrisse tried to deny it, and went so far as to call her a “bold faced liar,” but Ashley was undeterred, especially since Gizelle and Robyn were right there to back her play.

They agreed that Charrisse had, indeed, told them that she felt that Monique was using her for her social contacts.  And it was true..she had.  But this was news to Monique, who considers Charrisse one of her closest friends.  And although things had been awkward between them for a while, Charrisse had said nothing about her contacts when the two women had sat down to talk.

Now, of course, when Charrisse said “contacts,” she was speaking specifically about Kyndall Douglas, Gizelle’s ex boyfriend, Sherman’s ex wife. Charrisse and Kyndall go way back, and she’d been the one to introduce her to Monique, but she’d  acted shocked and appalled to find out that Monique had invited her to a charity event.

Monique said that it was actually Charrisse who wanted Kyndall to start coming around in the first place, and that she’d invited Kyndall to an event of her own well before Monique had! As Charrisse squirmed, she knew she finally had to come clean.

She admitted that she had, in fact, invited both Gizelle and Kyndall to her Hurricane Harvey fundraising event, and had looked forward to a funny and awkward moment then the two women saw each other. But it never happened but that  because Gizelle had quickly dropped off her donation and left, and Kyndall hadn’t shown up at all.

It was all starting to make sense now, and the ladies just shook their heads, while Ashley crowed with laughter, pleased to have accomplished her goal.

Charrisse explained that she and Gizelle had “some issues,” but that’s hardly an adequate excuse, since they’d squashed all of that at the season 2 reunion..they even kissed! Gizelle said it wasn’t cool, but didn’t really seem all that angry, and surprisingly the matter was dropped rather quickly.

Never one to let everything not be about her for more than 5 minutes, Candiace just couldn’t take it any more. She piped up to say that since everyone was airing their grievances, she wanted to address the fact that Gizelle and Monique had laughed in her face the night before when she’d mentioned her pageant title.

She was near tears, and genuinely seemed distressed, but Gizelle and Monique couldn’t help themselves..they burst out laughing all over again!

Poor Candiace! She hasn’t the slightest clue how annoying she is.  Monique quickly regained her composure, apologized, and explained that they’d laughed because Candiace spoke as if  she were “famous, or something,” and it had just been a bit much.  Gizelle didn’t even give her that much. She simply laughed a little more quietly.

Candiace decided that if she was ever going to make it in this group, she’d need some help. And who better to guide her than The Grande Dame, herself? And she got schooled…again!

Karen had tried to explain to Candiace before that if she told these women too much, they’d twist it around, and use it to exploit her vulnerabilities later, but she hadn’t listened.

Karen also pointed out her “bad timing” in confronting the women at dinner. She explained that if she had an issue with the wonen, she should take control of the conversation, and talk about it in the moment, instead of waiting.

When Charrisse arrived, she offered further insight into Candiace’s trouble with the women.  She said that Candiace talked about her self too much, and it often sounded braggadocios.

Karen agreed, and added that there was surely more to Candiace than pageants and privilege, and she should let the world see the it. I’m it so sure about that, but Candiace seemed to like hearing it.

In the meantime, Monique had the bright idea to walk her little narrow behind across the hall, and knock on Gizelle’s door to invite her to breakfast. Now, Gizelle could not have been more clear about the fact that she is not feeling Monique, but nevertheless, Monique persists in trying to get close to her. I almost felt bad for her…almost.

Gizelle didn’t even try to hide her disgust when she opened the door to find Monique waiting as eagerly as a puppy. She rolled her eyes dramatically, and said it was “much to early” to deal with Monique. Monique tried to laugh off the dismissal, although, it didn’t seem like Gizelle was joking, and all but begged her to come over and talk.

Now, Gizelle may not like Monique, but the girl does like to eat..and who can turn down chocolate crepes?  So she walked over without even changing out of her robe, as though it were the biggest chore of her life.

After sitting down, and digging into her crepes, Gizelle asked Monique what she wanted to discuss, but her tone said she really wasn’t interested.

And here’s the funny part..well, maybe a little sad, too: Monique announced that she’d awoken that morning  feeling as though a weight had been lifted because Gizelle finally knew it had been Charrisse who’d wanted Kyndall around, all along.

Now, you know that feeling when you were about 5 years old, and you’d get an ice cream cone, and be all excited for that first bite, only to take one step and drop it in the dirt? Well, that’s exactly what Monique looked like when Gizelle informed her that she wasn’t off the hook in any way, shape, or form.

Monique tried to defend herself, and said that she’d only gone along with Charrisse, but Gizelle said she’d done a lot more than “go along,” she’d actually “spearheaded” some of it too, because she’d invited Kyndall to her event, and Charrisse had nothing to do with that.

Then Gizelle looked her directly in the face, and said that she “took her shot and missed,” but that when she shot back, she’d “never miss.” Monique looked like a deer caught in headlights, but Gizelle just stared back stone faced, never once blinking. I think it’s safe to say her message was received.  And I think it’s also safe to say that Monique won’t be inviting her for crepes again.

These women are a trip! And speaking of trips, la vacation de France continues next week, and so does la drama. Until then, cherie!