Home Below Deck Below Deck Mediterranean Recap: We Used To Be Friends

Below Deck Mediterranean Recap: We Used To Be Friends 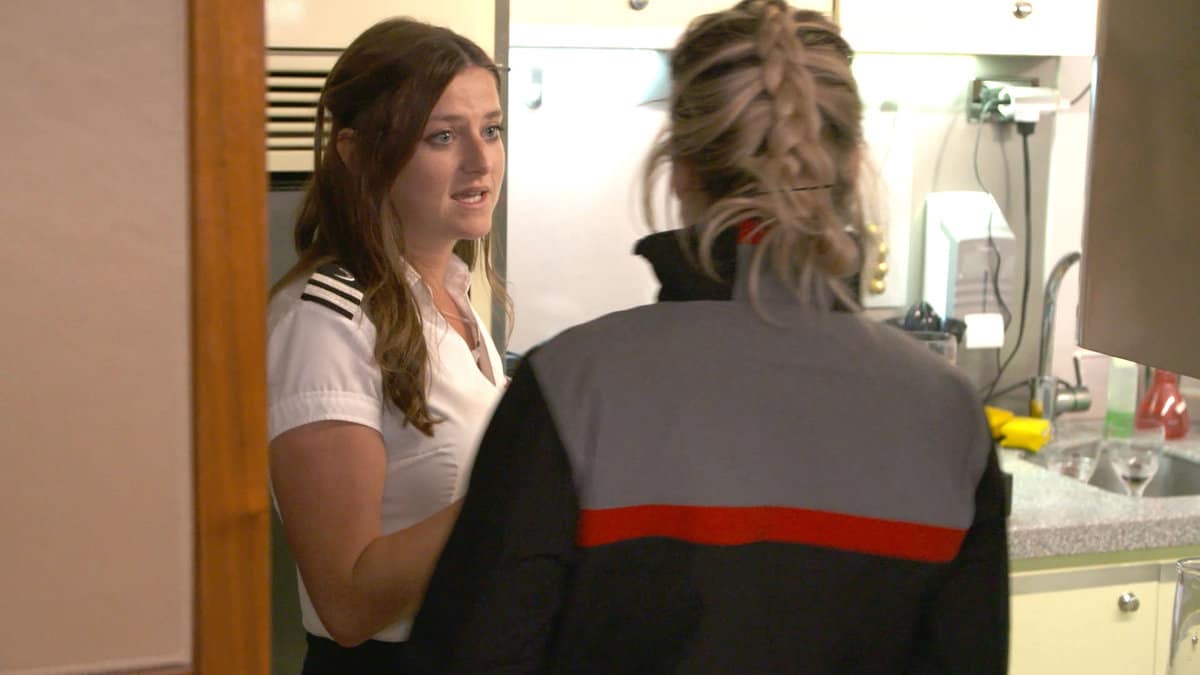 Hannah and Conrad are on again, but that doesn’t stop everyone’s least favorite chief stewardess from sucking the fun out of all situations on this episode of Below Deck Mediterranean.

In case ya’ll forgot, here’s a quick reminder. Joao was “snapping d*ckies” with Kasey’s phone, Hannah witnessed this occur, and therefore Hannah ran to Brooke to rat Joao out. While Brooke listens to Hannah relay the information, she knows that “It’s really hard to take anything Hannah says as the truth, especially when it comes to Joao.” However, this time, Hannah did not over-exaggerate. Kasey and Joao are sickeningly touchy-feely and even Kasey states that she is fine having a “flirty friendship” with Joao. Hands off, gf.

Post the d*ck pic scandal, the gang rolls out to a fancy shmancy dinner. Brooke rocks oodles of Hannah’s expensive jewels and nearly knocks one of the designer earrings off the balcony on which they were sitting. Hannah momentarily freaks, as she fears her expensive jewelry has fallen to the water below and because of her reaction, Joao states, “Talk about materialistic.” Hannah becomes defensive immediately. Before even having a drink, Joao and Hannah are at each other’s throats. Hannah’s got a puss on and can hardly handle her boo, Conrad, even holding a conversation with Joao, her enemy. The tension at dinner is so thick you could cut it with a knife. Once dinner is over, Joao and Brooke stay for one more glass of wine. Joao shares that he is tired of Hannah because she constantly “asks for it and no one says anything.” The convo then turns to Brooke and Joao’s budding “relationship.” Brooke admits that she is questioning Joao’s intentions because she doesn’t want to get hurt. Same story. Different day.

Back on the boat and before bed, Hannah and Conrad have a night cap. Hannah can’t WAIT to lay into Conrad since he was “basically having a date” with a guy who just called her materialistic. I love how Conrad tells big H that there’s no reason for her to make every situation an issue. I actually clapped. Conrad admits he is “starting to lose a little bit of faith” in their relationship. I mean, I am not 100% sure why Hannah is so very offended about being called “materialistic.” She IS materialistic. And there are WAY worse names in the book, many of which totally describe Hannah perfectly.

The next morning, Hannah can be found with her lips on Captain Sandy’s a*s, Brooke gets jealous when Kasey makes Joao tea, and Captain Sandy introduces the crew to the next charter guest, a motivational speaker. Fabulous. I feel like Hannah is going to last ten seconds with this upbeat charter who evidently want to sit around in circles singing kumbaya.

Due to the wind, the yacht is staying put in the dock and this is going to call for some creativity. The crew greets the happy-go-lucky guests and the primary’s hair is somehow not even moving in the high speed wind. Hannah gives the tour, the guests smile in an unnatural way, and the primary speaks in motivational quotes such as “live, laugh, love,” and “God is love.” (or something like that)

As everyone settles in, Brooke prepares snacks for the charter and Joao schmoozes with the guests/tells his life story. This in turn causes the crew to become frustrated. That is never a good thing…particularly because this is an exceptionally difficult charter considering that they are battling high winds. Things get even worse when Colin and Conrad take the guests on the small boat over to Castel Dell’Ovo. Turns out, Hannah forgot to pack the vodka for the non-beer drinking primary charter who only wanted a Bloody Mary. It appears as though she can kiss her tip goodbye…

Everyone is back on the yacht and Hannah struggles to recover after she dropped the ball. For lunch, Adam serves a crazy good looking Thai meal as the primary charter recites “original” quotes like “Receive it. Believe it” followed by my other fav, “Guys when you bless food, it actually changes the molecules….” Wait, huh?!

Kasey and Brooke continue to question Hannah’s leadership skills and Joao becomes the 9th guest on the charter. Joao gets caught on camera chatting it up and sitting down with a guest. Conrad makes it clear that he does not want Joao doing that again and of course Joao runs to Captain Sandy. Sandy tells Joao that it’s good to engage with the guests and Joao breathes a sigh of relief. (Side note: Please tell me you caught the primary charter talking about his dad giving exorcisms?! Who is this man?)

Brooke is running around like a chicken without a head, following Hannah’s contradictory orders. She is ever the sport and does as she is told. Brooke says that she feels like a “ragdoll” tonight and thinks that she is getting pushed around. Brooke is no dummy. She believes that Hannah is lashing out on her because Hannah doesn’t like Brooke having a relationship with Joao. I think it’s more than that. According to Joao, Hannah is a “master manipulator.” Brooke is realizing that Hannah is the front lady who gets all of the glory and she has had it with her antics. Even Joao and Colin are getting annoyed with the “leaders” of the boat. Finally, Brooke voices her opinions to Hannah and she doesn’t hold back. “I don’t actually know what you are doing throughout the day and I feel sometimes like you’re taking advantage of me.” Hannah does not lay down without a fight. She reminds Brooke that she is a just a stewardess and what she is doing is part of her job…but all I see is Hannah on break while Brooke does damage control for all of the messes Hannah creates…